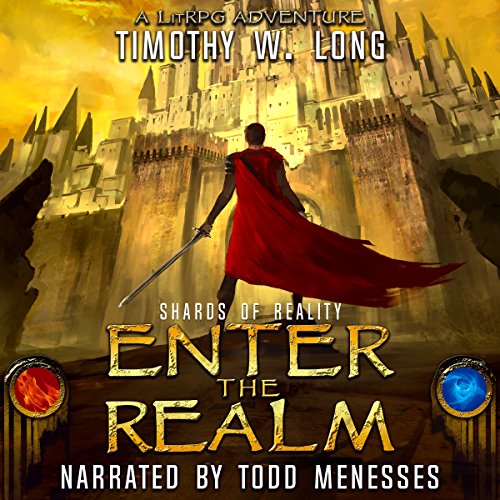 By: Timothy W. Long
Narrated by: Todd Menesses
Try for £0.00

Walt and Oz need to level up to survive and every moment is going to hurt.

Walter LePointe and Oswald Blackwell just woke up inside of the online role playing game Realms of Th'loria. With no memory of how they arrived, Walt and Oz soon learn the hard way that living in an epic fantasy world isn't all it's cracked up to be. As level one characters with no skills or experience, nothing can prepare them for their new lives as they prepare to enter the realm.

What listeners say about Shards of Reality

Ok, so I was a little unsure at the beginning and I thought the MC was a little whiney, but it really gets its teeth into you and I couldn’t put it down.
Great premise and written really well and it’s absolutely filled to the brim with adventures and fights, all done really well.
Narration perfectly suited the writers style and had great pacing and character voices (ok, so the Scottish could use a tiny bit of work!).
All in all, a great book and I was devastated to get to the end!
Definitely want to hear more! And the fact Timothy is possibly a Red Dwarf fan makes the book even better…! Lol
This is my honest opinion on a free review copy.

I received an ARC of this audio book. I loved it! Imagine playing your favorite video game. Now imagine reading your favorite book. This book combines the two so realistically that you feel yourself excited when the characters level up, and anxious when their HP goes down. Such great character and world building, that even non gamers should enjoy, especially if you like sarcastic banter and realistic monsters, and a mystery. It's all here with great narration as well. Love a good listen so I can work on a jigsaw puzzle at the same time.

Waking up in a game playing world

Shards of Reality, Enter the Realm, Book 1 is a LITRPG novel. For those of you not in the know that is a genre in which protagonists find themselves in a virtual reality, usually as players in the game, but sometimes there might be more nefarious or sad reason. For example, Viridian Gate Online has a player enter the game world to escape an asteroid that is going to destroy all life on earth. Reboot, has a player die, and his mind uploaded into the game. Here, the protagonist, Walt, wakes up in a popular MMORPG that he has played numerous times, with no memory of how he got there. Worse yet, he is in a newbie character, and not the one that he spent a lot of hours building up. Walt manages to find a few other people who are in the same predicament as him, players, but with no recollection of how they got there. The scary thing is they might not be able to leave.

The book starts out a little slowly, allowing you to take in everything at the same pace as the characters, and what I really liked is that this book is not bogged down by tons of stats like most LITRPG books. Yes, they grind, and level, and improve but their stats do not run by every five minutes like they do in some books. Let me tell you, that incessant listing of stats can be annoying. I enjoyed how they didn’t overwhelm the listener.

Another nice touch is that the characters all earn their skills and levels, there is no OP character seen here. Oz, for example, does whine and cry like most of us would at the exertion and pain he goes through to level. Walt can come across like a jerk sometimes, and I can see him being off-putting to some listeners. All I can say is that either you will get him, and his sense of humor or you will not, and if you don’t you won’t like him very much. That can be hard on a listener when you aren’t fond of the protagonist.

Another issue that some readers might take umbrage to is that the book ends on a cliffhanger. I know readers who absolutely flip out when they have that happen to them, but it is no big deal to me. I can handle a cliffhanger so long as I know there is more coming. I just put this out there because I know how readers can get.

The writing is smooth, the dialogue is snappy, and the plot really picks up once they hit their main quest. The characters do play out like real people and are not one-dimensional cutouts. If you cut them they will bleed, and then they will yell at you about cutting them. The narration is clean and crisp, and fun to listen to. Todd Menesses really pulls out all the stops, sets off some fireworks, and blows up the bells and whistles in the kitchen sink. He really helps to bring the story to life, and you will find no faults with his work.

One thing that bugged me is that I really liked the cover. It is beautiful and is the absolute picture of defiance. However, the main character is a mage. The cover shows a warrior. The mage carries a mace. The warrior has a sword. While the cover is beautiful and intriguing it literally has no relation to the pudgy wizard that packs a mace. I find it to be a little misleading. Not quite bait and switch, but close enough for government work.

The book is fun and enjoys nice pace once things are explained and the characters get rolling on their big quest. Like I say, I don’t mind a slow burn as long as there is pay off, and we get a pay off, and an excellent set up for the next book. Don’t miss out. Get in before there are 10 books in this series and you struggle to keep up with them!
Audiobook was provided for review by the author/narrator/publisher.

A good listen, well orated. A lot of funny parts.

This was an enjoyable book to listen to. Can't wait for the sequal. I could entirely relate to Walt point of view.

the main character was a whiny idiot who couldn't do anything right and constantly got in to trouble and not In a good way. the story was dull and not vary interesting. Todd menesses is a good narrator and I think he did a good job with the characters but I just couldn't get in to it .

I’d never heard of this genre before, and I couldn’t have picked a better book to start with. The characters were great the plot was excellent and as s gamer I thought the mechanics and they were explained was cool.

This is a well thought out story that has some nice humor and descent character development. I look forward to the second book in the series and seeing what happens next

It gets off to a slow start but is a really good lirpg novel. Buy it

Good start, middle, but no ending!

If you are a D&D or WOW type you will enjoy everything but the ending. Disappointing in the extreme. Ending is supposed to make you buy the next book because it isn’t ended. My way of thinking a book stands on its own or not at all. Comic books leave you hanging for the next one and even they have a partial ending. Sorry that this author had. To do things this way. Perhaps it was the Editor/publishers. Either way I dislike it.

The ending threw me for a loop!

I really got into this story even though the LitRPG genre is not really my thing, this one was really good. It had some great aspects to it and a great cliffhanger I didn't see coming. Felt like I was playing Skyrim during parts of it and I really cared what happened to the characters my favorite was the dwarf...who is not what he first appears to be. Check it out for yourself well worth the credit!

The first two chapters I was a little iffy I was thinking it was going to be something like a old school Dungeons & Dragons but realized very quickly that it it was so much more.
the only drawback of this book while listening to it it made me itch to reinstall Everquest 2 or Guild Wars 2 to play as I was enjoying the book.
This this book has made me itching for more I will stay tuned for the next chapters in the series and hope the Adventure Continues on.