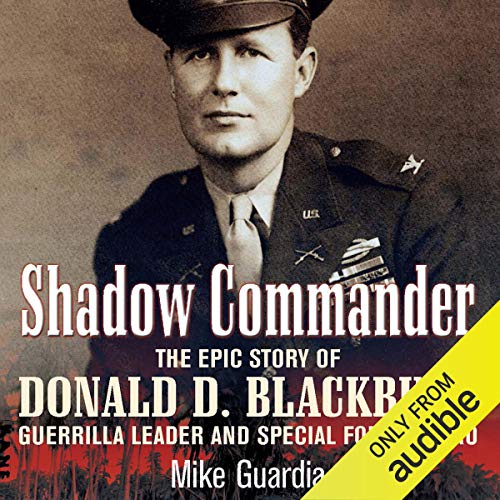 By: Mike Guardia
Narrated by: Jason Huggins
Try for £0.00

The fires on Bataan burned on the evening of April 9, 1942 - illuminating the white flags of surrender against the nighttime sky. Woefully outnumbered, outgunned, and ill-equipped, battered remnants of the American-Philippine army surrendered to the forces of the Rising Sun. Yet amongst the chaos and devastation of the American defeat, Army Captain Donald D. Blackburn refused to lay down his arms.

With future SF legend Russell Volckmann, Blackburn escaped from Bataan and fled to the mountainous jungles of North Luzon, where they raised a private army of over 22,000 men against the Japanese. Once there, Blackburn organized a guerrilla regiment from among the native tribes in the Cagayan Valley. "Blackburn's Headhunters," as they came to be known, devastated the Japanese 14th Army within the western provinces of North Luzon and destroyed the Japanese naval base at Aparri - the largest enemy anchorage in the Philippines.

After the war, Blackburn remained on active duty and played a key role in initiating Special Forces operations in Southeast Asia. In 1958, as commander of the 77th Special Forces Group, he spearheaded Operation White Star in Laos - the first major deployment of American Special Forces to a country with an active insurgency. Seven years later, Blackburn took command of the highly classified Studies and Observations Group (SOG), charged with performing secret missions now that main-force Communist incursions were on the rise.

In the wake of the CIA's disastrous Leaping Lena program, in 1964 Blackburn revitalized the Special Operations campaign in South Vietnam. Sending cross-border reconnaissance teams into Cambodia and North Vietnam, he discovered the clandestine networks and supply nodes of the infamous Ho Chi Minh Trail. Taking this information directly to General Westmoreland, Blackburn received authorization to conduct full-scale operations against the NVA and Viet Cong operating in Laos and Cambodia. In combats large and small, the Communists realized they had met a master of insurgent tactics - and he was on the US side.

Following his return to the United States, Blackburn was appointed "Special Assistant for Counterinsurgency and Special Activities," where he was the architect of the infamous Son Tay Prison Raid. Officially termed Operation Ivory Coast, the Son Tay raid was the largest POW rescue mission - and indeed, the largest Special Forces operation - of the Vietnam War.

During a period when United States troops in Southeast Asia faced guerrilla armies on every side, it has been little recognized today that America had a superb covert commander of its own, his guerrilla skills honed in resistance against Japan. This book follows Donald D. Blackburn through both his youthful days of desperate combat against an Empire, and through his days as a commander, imparting his lessons to the newly-realized ranks of America's own Special Forces.

What listeners say about Shadow Commander

A great tale of an unsung American hero and Special Forces legend.

This remarkable biography of Brigadier General Donald Blackburn was meticulously researched and aided by his thorough diary entries mad throughout his time in the Philippines during WWII.

It goes on to detail his extensive contributions to Special Forces training and operations during the Vietnam War, to included his involvement in Operation White Star in Laos and his tenure commanding MACV-SOG. His remarkable career ended with his planning of the Son Tay prison raid in 1971.

The narrator for this audiobook has a wonderful voice and does a wonderful job of narrating this story. The only fault I can find is with the mispronunciations of so many names of people, places, and things. This I blame on the production and editing team, for they should have had the foresight to have acquainted the narrator with the pronunciations beforehand. Failing that, they should have caught and corrected these errors. It is a shame, really, because everything else about the book and its performance was superb.

This book is excellent for career military but would be hard to follow for those with little or no experience into military life. The USA is safer today because of this man and all the things he did throughout his military life. His legacy lives on especially in the Special Forces community.

Narrator was OK. I wish they'd train narrators to pronounce Vietnamese cities correctly as well as proper slang and such for acronyms used during the time frame covered (i.e., Kontum, ARVN, etc., etc.,). In a broad brush sense, the book provided an acceptable high school overview of the the subjects' career and involvement in WWII and later SOG operations and organizational development.

Great story, you need to pay attention to follow it, but well worth the effort.

couldn't get past the narrator

This book was a big disappointment for me. The first part of the book, concerning Blackburn's actions in the Philippines, was pretty good. The second half was brief and just a cursory treatment of the rest of his career. It could have been much better.

Great Story About Guerilla Warfare and the US Army

Gen. Blackburn wasn't the only one who led guerillas in the Philippines in WWI but he was able to translate that experience into a model for the special Forces, making them the true force multiplier that they are today. The story flows well throughout. My only gripe is the mispronunciations that occurred more often than I would like. Otherwise the narrator did a pretty good job. This is an Audible 20 Review Sweepstakes Entry

I learned a lot gorilla fighting in this book

This is a very interesting Story, the life story of a courage's Man.Least: the constant mispronounced titles, place names, ie it should be Chu Lai, not Chu Lay.

What was one of the most memorable moments of Shadow Commander?

Blackburn's Homecoming and re-adjustment to Peace and Home.

A Reader who had familiarized himself with the proper/correct pronunciations of place >names and definitions, ie. the Army of South Vietnam was not pronounced A.R.V.N. but Arven, he spelled it every time.

Could you see Shadow Commander being made into a movie or a TV series? Who should the stars be?

It's frustrating and discouraging to find a Book with a great story being butchered by the Reader. How about giving some Readers an Audition and have the script reviewed by someone who is familiar with the local flavor and lingo.