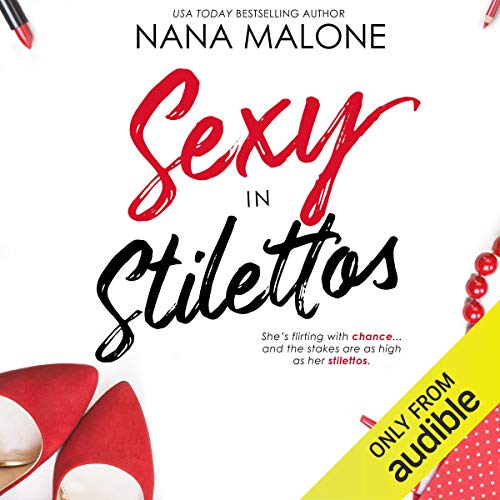 What's worse than having to watch your sister marry your ex-fiancé? How about when that fiancé fires you from the family business?

Hyper-organized, event planner, Jaya Trudeaux is used to doing things by the book and never making waves. It's a strategy that's served her well until she finds herself in failure alley with no fiancé, no job and her thirtieth birthday looming. Maybe it's time to change her methods. Starting with an unlikely date to the wedding from hell.

The only thing that can tie carefree, playboy, Alec Danthers down is his formidable step mother. When she calls him home to help find his wayward brother, he never imagines an uptight, list making, sass-talking woman would make him think about putting down roots.

What listeners say about Sexy in Stilettos

I could not even get past chapter 4 because this narrator is better suited for children's stories on the Disney channel. Her voice totally changes the dynamic of what is probably a decent storyline. Unfortunately, I will never know because I cannot listen to any more of this book or any other books that she has narrated. Thankfully it was included in the Romance package and I did not have to pay or use a credit for it.

What made the experience of listening to Sexy in Stilettos the most enjoyable?

What was one of the most memorable moments of Sexy in Stilettos?

When Adele told Jaya that the event was extraordinary.

Which character – as performed by Traci Odom – was your favorite?

I laughed in several spots. But Jaya kicked up a storm.

Jaya Trudeaux is a sassy, list making woman who tames a carefree globe trotter. She gets fired from the family business after her x-boyfriend tries to scoop her account. He is conniving and sleazy and turns around and gets engaged to her sister. Her father upholds her firing but does not explain to her why.
She meets Alec who has been called home to help locate his step brother by the only person who could get him to come home. His step mother. You will have to listen to the book to find out why she can make him do what no one else could. That is until he meets and falls head over heels in love with Jaya.
Will love conquer all and tame Alec and see Jaya set on a course to owning her own business rather than being under her fathers thumb? Does the sleaze bag get fired? Great story. Lots of sex though. Maybe too much for me but maybe not for you. There are some interesting positions described.
"This audiobook was provided by the author, narrator, or publisher at no cost in exchange for an unbiased review courtesy of Audiobook Blast."

Good story but should be listed under Erotica

The story was pretty good and kept me interested but because of the descriptive nature of the sexual encounters, this audiobook should probably be listed under the Erotica category.

The narrator did a pretty good job. I would like to listen to some more books she has done.

Alec is a wealthy man but he lets Jaya think he is a bartender. He is only supposed to be in town for a couple of weeks but he meets someone that makes him question his lifestyle.

Jaya is fired from her family company and is trying hard to find a new job but nobody is returning her emails or phone calls. Someone is trying to keep her from succeeding. Jaya gets involved with Alec. What was supposed to be a one night stand leads to much more than they both expected.

This audiobook was provided in exchange for my honest and unbiased opinion.

Would you try another book from Nana Malone and/or Traci Odom?

Yes, the book was good. Some of the terms was off putting because its not a realistic word used by normal people. "Hanky panky"

What other book might you compare Sexy in Stilettos to and why?

Typical romance book but more steamy than most.

The accents of some of the characters were very strange. The father was really out there.

Could you see Sexy in Stilettos being made into a movie or a TV series? Who should the stars be?

It would be an adult film if it was made into a movie. WAY to hot and steamy for a movie theater showing.

Really good read. Loved the story. predictable but the sex scenes were legit.

This was my first listen/story by this author, and I really enjoyed it. I would've liked for the narrator to sound more convincingly African-American (recognizing all Black people don't sound the same) to lend more authenticity to the telling. But, overall, the narrator still did a good job. But, in this instance, the narrator didn't carry the story; the story was good on it's own. And the narrator did it justice in large part. I really enjoyed the humor and heat most of all. It had small instances of explicit language, very very briefly. And the ending was a bit unconvincing, but I love love so.... I will look for this author again.

this was a really good book to listen to. thank you nana. please read and review your books.

The title does not lie

I liked (not love) but it was a good listen. Excellent performance by the reader. The only things that got annoying was that they said "Oh Shit" way too much and that the author never gave a good physical description of the characters so it was a little hard to picture what the characters looked like.

If you could sum up Sexy in Stilettos in three words, what would they be?

her voice was really good to listen to

Narrator should get an Oscar