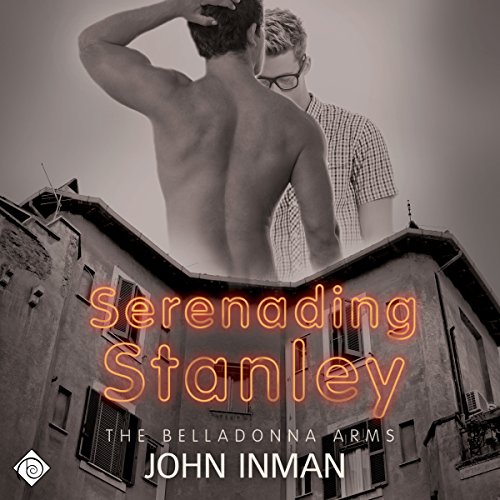 Welcome to the Belladonna Arms, a rundown little apartment building perched atop a hill in downtown San Diego, home to the city's lost and lovelorn. Shy archaeology student Stanley Sternbaum has just moved in and fills his time quietly observing his eccentric neighbors, avoiding his hellion mother, and trying his best to go unnoticed... which proves to be a problem when it comes to fellow tenant Roger Jane. Smitten, the hunky nurse with beautiful green eyes does everything in his power to woo Stanley, but Stanley has always lived a quiet life, too withdrawn from the world to take a chance on love. Especially with someone as beautiful as Roger Jane.

While Roger tries to batter down Stanley's defenses, Stanley turns to his new neighbors to learn about love: Ramon, who's not afraid to give his heart to the wrong man; Sylvia, the trans who just wants to be a woman, and the secret admirer who loves her just the way she is; Arthur, the aging drag queen who loves them all, expecting nothing in return - and Roger, who has been hurt once before but is still willing to risk his heart on Stanley, if Stanley will only look past his own insecurities and let him in.

Was it me? I don't know. I enjoyed all the characters but wasn't interested in Stanley. The narration was fine.

A little too much

This is a sweet, comfort read if you don't mind paranoid, insecure geek meets Greek god and just can't accept that he is worthy of attention. On the surface, I love the concept, but not so much in this execution. The best part of this book was the narrator, who is fabulous and really took what I thought was a mediocre story and brought it to a new level. He also took Arthur, a minor character, and stole the story with his interpretation of an overweight drag queen with a heart of gold. Stanley's insecurities became a bit much at about the 50% mark and Roger was just too good. So it was more like a Cinderfella fairy tale than any realistic read. It is fine for what it is.

What Sweet Music They Make...

Where does Serenading Stanley rank among all the audiobooks you’ve listened to so far?

What was one of the most memorable moments of Serenading Stanley?

When they saved Sylvia.

What does Tyler Stevens bring to the story that you wouldn’t experience if you just read the book?

I didn't hear Arthur's voice in my head, but Tyler's rendition is perfect. He does a wonderful job telling this story.

Many of Stanley's experiences mirrored my own. Not all of them good. They took me back to some very vulnerable times that I would not want to repeat. I certainly laughed out loud but teared up some, too.

John Inman has quickly become one of my favorite authors and I hope that his entire catalog of stories become available through Audible. With good narrators of course.

Would you consider the audio edition of Serenading Stanley to be better than the print version?

have not read it so can't answer

Roger and stanly is very interesting and the story of sylvia I wanted to know more and the relationship between her and pete needed more focus. I did find stanly's complaining a little to much after awhile and the fact that he just kept thinking roger was not serious, even naked he still had issue's

Have you listened to any of Tyler Stevens’s other performances before? How does this one compare?

I I have heard other stories he's performed he's one of the best reasons to listen to this.

Who was the most memorable character of Serenading Stanley and why?

Arthur :) however sylvia is a close 2nd

A bit OTT, but a lot of fun

Welcome to Belladonna Arms, home to the city’s lost and lovelorn and possibly the craziest bunch of people you'll meet in a long time.

Stanley's had enough. He wants to be his own man and not being controlled by his overbearing mother any longer. He's a graduate student at college for Christ’s sake. So said and done, he moves into Belladonna Arms, an apartment building in downtown San Diego. A building that houses a variety of colourful characters that you can't help but fall for. But fair warning, do watch out for the brownies hanging on your door, they might just contain a magical extra ingredient that makes you want to fly.

Inman writes some awesome mysteries that will leave you breathless (yes, I'm still reeling from Sunset Lake from three months ago), but he also writes books that are the total opposite. Books you can't take seriously, with ridiculous plots and OTT characters. But you know what? Sometimes that's exactly what you need. And You know this going in to these books. Serenading Stanley is no exception to that. It's not a masterpiece, and it's not a book will lose any sleep over from going over the plot again and again. But this was a book that should be read / listened to for pure entertainment. To meet and fall for some awesome characters. Possibly you'll thank your lucky stars for the "normal" neighbours you have - or it might you wish for other ones. Either way, it will keep you entertained.

Tyler Stevens was a good choice of narrator for this book. He fit all the different characters and their personalities; he made you see them in front of you. He made them real. I also believe his fits this kind of story perfectly. His voice is made for the younger characters, and the more humorous stories. He brought this book to life and it was easy to fall into the story and moving into Belladonna Arms right alongside Stanley.

Listening to Serenading Stanley was a really pleasant way to spend an afternoon. It was sweet, not too serious and I generally just had a great time these past few hours.

Fun, but ultimately as mentally nutritious as cotton candy

I enjoyed the book mostly. The characters were a bit stock. The protagonist (Stanley) is painfully shy and falls in love with a seemingly unapproachable hunk. The difficulties ensue, and the psychological dynamics are handled fairly well except the resolution is fairly saccharine and pat. The reader is very effective.

I was driving down the road, listening to the audio book, with happy tears streaming down my face. Darn you, John Inman! This was a musical comedy, just without the music. Quirky characters, wonderfully brought to life by Tyler Stevens. His voices were wonderful, and I loved each and every character, from Stanley to Sylvia. Whenever I read a John Inman, I always think "this one is my favorite". Well, this one definitely was! I think The Boys on the Mountain was his best book, but Serenading Stanley was my favorite, which I know makes no sense...

Stanley Sternbaum is a shy, very shy, grad student who is just now leaving the nest to study Anthropology in San Diego. He rents his first apartment ever at the somewhat dodgy Belladonna Arms, a place full of gays with only one “pesky” heterosexual in the bunch. He is immediately entranced by one of his neighbors, Roger Jane.

To Stanley, Roger epitomizes all things perfect and in fact, god-like, and therefore unattainable to a little, “nobody” like him. Even when it seems that Roger might be interested in him, he has a hard time believing, and is in fact doing what he can to avoid the man so as to avoid a broken heart.

Though he is avoiding Roger, he is not avoiding the rest of the wacky tenants, and though he wished he could, his mother. There’s ChiChi, the rent boy. Ramon, the beauty student. Charlie, the kleptomaniac. Sylvia, the transsexual. And we can’t forget Arthur, the super. Each of these characters go out of their way to bring Stanley out of his shell, and in fact spend quite a bit of time waxing poetic about Roger!

Though it is a tough road, it is very entertaining and Roger eventually manages to win over his “little mouse” and together they find their very HEA.

I can’t believe I missed this book when it first came out! I ended up reading this in preparation for the sequel, Work in Progress, and boy am I glad! John Inman is an excellent writer. He is funny, sweet, descriptive and his characters are sublime.

Stanley and Roger almost, almost!, take the back seat to the secondary characters in this book. Arthur is hysterical! He’s an obese drag queen forever having to haul himself up 6 flights of stairs and nearly passing out. He looks for love for all his tenants while quietly pining for his own unrequited love.

ChiChi and Ramon are two colorful neighbors who aren’t afraid to put in their two cents while in between entertaining “massage customers with special needs” (ChiChi) or practicing new hair techniques like pink hair dye for Stanley’s mother (Ramon). Charlie is a diagnosed klepto, off his meds and you can imagine the antics he gets up to.

Stanley’s mother is a foul-mouthed, chain-smoking, busy-body who only wants what’s best for her son but has a hard time showing it.

All in all they make for a hysterical crew of well-meaning friends who gently nudge Stanley into Roger’s arms and help him to see for himself that he is more than worthy of that kind of love.

I highly recommend this book and give it 5 of 5 stars.

Tyler Stevens is a favorite narrator of mine and I think this ties as the best I have heard from him. He did a fantastic job with all the many and varied characters of the Belladonna Arms. Arthur is appropriately swishy/queeny. Sylvia is sweet and delicate. Ramon and ChiChi both have a fantastic accent with “attitude” and Stanley’s mom is perfect in her smoke roughened way.

I really, really enjoyed his narration and hope he does the sequel as well.

A book for adults

Well the earnestness with which high school boys in love pursue their love interests... OK I tried but the short answer is no. There were no redeeming qualities.

Over the top. I feel guilty being mean about this book but it really was not good. The narration was annoying and the book just juvenile.

The book starts off on a promising foot. The narration is ok and the character are quirky and funny. Unfortunately about an hour in everything falls apart. The book is WAY over sentimental, predictable, pathetic, and propagates over-obsessive and over-controlling relationships. The ending might make up for it, but I didn't make it that far. Aside from he book pissing me off, which isn't enough reason to hate it, I thought the story was dull, poorly constructed, and flat. It was just really boring.

What did you love best about Serenading Stanley?

For a gay romance novel, this little tale is not devoid of charm. The oddball setting and the likability of the characters, combined with decent writing peppered with erotica plus an occasional sprinkling of true wit render it disarmingly appealing. I found myself rather touched.