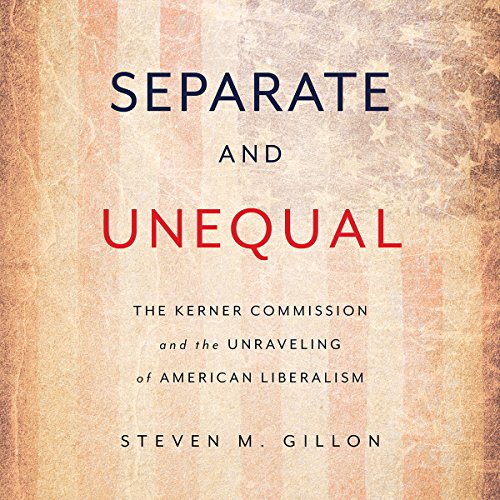 Convened by President Lyndon Johnson after riots in Newark and Detroit left dozens dead and thousands injured, the commission issued a report in 1968 that attributed the unrest to "white racism" and called for aggressive new programs to end discrimination and poverty. "Our nation is moving toward two societies," it warned, "one black, and one white - separate and unequal."

Johnson refused to accept the Kerner Report, and as his political coalition unraveled, its proposals went nowhere. For the right, the report became a symbol of liberal excess, and for the left, one of opportunities lost. Separate and Unequal is essential for anyone seeking to understand the fraught politics of race in America.

"In our toxic and dispiriting time, Separate and Unequal is an important reminder that social and racial progress is uneven and subject to setbacks like the one suffered after the release of the Kerner Report. But Steven Gillon's surprising story of dogged liberal politicians and journalists also shows that well-framed social arguments can change the debate forever." (Jonathan Alter, author of The Center Holds: Obama and His Enemies)

"Gillon's research about the Kerner Commission, bolstered by hours of interviews with the surviving members, is extremely well-documented and also offers the feel of being ripped from today's headlines....Well-rendered popular American history that also speaks to present-day issues." (Kirkus Reviews)

What listeners say about Separate and Unequal

Who produced this reading?

The book is OK and I wasn't expecting a "performance." I DID expect some attempt to correctly read the text and basic pronunciation! There are cringeworthy mis-readings and mis-pronunciations - how about the city in Vietnam Hue (should be pronounced whey) being pronounced as Hugh? There are dozens of these, making me wonder if anyone QC'ed the recording or pre-marked words on the narrator's script. Audible should be embarrassed to offer a recording as badly made as this one.

An important recounting of American history

I remember when the commission was formed and I followed its progress through the completion of the report. These were turbulent times. We were caught up between the war in Vietnam and the summer's of discontent in our cities. The issues surrounding the riots were never resolved. Although the Commission was never given the resources or time to complete its mission , it did generate a product that is still relevant.

I found this work yo be an excellent resource in providing an understanding on that time period. The writer does a good job of combining the paths of: the Idealist mood of the 60’s; the countermoves to that idealism; and the ways in which Vietnam cast a shadow over it all.
The book covers occurrences about 7 years before my birth. However, my youth in Cincinnati was spent in similar conditions.
Now, I know why.

This should be add to the history books

Way overdue this book need to be add to high school curriculum. Most powerful educational eye opening for all who read this book.