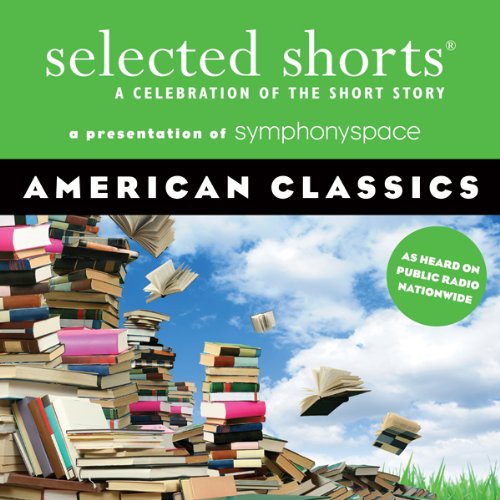 I am a very big fan of short stories and have listened to the Selected Shorts program for over 20 years. Any collection can be hit or miss, but this selection of american classics are all big hits. I liked every story and every reader. The stories range from funny to outrageous and touching to creepy. What more could one ask for?

Where does Selected Shorts: American Classics rank among all the audiobooks you’ve listened to so far?

One of the best Audible selections of the dozens in my library.

What other book might you compare Selected Shorts: American Classics to and why?

A unique experience. Inspired pairing of readers and texts.

Rene Auberjonois' masterful, remarkable delivery of an Edgar Allen Poe story is worth the purchase price on its own. In his hands, the minute joys of Poe's writing are presented to their best advantage. Stockard Channing's similarly spellbinding performance in a Eudora Welty selection will make you want to read everything (or re-read) Welty ever wrote--her mastery of Welty's prose is astounding.

I can't recommend this highly enough.

Would you listen to Selected Shorts: American Classics again? Why?

Yes, I'm pretty sure I'll return to it more than once.

This is worth buying for Stockard Channing's reading of 'Why I live at the PO' and Joyce Carol Oates' disturbing 'Where are you going, where have you been' read so well by Christine Baranksi. I loved Jerry Stiller's reading of At the Anarchist's Convention too. But really, the whole collection is outstanding and every reader is brilliant.

Dude seriously. Listening to these performances makes me feel like I’m going to be a better/more imaginative reader in the future. Big fan :)

Brilliant reading of Welty's Why I Live at the PO

Would you listen to Selected Shorts: American Classics again? Why?

I could listen to Stockard Channing's performance of Why I Live at the PO over and over again. It is wonderful. I enjoyed the other stories as well.

Such a fun and entertaining listen!

All of the stories were done with a live audience so the listening experience puts you in their presence too. All the readers/actors were fantastic. Stories were classics in every way.

What a great surprise! To hear these stories, most of which I had read before, performed by good actors before a live audience! I laughed--a lot. The stories really cam alive in a new way.

Have a listen . This is very enjoyable! Very funny

Sweet stories! Well worth the time. I find myself wanting to hear them all again.

If you could sum up Selected Shorts: American Classics in three words, what would they be?

What was one of the most memorable moments of Selected Shorts: American Classics?

All of them are impressive. The Amy Tan story grabbed me by the heart and drew me in, as she does.

Who was the most memorable character of Selected Shorts: American Classics and why?

Joyce Carol Oates' Where are You Going, Where Have You Been, came alive for me in some new ways despite the fact that I've probably read it ten times in various English classes and on my own.

All of these collections of Selected Shorts benefit greatly from being performed in front of live audiences. I've purchased several short story collections because I've heard a story from an author that was well-read and grabbed me. Thanks Audible!

Yes! An excellent variety of stories I would not have read otherwise.

Every story had an outstanding reader, even if the story was not my style, all stories were entertaining and thought provoking.