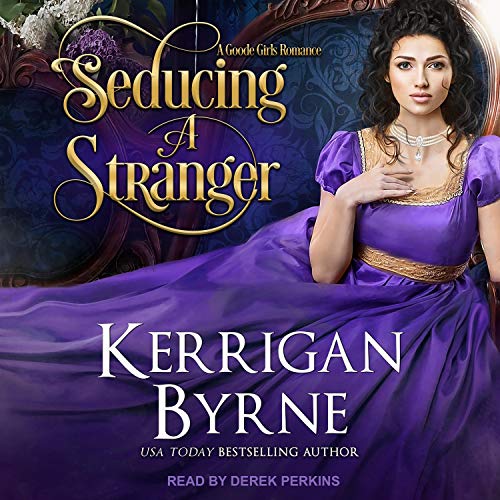 By: Kerrigan Byrne
Narrated by: Derek Perkins
Try for £0.00

Sir Carlton Morley is famously possessed of extraordinary will, singular focus, and a merciless sense of justice. As a man, he secured his fortune and his preeminence as Scotland Yard's ruthless chief inspector. As a decorated soldier, he was legend for his unflinching trigger finger, his precision in battle, and his imperturbable strength. But as a boy, he was someone else. A twin, a thief, and a murderer, until tragedy reshaped him.

Now he stalks the night, in search of redemption and retribution, vowing to never give into temptation, as it's just another form of weakness. Until temptation lands - quite literally - in his lap, taking the form of Prudence Goode. Prim and proper Pru is expected to live a life of drudgery, but before she succumbs to her fate, she craves just one night of desire.

On the night she searches for it, she stumbles upon a man made of shadows, muscle and wrath...and decides he is the one. When their firestorm of passion burns out of control, Morley discovers, too late, that he was right. The tempting woman has become his weakness. A weakness his enemies can use against him.

What listeners say about Seducing a Stranger

Not one of my favourites

I am pleased that Morley finds his love at last and it did make me laugh out loud how they met.

Thereafter the introspection went on for too long and became tedious. The story only became interesting again towards the end of the book.

Again, the narration was perfect!

brilliant last book of this series

Loved every second of this series. Unfortunately this is the last book of the series. And the first of The Goode series. But I want more of Dorian, Argent, Liam, Gavin, Cole, Ash and Morley. I can't get enough of all of them. My favourites are Dorian, Argent and Ash. But I love them all . More please. Derek Perkins was brilliant as always. Kerrigan and Derek make a great team.

I love the Victorian Rebels Series!!

If you have not yet read any of the other 6 books in this series you really should, to tie it & all the stories & characters together, but it's not necessary to enjoy this stand alone book.

First off I love Derek Perkins as the narrator, he helps to give the story & characters the grit that the author is portraying. All of these books are of dark characters that have been brought to see the light, the goodness in people that their pasts were mostly devoid of. My only complaint of the story is how short it was, I wish all of the books were a bit longer.

I definitely recommend this series to readers.

The last book in this series was just super good. From book one you come to know the chief inspector Carlton Morley, the H in this book. Sometimes I thought him a pain in the behind and an unfeeling brute. But gradually the author gave more and more glimpses of this enigmatic character. Finally in book 7 you get to know him and the love of his life, Prudence. So, so glad I bought the last book and so, so sad to say goodbye to this amazing series. Thank you Ms Byrne and Derek Perkins for giving me many hours of listening pleasure. Excellent job worth so much more than 5 stars! Lastly, the HOT love scenes (in all the books) will absolutely melt your heart ... and your panties.!

Kerrigan Byrne and Derek Perkins are a dynamic duo. I love them together and I hope they never part. I’ve just finished a love-story series that pales in comparison. This story starts off steamy and keeps you engaged. Definitely worth the coin!

4.5 stars! I thoroughly enjoyed this book! I have been waiting for Morley’s story since book one and was not disappointed. Morley is a man on a secret mission after hours and his first encounter with Pru is surprising and passionate. The two of them have amazing chemistry throughout the book. They meet again three months later under unusual and strained circumstances and crime solving ensues. I loved the development of the relationship between Morley and Pru and thought the two of them made for a good pairing. Derek Perkins was an excellent narrator and really brought the story and characters to life!

Although this book could be listened to as a standalone, I think it would be enjoyed more if the listener has read/listened to the previous books in the series. It was a lot of fun to catch up with some the characters from previous books and the banter among the guys was so much fun!

Generally a good Audible listen with a strong plot. I tolerated Derek Perkins as narrator. He did a fine job with the various male characters but the main female's voice grated on me throughout as I was always aware it was a male trying to do a higher pitched female voice. I could not get past this and minimized my liking of the character. Be aware there is quite a bit of steamy sexuality in this book doing nothing to add to the story of male protagonist solving a murder and interfering with drug smuggling ring. The H/h HEA had challenges and I was invested enough with H/h to want them to resolve their concerns.

Kerrigan Does It Again

I have enjoyed all of the books in this series and am looking forward to the next Goode Sisters book.

The whole series is nonstop action and intrigue

I am so impressed by your ability to write! I have listened to your entire series and I am blown away with the different characters and their backgrounds. We so often forget the imprisoned; their stories, their lives and the wickedness of prison; especially prison in earlier centuries. I have not read/listened to stories about prisoners before your series. Men who had to battle their way back to civilization, through hardships most would have given up on, with the families life gave them. Excellent, well done, well written.
And Derek, I don’t think anyone could bring those lives, those stories to life better than you have in your narration. You do all the voices, accents, and situations so well it is like being there. Exceptional narration, well done.

I really enjoyed this book. It stayed true to the dark and dangerous theme of all the precious books but with a slightly different twist. I love that precious hero’s and heroines continue to come to life book after book, so that you may fall in love with them all over again. Very good book.

Full of adventure and love, another wonderful book from this author! Five Stars! A must read!

Good story, could have been longer

I really feel you need to hear the story’s in order, this is not a stand alone book. It could have been longer. I would recommend this novella.