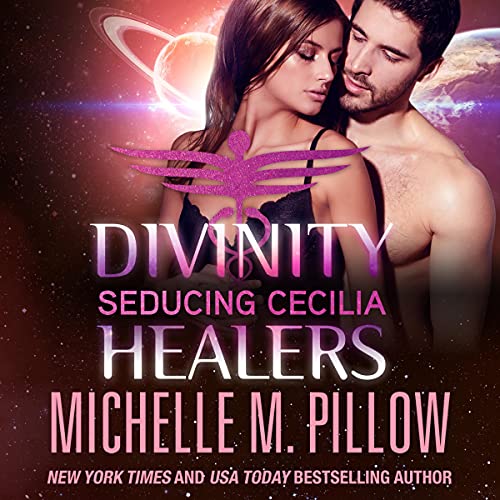 In a world obsessed with medical advancement, Dr. Gerard Fauchet longs for something more. When he’s assigned as the liaison to an off-plane dignitary, he never imagined she’d be so stunningly beautiful or so damned frustrating. One second she’s kissing him, the next she’s pretending nothing is between them. The passion is scorching, everything he ever dreamed of having with a woman. He’ll make her admit she wants him - or die trying.

Dr. Cecilia Markos is keenly aware that she’s been shoved through a portal to an alternate reality for one reason - to bring home medical advancements for the betterment of her people. Unfortunately, she only has two months to learn a world’s complete medical knowledge base. It’s an impossible task made even more so by the distractingly handsome Gerard, who she can’t seem to keep her hands or her mind off of.

What listeners say about Seducing Cecilia

Dr Gerard Fauchet, longs for something more, especially as he watches his best friend enjoying a new marriage with a beautiful wife. When he is paired with a visiting liaison Dr Cecilia Markos, sparks begin to fly. When chaos and order collides our get an unexpected love.
This is the middle of a series of three books. They don’t have to be listened to in order but it does help.

Passion and a Desire They Can’t Resist

Michelle M Pillow has created such a unique and wonderful world! A short novella which continued parts of the story started in “Ariella’s Keeper” (though the books can be read as stand alone). The sparks fly between Cecilia and Gerard but they are from different worlds and Cecilia will have to return home eventually! Can they live without each other? Passion, spontaneity and lots of sparks between these two! This was a joy to listen to! Looking forward to the next instalment - “Linnea’s Arrangement”!

This was a quick, fun read filled with well written characters that are endearing and a story line that will keep you engaged. The narrator did a fantastic job breathing life to this story and kept me listening.

I received an audiobook of this story and I am voluntarily leaving my honest review.

Seducing Cecilia is the second book in the series. Dr. Gerard Fauchet is jealous of his best friend, Sebastjan for finding love. Unfortunately, there isn't a woman that Gerard is interested in his world.

When Dr. Cecilia Markos came across dimension to obtain medical information, Gerard wondered if there was something there between Cecilia and him. After all, Cecilia was there for only two months.

When the Medical Supreme took ill, Cecilia has to chose of whether to stay in Gerard's sterile world or leave. As for Gerard, it was a choice of no-choice. The Medical Supreme will never allow Gerard to cross dimension since Gerard is a walking medical encyclopedia to any dimensional worlds. That knowledge cannot be freely passed on without working for it.

The narrator, Rebecca Cook did a good job. I'm still on the fence if she will be one of the narrators I would follow.

I was given this book by the author. I have decided to voluntary write an unbiased review for this book. I was not compensated or influenced in any way in writing this review.

This is book 2 in the series and is a stand alone book with a great HEA. The narrator does a great job of bring each character to life. I enjoyed this book and recommend it to all paranormal lovers. Looking forward to the next book in the series.

This is the second book in the Divinity Healers Series, an alternate reality romance, part of the Divinity Universe. This is an interesting second installment in the Series. Cecilia and Gerard are great characters. The storyline is entertaining, steamy, and fast-paced. The world building is intricate, and intriguing. Rebecca Cook did a great job with the narration. Looking forward to listening to Linnea's Arrangement, the next book in the Series.

Seducing Cecilia is the second book in the Divinity Healers series by Michelle M. Pillow.
This a fast paced, steamy and fun read. Set in an alternate reality, Cecilia comes from a world where any form of chaos is not tolerated! As a sort of exchange program, she travels to an alternate dimension in the hopes of bringing new medical advances back to her people. Great characters, fun quick story and great audio narration.
Looking forward to more!!

The second installment of the Divinity Healers series is a fast-pace and steamy read. Cecilia comes from another place where they are very strict and contracts must be drawn up prior to dating. Not so much in Gerard’s world. While Cecilia is working she must fight the temptation that come with Gerard and must concentrate on something that would help her planet. It was so much fun reading how they avoid each other but also have that wanting for each other. Steamy scenes, and the plot was great. It’s such a fast read. The narrator did a wonderful job keeping me enthralled.

Alternate realities are a thing in these books and Cecilia is freaking out when she’s asked to travel to one for research. She’s pretty sure she’s ready for the challenge but what she isn’t ready for is the animal attraction to one Dr. Fauchet and no laws to stop her from acting on those feelings. A fun love story about cross signals and different worlds that seem impossible to make work. This is a beach read with a lot of heat and a story line that will
Keep you entertained. The narrator was okay to listen to.

I really enjoy these well written stories by Michelle. This series about worlds from the other side of the portal are intriguing, with strong women and hunky men, the need for love and acceptance are the same worlds over. It is easy to be a part of her stories and become a community member. Feel good, happy stories that leave me wanting the next installment. I have both the ebook and the Audible book. Recommended.Sexual content.

Michelle M Pillow's imagination knows no bounds and me as a listener am very thankful for that. Not to mention that Rebecca Cook is one of my favorite narrators.

This is the 2nd audiobook in the Divinity Healers trilogy Seducing Cecilia. The timeline for this audiobook is 1/2 to 3/4 into the first audiobook Ariella's Keeper.

Dr. Cecilia from the New Order Society reality & Dr. Gerard from the "sterilized medical" reality (I have no idea how to spell the reality name. Sorry.) are the stars in this story.

First off, the New Order Society sounds horrible. You need written consent between to people for everything....even before you can do something so simple as giving someone a kiss. I don't even think you can hold hands. Plus, as children they are tattooed with a number on their foot and microchiped. The microchip isn't just for location tracking, it tracks Every aspect of their lives, even as adults. The only exception is Cecilia's assistant during the medical research mission. Her body chemistry shorts out the microchips. As such she breaks the rules/laws multiple times. I won't tell you which ones so you have to listen to find out but it's a doozie.

Dr. Gerard is to be the guide for Dr. Cecilia and her assistant but he isn't too thrilled at the prospect but he knows to be professional. That is until he sees Dr. Cecilia for the first time. He was totally and completely awestruck and his professionalism doesn't last long. In fact, it only lasts until he gets her alone outside the hospital. He's a fast mover. Cecilia being where she's from is so rigid and use to consent forms and "anti-chaos" that she eventually slaps him. She is attracted to him she just doesn't know about his reality rules & hers are so ingrained in her. That all changes for Cecilia about halfway through the transport ride when she wakes too early. She panics a bit and forces Gerard awake. This causes him to grumble about the remaining 2 hour ride. Really?? Yep, 2 hours. What a grump right? Well, Cecilia does a great job of taking his mind off of the remaining ride. (wink wink). She actually said it must have been his pheromones, hurting his feelings a bit, and wants them to be only professional when they arrive at the research center. When Gerard honors her wishes, her feelings get hurt and she kinda acts like a brat. I literally wanted to smack the back of her head.

Once at the research center, Cecilia is very surprised to find that nature is completely blocked out by walls and a dome. The researchers even wear bio hazard suits when outside the wall to collect specimens from the forest. Talk about overkill. This reality is almost as constricting as the New Order Society reality. Cecilia and her assistant are suppose to be there for 2 months to find a new medical advancement for her reality however, it seems they speak the same language but don't write the same language. This causes the process to go very slowly to only find out she found the cure for........(it's too funny to spoil. Listen to the audiobook to find out.) At the end of the first month we find out that Cecilia hasn't even left the 3 places in the center she was shown on the 1st day. The place is huge but she just didn't know if she was allowed to explore and experience her environment. That reality of hers really did a number on her. Fun fact: Cecilia did loosen up around Gerard and in private, they didn't stay professional very long. 😉
But she still can't wait to get home back to her regular life.

In enters the "Medical Supreme," and his mystery illness which is unheard of in the medical reality. Due to this he mandates that the portal be closed indefinitely. The New Order Society anti-chaos mindset are not having that and demands the women return in 2 weeks. This unfortunately turns into a political tug of war with the women and ends up having an effect.....(I won't say but it does end in a happy tearful twist!)

Oh, and I want a transport so bad. I mean type in coordinates get spritzed with sleeping gas and wake up at your destination. Who wouldn't want one.

This is a wonderful sequel to Ariella's Keeper with another interesting reality. This is definitely 10 star worthy. I highly recommend this audiobook so.....you are advised to buy with one click right away.