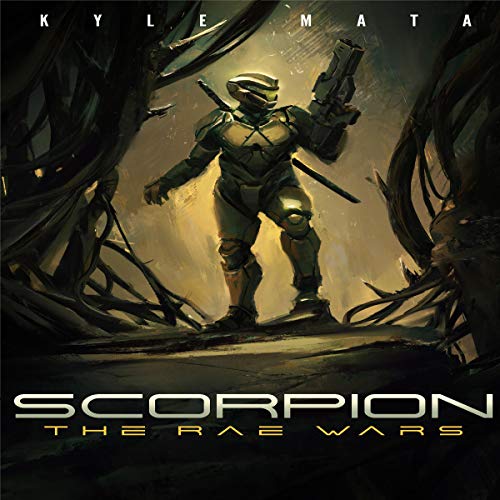 A science-fiction epic like you've never heard! This enhanced audiobook at its finest provides a completely immersive experience.

Nearly 1,000 years after humanity has left Earth and taken to the stars, a rift has opened in the center of the galaxy. The rift has been teleporting new planets, known as Nomen, into the solar systems. A period of tense peace begins between formerly warring factions, as a galactic land grab begins to claim and colonize these Nomen.

But the mysterious Nomen carry a dark secret within them, a secret that could lead to the end of humanity. This secret is stumbled upon by four unlikely heroes, each from a faction that hates the other.

Can these four overcome their differences and unite a war-torn humanity against this new threat?

loved everything about this audiobook! Enhanced audio got me hooked and I never want to go back!

Scorpion: The Rae Wars is a listen-worthy space romp with colorful characters (and species) and a plot that entertains. The author’s writing style could use some tightening up, but the universe he creates outweighs any criticism. This is my first experience with an “enhanced audiobook” and I’m definitely hooked. The sound effects and voice distortions add a new level of enjoyment. What impresses me most is the narrator’s talent with creating believable and character voices. Kudos to him and the producer for a job well done! I’ll be looking for more audio books by this narrator.

Some work is needed but it was enjoyable.

Disclaimer: I received a free copy from the publisher or writer via facebook.

TLDR: Needs some work but a fair start for a new writer. Fun cast of characters that is unfortunately brought down a peg by the narrator.

For this writers first foray into scifi I feel he is on the right track but he needs to tighten up his writing skill and style a bit. The first half of the book just felt all over the place and it wasn't until the second half that I felt like he hit his mark. For a original story and setting I did find it pretty interesting and with some more time to cook I think this series could shape up to be pretty enjoyable.

I personally am not a big fan of the narrator. His style and quality was all over the place. During some chapters his performance was really well done and on others it felt like he was struggling while reading the script.

If you are up for a fresh scifi story that is far from perfect but has it's merits then it is worth a listen. Just go into it with the ability to enjoy both the poor and really good sections. I will purchase the sequel if it is released.