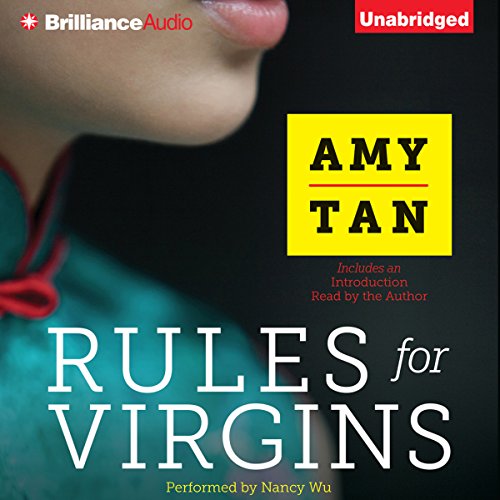 Enter veteran seducer, Magic Gourd, formerly one of Shanghai’s “Top Ten Beauties” and now the advisor and attendant of Violet, an aspiring but inexperienced courtesan. Violet may have the youth and the allure, but Magic Gourd has the cunning and the knowledge without which the younger woman is sure to fail. These ancient tricks of the trade aren’t written down, though; to pass them on to her student, Magic Gourd must reach back into her own professional past, bringing her lessons alive with stories and anecdotes from a career spent charming and manipulating men who should have known better but rarely did.

The world of sexual intrigue that Tan reveals in Rules for Virgins actually existed once, and she spares no detail in recreating it. But this story is more than intriguing (and sometimes shocking) historical literary fiction. Besides inviting us inside a life that few writers but Tan could conjure up, the intimate confessions of Magic Gourd add up to a kind of military manual for the War of the Sexes’ female combatants. The wisdom conveyed is ancient, specific, and timeless, exposing the workings of vanity and folly, calculation and desire that define the mysterious human heart.

Loved it - oh so briefly!

I've got to agree with other reviewers that this story was too short. I thoroughly enjoyed it, but it was just an appetizer. Now that my appetite has been whetted, I want more! Dear Amy Tan, are you listening? I'm feeling kind of teased, but maybe that was the point, it's part of the courtesan's repertoire?

Short as it is, I do recommend this tasty morsel.

Where was my Magic Gourd?

If you could sum up Rules for Virgins in three words, what would they be?

I felt as if I was Violet listening to a wise mentor, envisioning myself as a courtesan.

This book is short about 2 hrs, my biggest problem was it was hard to work and listen to since it was very detailed.

I wish it was longer!

It was so beautifully writen that I was constantly rewinding to hear certain passages over an over. I wish it was so much longer then it is. I love the tools and tricks of a courtesan that Amy Tan wrote about. she never disappoints me.

This actually put me to sleep. It's the teacher talking to the newbie and it just goes on and on, never bringing the character to life. This would be more engaging had Tan told the story from the young woman's viewpoint. How did she feel about the prospect of sexual servitude to the highest bidder? It's so appalling, I'd really like to know. Good stories are about human emotions.
I'd have stayed awake for that.

Excellent story, surprisingly great advice on how to succeed as a woman in a male dominated culture.

Excellent story, when needs must, this is timeless advice from a seasoned older woman to her young (virginal) protégée on how to both enrapture their clients and avoid the pitfalls of their profession. I loved the dichotomy of the seemingly powerless woman actually being the alpha in the relationships from begging to end. I would recommend this to other women and a few male friends. It's certainly a credit to the author that she brought the story of her own Grandmother and her interest in her family history to light. Knowing her research motivations made me even more engaged. Now that I've been introduced to them, in this delightful short story, I'm really looking forward to reading the full novel Amy Tan wrote about these characters.

Not up to par with her other books

This was a disappointment compared to her other books. I would not recommend it.

A near identical treatise can be found in "Valley of Amazement". This read discusses the sexual aspect of man woman intimacy. Amy Tan has the courage to present what others only hint at, and she does so with class, style, and a command of the English language.