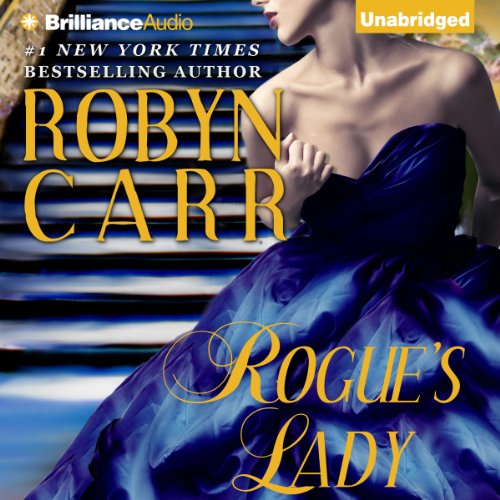 Born to a respected family, seventeen-year-old English beauty Vieve Donnelle always gets what she wants. But when word arrives that her father’s estate isn’t as wealthy as it appears, the noble heiress must rethink her betrothal to an impoverished aristocrat.

Enter Captain Tyson Gervais, an infuriating colonial sea captain traveling to England for business in foreign trade. Despite high tensions between England and the colonies, Vieve can’t resist thinking about the dashing American merchant who elicits such conflicting reactions from her - making her feel both the sensual temptress and the childish fool in the same moment. Tyson never imagined he’d be dallying with a spoiled noble, but Vieve’s young, tempting curves seduce him against his better judgment. Though he knows a designing woman can wreak havoc, he aches for the chance to claim one as his own.

Spanning two countries in the Georgian era, Rogue's Lady is a sexy tale of forbidden love that fans of romance will devour. Robyn Carr is the #1 New York Times best-selling author of the Virgin River novels and the Thunder Point series.

What listeners say about Rogue's Lady

What disappointed you about Rogue's Lady?

This book drove me crazy, and not in a good way. Tyson is an ass, Vieve is an adolescent, and the storyline is, I think, disjointed. The entire first third to half is about Vieve and Tyson. The last halfish, is the plot about Vieve's uncle. Its almost like 2 books. They don't really overlap a whole lot. Once the "happy couple" falls in love, that's the end of the romance part of the book, but you're only halfway through it. The second half of the book is Tyson trying to resolve Vieve's family situation. No real romance. No evolution of the couple, etc.

What could Robyn Carr have done to make this a more enjoyable book for you?

I think Justine has a rather monotone voice. She did do the accents well however.

What character would you cut from Rogue's Lady?

I dont know. They all were ok characters.

I don't understand so much about why this books was given such high reviews to begin with. Tyson all but raped Vieve, and accused her of terrible things repeatedly. I don't find that sexy or fun at all.

Not a very engaging storyline

Disappointing to see that it took more than half of the book to see only minimal hero and heroin interactions. Not certain why this is considered a historical romance when the story had more to do with everything except the romance. The passion was poor and only focused on the hero’s quick satisfaction not to mention that he played the victim almost all the way through. I was not impressed.

I've not read a poor Robyn Carr book -- until now! Perhaps I overstate, but I have enjoyed so many of Ms. Carr's books, I find it difficult to believe that she wrote such a weak story. Additionally, Justine Eyre's voice dripped with drama and seduction from start to finish. It was all together TOO MUCH!

The story is set in the late Georgian period, after the American Independence War. However, there is very little real historical content. The author also demonstrates an absolute lack of understanding of primogeniture and British inheritance laws. The baron has a legitimate son and heir and he can’t disinherit him and name the half brother from his mother’s second marriage as heir. Also there was talk of the family estate being promised to the heroine which is impossible, unless it was not entailed. In the last pages or so, the author tried to explain the whole shaky premise by making some comment that the title came through the mother. It seems like a last ditch attempt to justify the whole plot. If the inheritance did come through the female line, the author should have built on this more in the beginning. The whole thing just seems extremely dubious.

As far as the characters are concerned, they’re not particularly endearing : male MC is a stupid jerk and the female MC is a flighty doormat.

Justine Eyre is not my favorite narrator. She has a quavery voice which makes every one sound like they are on the verge of tears.

I've had this book for several months mainly because I'm a huge fan of Robyn Carr and everything she writes. But I've put off listening to it because there are SO MANY good books and never enough time. Now that I've taken the time to listen, I'm delighted that I did. Not only do I think the story was good but I'm truly mesmerized with Justine Eyre's skills!!! Her voices are extraordinary in every way. One would think that there are multi narrators instead of just one. I have my favorites but Justine Eyre just moved to the top of my list. I will be looking to find more of her narrations.

Not a good one

There was hardly any romance in this book.
I liked the narrators normal voice, but I didn't like her character voices because they sounded like they were crying. I hated the voice for Lenor. She didn't sound like the sophisticated whore/loose woman she was described as.
Tyson was an ass. Vieve was alright but she just wasn't a strong character.
I have said before Robyn Carr is hit or miss....this was a miss in my opinion. The actual story could have been pretty good, but characters were not very likable so I had trouble getting into the story.
I would suggest passing this one by.

The story was good, but the reader is aweful. She always makes the women sound as if they are crying. It is unnerving.