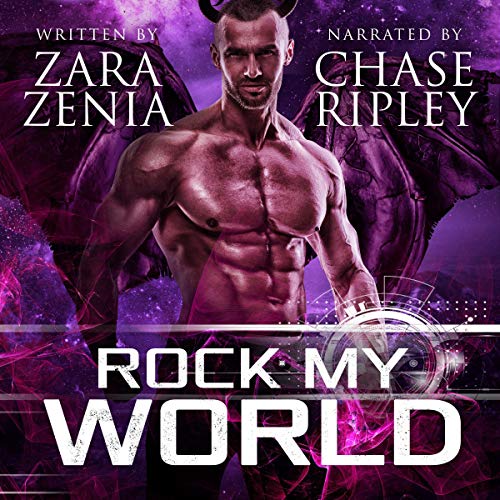 By: Zara Zenia
Narrated by: Chase Ripley
Try for £0.00

A stony guardian warrior. A woman obsessed with a mystery. A destined love that crosses worlds....

The gargoyles who fell to Earth have perched and secretly observed humans, but the Rose Syndicate’s threat to use garg technology to create super weapons means the gargs must act before humans pays the price.

Mogul has suffered for years, both at the hands of his fellow gargs and with the losses of the humans he has let into his heart. Never again. With the help of his only two friends, Mogul is determined to take down the Rose Syndicate and get off this planet. The last thing he needs is emotional entanglements, and his injured wings prevent him from injecting the mating serum even if he wanted to.

Kira is determined to unravel the mystery surrounding the objects found at the archeological dig near her childhood home. Science has always been her friend, something to keep her company during all the lonely nights when her father’s absence was felt so strongly. It sent her running to seek comfort with the stone gargoyles on the roof.

When Kira discovers Mogul’s beacon at the dig site and her father and the Rose Syndicate threaten, Mogul must swoop in to rescue the girl he’s watched grow into a beautiful woman. Fighting the threat against humanity, along with his growing attraction for Kira, is no easy task, but Mogul must do both to reach his ultimate goal - home.

Even if Kira is his mate, what can a damaged garg like Mogul offer? And with the ships from home only days away from rescuing the gargs from Earth, can Mogul take down the Rose Syndicate without losing his heart in the process?

What listeners say about Rock My World

It just couldn't suspend my disbelief

After all the other books, I just couldn't cope with Mogul and his chums. They are supposedly the alien equivalent to highly trained special ops soldiers and yet, they bungle everything. Given that they've been running surveillance on the Rose Syndicate for decades, they seen to think this is a Acme cartoon.

I overlooked the surgery by YouTube that saved her life. I overlooked Mogul knowing the sigils can be tracked and knowing that sigils can be turned off to avoid tracking yet our hero doesn't make use of this knowledge until after they are confronted by Syndicate goons. I overlooked the way this highly trained soldier dropped the syringe then couldn't jab it into the guard they subdue during infiltration. I overlooked their decision to drug the guards by injection even though they were going to blow the factory to smithereens, which would kill the guards anyway. I also ignored them being able to get anywhere near a Rose Syndicate building with an active sigil and not encounter a welcoming party. I even ignored that a Syndicate guard held a knife to a gargoyle's throat and instead of turning his neck to stone, our hero is afraid? Child please!

I finally had enough when his buddies decided to forget the plan to drive away before detonating their oh-so-powerful bombs and instead detonate all 3 while their buddy is standing right next to the building, I rolled my eyes so hard I might have caused some damage.

This book has the same worlds, species and organisations but after that it's like a completely different universe. Hell, the Kargals even refer to themselves as Gargoyles and talk about Garg technology? I really hope this isn't the last book because it would end a good series on a whimper rather than a bang.

I got this story via audiobook boom and this is my voluntary review. I loved this story from the beginning. A little girl sits on the roof and talks to gargoyles, not knowing that they actually hear her. One of them is special to her and when she grows up and is caught in evil perpetrated by her father is saved by this gargoyle. The story gets better as it goes along. The ending is nice and the world-building good. I like it that humor is sprinkled in with the suspense. This is another example of how inhumane some humans can be. Good story overall. It was also a stand-alone that was part of a group of stories. I didn't listen to any of the others yet was able to follow this story to its conclusion.

This was a pretty good book about gargoyles/aliens. I will check out the rest of the series. Chase Ripley did a very good job with the narration. I received this free copy audiobook at my request and have voluntarily left this review.

A young girl, her mother dead, her father absent, speaks to the stone gargoyles on the roof of their home...only they aren’t stone, but trapped aliens.
The young girl, Kira, grows up to be an archeologist and upon finding an alien object, attacked by people who work for her father, that Mogul the gargoyle who cared for her.
A story of impossible love, fighting for survival and loyalty.
The narrator did a nice job and paced the story telling.

I feel like I debated through this book on if I should finish it or not. I did. I enjoyed it. This book just won't be something I listen to again.