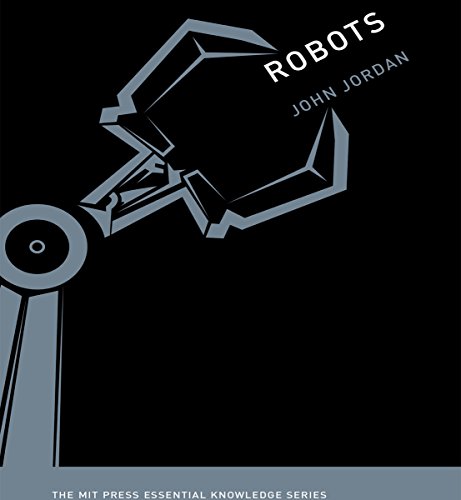 Robots are entering the mainstream. Technologies have advanced to the point of mass commercialization - Roomba, for example - and adoption by governments - most notably, their use of drones. Meanwhile, these devices are being received by a public whose main sources of information about robots are the fantasies of popular culture. We know a lot about C-3PO and Robocop, but not much about Atlas, Motoman, Kiva, or Beam - real-life robots that are reinventing warfare, the industrial workplace, and collaboration. In this book, technology analyst John Jordan offers an accessible and engaging introduction to robots and robotics, covering state-of-the-art applications, economic implications, and cultural context.

Jordan chronicles the prehistory of robots and the treatment of robots in science fiction, movies, and television - from the outsized influence of Mary Shelley's Frankenstein to Isaac Asimov's I, Robot (in which Asimov coined the term "robotics"). He offers a guided tour of robotics today, describing the components of robots, the complicating factors that make robotics so challenging, and such applications as driverless cars, unmanned warfare, and robots on the assembly line.

Roboticists draw on such technical fields as power management, materials science, and artificial intelligence. Jordan points out, however, that robotics design decisions also embody such nontechnical elements as value judgments, professional aspirations, and ethical assumptions, and raise questions that involve law, belief, economics, education, public safety, and human identity. Robots will be neither our slaves nor our overlords; instead, they are rapidly becoming our close companions, working in partnership with us - whether in a factory, on a highway, or as a prosthetic device. Given these profound changes to human work and life, Jordan argues that robotics is too important to be left solely to roboticists.

What listeners say about Robots

This book does a great job of being concise, comprehensive and balanced. Very well written, not alarmist but full of surprises. I found the sections on autonomous vehicles, military robots and Japanese robotics particularly interesting, but the whole thing is excellent. It's very well well read too.

A broad description of the state of the art

It was a broad but not deep description of the state of the art in robotics discipline.

ok, but really beats around the bush

The author includes some interesting tid bits, but the work lacks a concentrated focus and thesis. It's comparison of the F-22 and the predator distorted the truth and misses the point.

Good book to cover the broad topic, go ahead nerd out.

Although some of the quotations from real people in the real world are quoted in a kevin bacon seven degree perspective is super annoying.

Its like hearing a psa from the 50s misses the context & point. Workers ,solider and engineers dont actually believe the robot is alive. These are the things you do when your on the line or the floor or the lab to keep things fun and moving.

Other than that 4 stars for its broad overview.