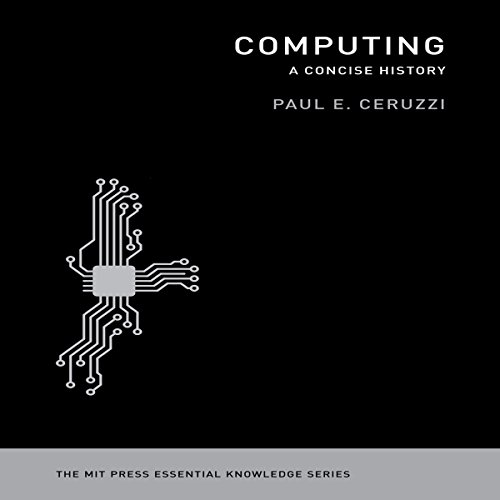 The history of computing could be told as the story of hardware and software or the story of the Internet or the story of "smart" handheld devices, with subplots involving IBM, Microsoft, Apple, Facebook, and Twitter. In this concise and accessible account of the invention and development of digital technology, computer historian Paul Ceruzzi offers a broader and more useful perspective. He identifies four major threads that run throughout all of computing's technological development: digitization - the coding of information, computation, and control in binary form, ones and zeros; the convergence of multiple streams of techniques, devices, and machines, yielding more than the sum of their parts; the steady advance of electronic technology, as characterized famously by "Moore's Law"; and the human-machine interface.

Ceruzzi guides us through computing history, telling how a Bell Labs mathematician coined the word digital in 1942 (to describe a high-speed method of calculating used in antiaircraft devices) and recounting the development of the punch card (for use in the 1890 US Census). He describes the ENIAC, built for scientific and military applications; the UNIVAC, the first general purpose computer; and ARPANET, the Internet's precursor. Ceruzzi's account traces the world-changing evolution of the computer from a room-size ensemble of machinery to a "minicomputer" to a desktop computer to a pocket-sized smartphone. He describes the development of the silicon chip, which could store ever-increasing amounts of data and enabled ever-decreasing device size. He visits that hotbed of innovation, Silicon Valley, and brings the story up to the present with the Internet, the World Wide Web, and social networking.

What listeners say about Computing: A Concise History

Delivers what it promises

The book provides a very descriptive and concise information about the history of computing and its various stages.
Very informative considering computing's detailed history with its rapid growth

A little too concise for me...

If you know a little about the history of computing already you won't get much from the book, I wish the author would have dropped the chapter on more recent developments in favour of beefing up some of the others. If you're new to all this though, it's a good summary.

Let down by poor narration.

The book is a little too concise for my taste. But the main problem is the consistent mispronunciation by the narrator of various names and terms, including, at one point two references within a couple of minutes of each other to "geranium transistors".

loved this. a must listen for all new computer science students. sets your mind up to grasp the how and why and who of the path of development of the digital revolution.