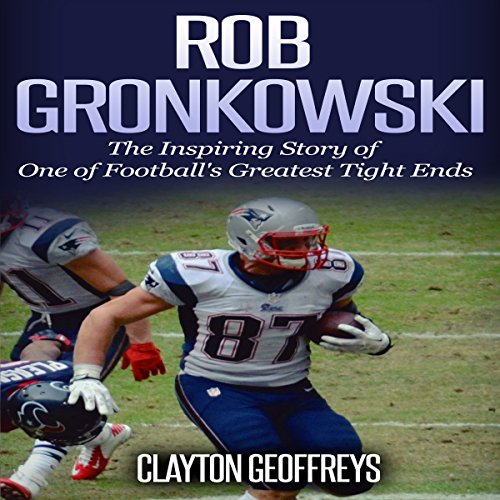 The Inspiring Story of One of Football's Greatest Tight Ends
By: Clayton Geoffreys
Narrated by: R. Paul Matty
Length: 3 hrs and 32 mins
Categories: Biographies & Memoirs, Celebrities
2 out of 5 stars 2.0 (1 rating)

In Rob Gronkowski: The Inspiring Story of One of Football's Greatest Tight Ends, you will learn the inspirational story of one of football's premier tight ends, Rob Gronkowski. Often known simply as "Gronk", Gronkowski has left a lasting mark on the New England Patriots franchise since joining the league in 2010. He was the first tight end in league history to lead the league in receiving touchdowns.

The Brady and Gronkowski duo on offense has been a potent combination whenever the Patriots have needed to find a way to score quickly down the stretch of football games. A charismatic figure, Gronkowski has the adoration of fans beyond just Patriots fans as a player who does not take himself too seriously and is not afraid to have fun while winning. In this book, we'll learn more about Gronk's journey into the league, as well as what makes him such a great player.

Here is a preview of what is inside this book:

I understand enthusiasm, but the narrator on this title just goes way over the top.