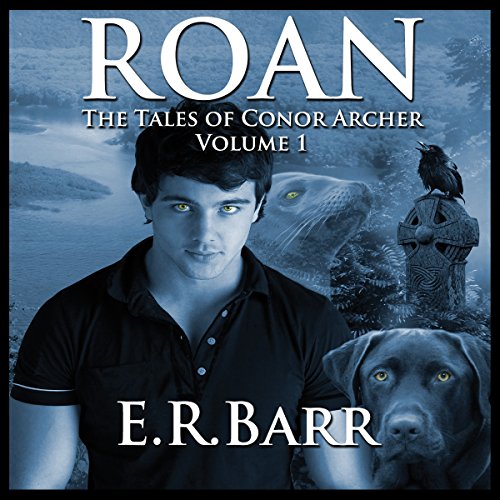 What would you do if you were playing in a pick-up Celtic band at an Irish pub in downtown Chicago and a biker man yanks you outside, bites you, says "Welcome to the family", and then disappears into the Chicago River? If you are Conor Archer, you would be in pain, wondering what just happened, and then remembering that your mom is dying and you need to get home fast. He arrives in enough time to hold his dying mother. But she has time to tell him that he must go to Tinker's Grove, the hometown he has never seen. It is an old Irish immigrant town from the 19th century, by the banks of the Wisconsin River. Going there is the only way he can be healed.

He collapses when he arrives in the center of the town, seriously ill. He wakes up to Troubles, a chocolate Labrador, licking his face and a bunch of people standing around him who soon will be his friends. They want to take him down by the river where there is a Native American burial mound. They say he can be healed there. And that's when Conor realizes he is in a strange town with many mysteries and some really strange people.

Tinker's Grove holds secrets. There are the "dark ones", some of the children of the town, who have the powers of the wild animals of the forest. People talk of the river demon Piasa, a water wraith corrupting everything it touches. And they speak of someone or something that dwells in the Indian burial mound. He or it is mysterious and powerful, an immigrant like them from the Celtic lands beyond the sea, but the town knows that presence to be good, holding off that creeping evil. The people seem to think that Conor Archer is some savior in a coming battle between good and evil.

What listeners say about Roan

Where does Roan rank among all the audiobooks you’ve listened to so far?

Roan is as good as it gets when it comes to other audiobooks. I really enjoyed the added suspenseful intro to each chapter.

What was one of the most memorable moments of Roan?

I'm a sucker for both fantasy and love stories, one of the most memorable moments of Roan was when Conor and Beth fell in love. I also really enjoyed the description of Conor completing his transformation, so exciting! But one of my favorites was the description of areas in Chicago, Northern Illinois, and parts of Wisconsin. Because I am from Chicago and now living in the Wisconsin/Illinois Stateline, I totally recognized the authors descriptions in the novel. Talk about a visual. It was so cool!

What does Alan Ross bring to the story that you wouldn’t experience if you just read the book?

I have read Roan twice, but I love how Alan Ross put music and depth into the songs in Roan. I'm not familiar with Irish folklore but Ross was able to make the book come more alive for me in a way reading could not. I'm just waiting for a movie of this book.

Just waiting for Conor Archer's next adventure. I know there is more to come. Let's go E.R. Barr!

Would you try another book from E.R. Barr and/or Alan Ross?

No. All I was hoping for was the end.

the characters are dumb. Just walking up and knocking on the door is not a plan. They do this over and over again. The good guys just want to talk it out.... You won't start the story until your 22 min in. This wants to be a good story but it just falls short. If they cut 1/2 of it out and if the characters have just a little common sense it could be good, but it is not.