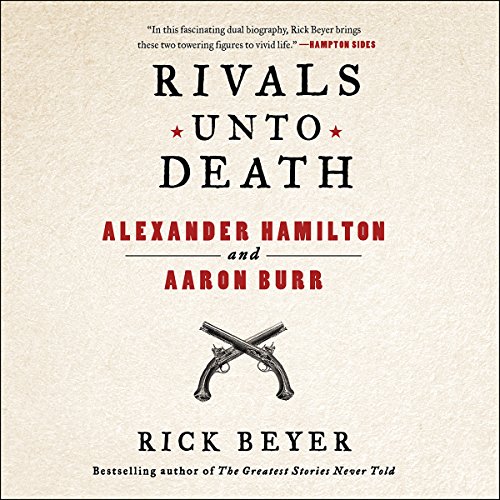 From the best-selling author of The Greatest Stories Never Told series, the epic history of Alexander Hamilton and Aaron Burr's illustrious and eccentric political careers and their fateful rivalry.

The day was hot and sticky. The man in the rowboat was an impetuous hothead. His row across the choppy Hudson that morning led to a confrontation that has burned bright in the American mind for more than 200 years.

When the most notorious duel in American history took place, Alexander Hamilton was 49, a former Treasury Secretary whose meteoric political rise had flamed out in the wake of a humiliating sex scandal. Vice President Aaron Burr, was just a year younger than Hamilton, at the top of a meteoric rise of his own in the nation's fledgling government.

Rivals unto Death explores the largely unknown three-decade dance that led to the infamous duel. It traces the rivalry back to the earliest days of the American Revolution, when both men, brilliant, restless, and barely 20 years old, elbowed their way onto the staff of General George Washington; follows them as they launch their competitive legal practices in New York City and through the insanity of the election of 1800 when Hamilton threw his support behind Thomas Jefferson in an effort to knock Burr out of the running for president; and takes them finally to the dueling grounds that only one would emerge from.

What listeners say about Rivals Unto Death

I really loved this book. I particularly liked how it’s set backwards, starting at chapter ten and counting down. I loved the writing style, and the way that this book is not as bias as some other joint biographies you can find. It truly felt like the author was trying to sit on a fence. It was simple, clear and straight forward. A very good joint biography.

There are a lot of errors in this book, such as Madison being at the Battle of Trenton. Do not trust the facts presented here.

Really a good story about the battle between burr and Hamilton

This is a great story about Hamilton and burr.
Never knew how it happened
Recommend it.