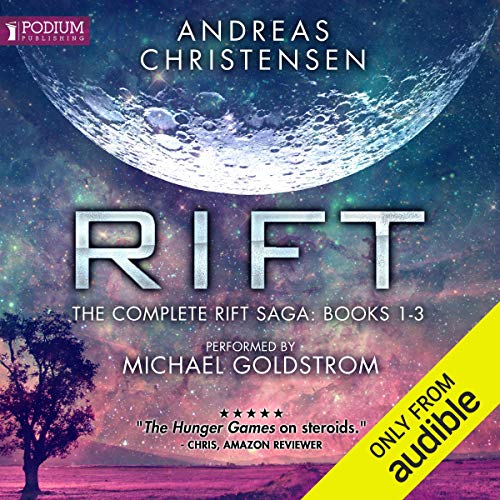 By: Andreas Christensen
Narrated by: Michael Goldstrom
Try for £0.00

From the ruins of what used to be North America, a new nation was forged by survivors of the Fall. They called this new nation the Covenant, and two centuries later it is stronger than ever. The Moon people, descendants of lunar colonists who returned to Earth to rebuild it, rule with an iron fist to ensure their dominance over the original inhabitants, the English. For the Covenant is a nation where a chosen few prosper at the cost of everyone else, and while the English are forced to serve their masters their entire lives, the Moon people have mastered the greatest secret, the secret of life itself.

In the Rift Saga, we follow Sue and Dave, two English teens sent off to serve; Evan, a soldier and a member of one of the most prominent families of the Moon people; and Mark, the oldest man on Earth as they find themselves in the midst of events, uncovering conspiracies that have kept the Moon people in power ever since they left their dusty refuge behind.

Sooner or later, in different ways, they will all find that lies and deception can work for only so long, and sooner or later the truth will be unveiled. What will happen once the veil of lies unravels?

The Rift Saga takes place more than two centuries after the events of Exodus in a dystopian society forged from the ashes of global disaster.

What listeners say about Rift

was disappointed with the ending. looks like he ran out of ideas. or is there a book 4 coming out.. ?

this series held my attention and was entertaining. the narrator was very good although I would have liked female narrator for the female roles.

The story starts 200 years after an event known as the Fall. Two nations foresaw the danger and migrated to the Moon. Years later, the next generation decided to come back to Earth and protect it from any other environmental disaster, using the few 'English' left to build their empire, creating new history and deleting the old one from the books and the memories of the survivors. The saying that 'History is written by the victors' cannot be more true than here. When reaching the age of eighteen, the English are 'enlisted' in one of the several jobs where they should serve for the next seven years and maybe gain the status of citizen. Many of them, the less lucky ones, will go to the Corpus, where they will be enslaved and most probably will not survive the seven years. Sue and Dave are two of this enlisted people, but to two different services. Each one on their part of the Covenant will discover that the Moon people have told them lies, but they will need to find the depth of them, and if it is even possible to discover the truth and act upon it.

The first thing that caught my eye was the word 'Rift' in the title of the book. I have a soft spot for the mentioned word in a science-fiction context. And I love dystopian novels, it is something I cannot resist. They usually present a society which, in principle, does not make a lot of sense, and we need to discover, along with the main characters, the truth behind it all. It is like solving a mystery in a way, in which the pieces finally fall into place. And The Rift Saga is one of these stories. It caught my attention from the start, with well-developed characters with real motivations in an upside down world. We slowly discover parts of the truth, but at the end of book one, there is a twist that gives a lot more depth to it, allowing for more development in books two and three, and opens the possibility to other books.

Something that I would have liked when listening to the story would be maps. I ignore if they are included in the eBook or paper editions, but I think it would have been a nice addition. I would just include one of the Covenant for the first book and a broader one for books two and three.

Michael Goldstrom did a superb job with the narration of this book, not only transmitting emotions but also giving distinctive voices and accents to the characters, and they were quite some. I liked that René's accent was very very subtle, contrary to the other French's. I really enjoyed the narration and the characters portraits by Goldstrom, and I think it was an added value to the book.

There is another series related to this one, 'Exodus', which I would love to listen too. I think Christensen has created a very interesting world, and his books are a must listen for any dystopian fan.

Fast paced and kept my attention

If you like books about future earth and the survival of people, with a lot of action and heroes, you will like this book. It is written on a young adult level and I really appreciated that it had no bad language or other inappropriate distractions. The story stood strong by itself and did not need those things to keep your interest or make shocking statements. I like books that I feel OK about my teenagers or young adults reading and know they’re not exposed to somebody’s overly dramatic language. Thank you to the author!

I loved it ! kept me entertained all the way.

Great story with well developed side stories. i do hope there is a 4th book.

This book could be the precursor to wool omnibus.

This book could be the precursor to the series called wool omnibus by Hugy Howey.

An enjoyable saga but was left wanting

Andreas Christensen is an excellent writer who craftily lays out character plot arcs with seemingly predictable expectations but then shifts their arcs in subtle ways so as to change their direction. After noticing this a couple of times, I found myself carefully paying more attention to each character's story rather than assume it would unfold in a knowing manner. Michael Goldstrom was an excellent narrator and had a well-defined dynamic range that made it easy to distinguish both the gender of the characters and their nationality.

I do have a few issues I found disappointing, though. Each of the two protagonists from Charlestown were foretold to accomplish great things but, in the end, while their contributions were valiant, I didn't think they were anything out of the ordinary as to what other people would have done under similar circumstances. There were other situations where some 2nd tier characters, like Dave's warden friend's fragile condition was left unresolved and a primary protagonist's ending seems rather rushed and uninteresting. Even the ending of the saga was a bit of a letdown,

Even so, I found the saga a worthwhile read and would recommend it to others.