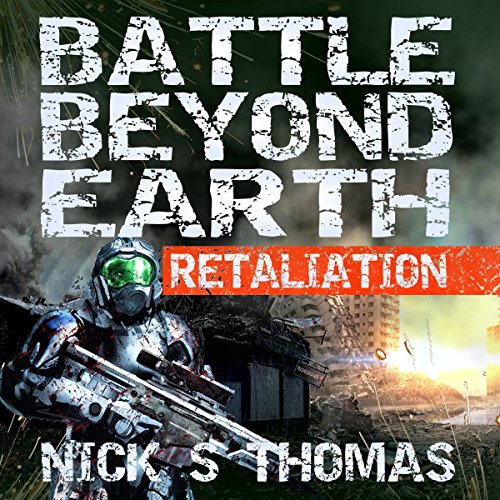 Battle Beyond Earth: Retaliation. The third instalment in an epic new series that tells of humanity's desperate struggle to survive in an uncertain and war-torn future.

War is almost upon the Alliance of four races. The window to prepare themselves for the invasion of the terrifying Morohta armies grows narrower each day. Colonel Mitch Taylor remains in recovery from the horrendous wounds he suffered at the hands of a Morohta prince. Lieutenant Jones leads sweeps throughout Alliance territory, watching and waiting. All fear the arrival of Queen Bolormaa and her sadistic sons, together with the vast armies they command.

A distress beacon leads Jones to the wreckage of a long lost ship, but what begins as mere curiosity turns into a terrifying fight for survival. A savage horde of primitive creatures, sent ahead of the main enemy force, lie in ambush. Cast out into space in a seemingly random pattern to attack any and all targets they can find. Taylor awakens to find that he is facing not only the enemy, but also pro-Bolormaa sympathisers back home. They must put an end to these new threats if the Alliance is to have any chance of standing against the Morohtan armies. Taylor has no choice but to return to a battleground he is all too familiar with - Earth.

What listeners say about Retaliation