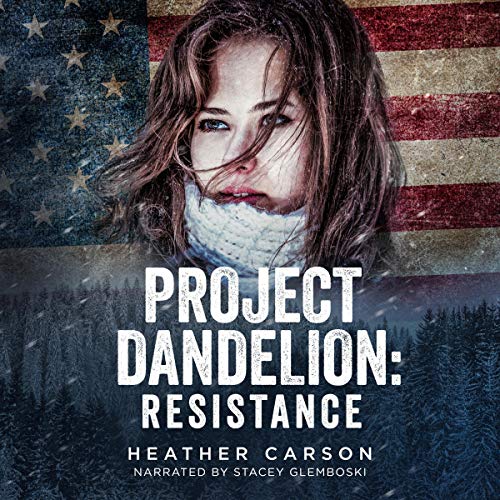 By: Heather Carson
Narrated by: Stacey Glemboski
Try for £0.00

As World War 3 rains down around them, the Resistance fights to maintain their stronghold. Meanwhile, Katrina faces her own battle as she searches for her place in this post-apocalyptic world.

When she learns a secret that could cause the Resistance to fail, duty forces Katrina to take action.

Will this decision require her to leave the life she worked for and the ones she loves behind?

Join this strong female lead character and her friends as they survive the post-nuclear-fallout world in this action-packed third installment in the Project Dandelion series.

What listeners say about Resistance

Amazing end to the trilogy

The third book didn’t disappoint! Exciting from start to finish!
I highly recommend this trilogy

One I’ll listen to again!

I received a free audio copy of this book directly from the author for an honest review.

Utterly devoured and will almost certainly be one I will listen to again, I have already demanded my mom listens to it and she’s not a huge dystopian fan but I know she would love these. The characters are well thought out as is the plot and the world building I honestly love this series.

Ahhh I have really enjoyed the characters in this series. I'm not sure if this was the conclusion or if there will be more. If there is more I certainly look forward to it.

I love a strong female lead, especially a young one, in a situation where technology can't help, because there is no technology. All characters are growing and maturing and some are creating the future.

Thank you Heather Carson for allowing me the priveledge of a free audio of this book I really enjoyed the entire series so far and enjoyed the narrator.

I look forward to what this author has install for us as she was new to me prior to this series.

Resistance by Heather Carson is the conclusion to the Project Dandelion trilogy.
I really enjoyed this entire post apocalyptic series and the final book did not disappoint!
The audio was well done and really made for a more enjoyable experience throughout the story.
I will definitely be looking out for more great stories from this author!

Survive by any means necessary...

I absolutely enjoyed this story! The entire series has been a blast, and book 3 did not disappoint! I highly recommend this series to anyone who is a fan of Hunger Games, or militaristic dystopians!

Narrator was perfect as always. she managed to capture the mood of each moment.

It was a good conclusion to the series! I would of liked it to continue and give us more insight into what happened next but still loved it!

I have listened to the the books in the series and I have really enjoyed them. You have conflict, resolution, loss, and survival. I highly recommend all of the books!

A great story about teens surviving a nuclear war! Will they learn to get along in order to survive! Narrator was good!

The third installment of project dandelion did not disappoint. As the series progressed all of the characters grew and molded to a strong unit. Several of the project dandelion kids have joined the resistance and they are finding their way in the new world.
I’m like a proud mama watching from
the sidelines. The girls, Katrina, Dreya, and Mia are awesome. I love their friendship and how they stick together no matter what!

I highly recommend the audiobook. The narrator is fabulous and her voice is easy to listen to and follow.

I’d recommend this series to kids 13+. Due to sexual suggestion, and post apocalyptic violence. If your a fan of the Hunger Games, and The Maze Runner definitely check this series out. Similar with kids but entirely on its own.