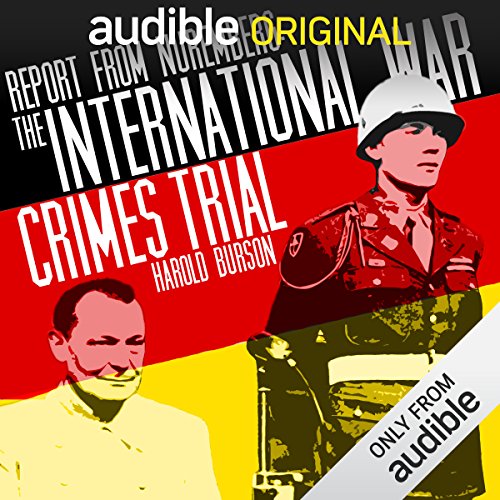 Audible brings to life through dramatic performance the 1945-1946 radio broadcast reports covering the greatest courtroom drama of the 20th century - the Nuremberg trials. The original broadcasts have been lost forever, but the verbatim text - written by Harold Burson, founding chairman of one of the world’s leading public relations firms, Burson Marsteller, who at the time was a reporter for the Armed Forces Network - has been newly interpreted by an ensemble of some of our fine actors. This original production, published here for the first time and only in audio, blends journalism, history, re-enactment and performance, and reimagines what it was like to experience first-hand this groundbreaking trial and to witness close-up some of the most infamous figures in recent world history: members of the Nazi ruling class. The production is being released on the anniversary of the opening of the first and most famous trial, November 19, 1945.

What listeners say about Report from Nuremberg

Definitely. Everyone should want to know what became of the men who committed arguably the most atrocious crimes of all time.

Was Report from Nuremberg worth the listening time?

Yes. As I said, it was very factual and informative. I am particularly interested in the history of the world wars and I learned a lot from listening to the Nuremberg trials.

My favourite part was listening to how they were all sentenced to death, except Hitler, who had already taken the cowards way out. It was a reminder that these men were not brave soldiers, but cowardly mice. They were revealed to the world and justice was done in the right way, in the way it should have been done; Lawful and dignified.

Now there was radio!

What made the experience of listening to Report from Nuremberg the most enjoyable?

This audio book is well worth a listen for the colorful first person descriptions from the AFN reporter Harold Burson about the Nazi leadership and the tenor of the Nurember trial. In that courtroom Cpl. Burson literally had a front row seat to history, and he did a terrific job in doing what radio reporters should do - bring the audience into the courtroom by his vivid descriptions. The names of the defendants mean little when read in the history books, but he tried to separate them in character from the "colorful scoundrel" (Goering) to the dutiful officers (Keitel, Jodl) to the bureaucratic monsters (Sauckel, Seyss-Inquart).

The frank description of Hermann Goering's takeover of the trial as he took the witness stand. I had heard after-the-fact criticism of Justice Jack's cross-examination, but Cpl. Burson confirmed it in his same-day commentary.

This audiobook is a collection of reenacted radio broadcasts providing news covering the Nuremberg War Crimes trials. Given all that has been written about the trial it is interesting to hear the contemporary radio reports. It is almost like CNN updates on the trials. The descriptions of the defendants and their dress, mannerisms and personalities were of great interest. I commend Audible for creating these reenactments and making them available. I enjoyed listening to them. The narrators were all excellent. The sound of the mechanical typewriter at the start of each broadcast helped me imagine what it must have been like to hear these broadcasts live.

"you are there" type

very interesting "you are there" type situation with the radio broadcasts and running "real time" updates from the trial. some good details in the description of the Nazi's on trial etc. and the limited info at the time (though we have more perspective from this distance and that adds to the horror at times). highly recommend for something different and for history buffs.

The first war crimes tribunal as experienced then

Where does Report from Nuremberg rank among all the audiobooks you’ve listened to so far?

It is a pretty good book particularly for its content: the tribunal that judged the 23 war criminals of the Nazi era. I was not familiar with the background and that is interesting

There are no characters, unless you call the war criminals 'characters'. That would be too much honor for them.

The narrators read the transcripts of the radio transmissions of American Forces Radio of 1945 and 1946, and provide a very good feel for the mood and sentiments of the day. It is clear that there being a War Crimes Tribunal was not as likely as it might seem today

This book is not good for a movie, but a documentary would be fine outlining the sentiments of the day: "kill those f*ing basterds!"

The reading is good and the interview with an aged Harold Burson at the end is a fitting and welcome addition to the report. However, the 'report' stops after the trial of the first 3 to 5 criminals and does not return to the trial. I would have enjoyed the book more if it would have returned at the final stages of the trial with the sentences of the criminals and their arguments. That would have rounded it off. But maybe those radio transcripts were no longer available...

This is a wonderful treat for students of WWII. It is the armed forces network reports from the trials. They interview many different people, so you get to know the terminology and setting very well. The reporting quality of the AFN is excellent, a real treat. In fact, it feels like the trial is happening now without knowing the outcome. They don't cover the executions, so don't get your hopes up for a big ending. It's the unknown at the beginning that is so interesting. I went through it twice, which I highly recommend.

It's an interesting perspective; very riveting! Extremely well done. However, not an in-depth historical review.

Only a ww2 war crimes fanatic.

Would you recommend Report from Nuremberg to your friends? Why or why not?

No. Very little interesting info about the convicts.

Would you listen to another book narrated by the narrators?

Huge hype that turned out to be a lame book.

The drama brought to life.

Would you listen to Report from Nuremberg again? Why?

I would to see if I'd missed anything.

What was one of the most memorable moments of Report from Nuremberg?

I can't pick one.

The film of the holocaust they showed.

Not much depth of information about the trials or defendants. Interesting but I didn't learn much.