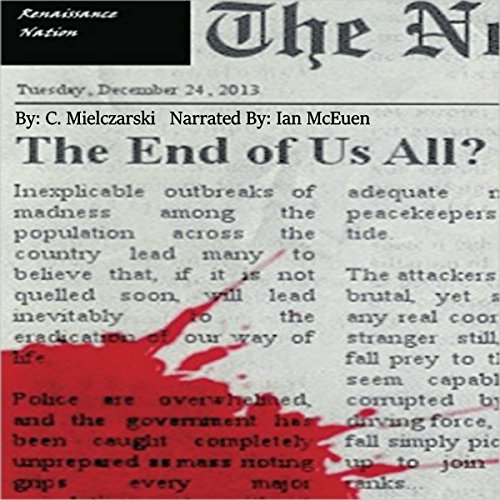 Safety. Security. For Christopher Stone and those closest to him, these concepts evaporate in a matter of moments as the world is ravaged by a wave of violent transformation which leaves everyone facing an enemy no one ever prepared for.

It starts out small, so subtly that anyone who could possibly do anything to counter it fails to take notice until well past the tipping point. The outbreak of savage behavior eventually spills over, leaving governments in shambles, infrastructure disrupted, and hundreds of millions seemingly dead. It would be only a matter of time for the survivors to band together and recover. If only the dead had the decency to stay that way.

Now, Stone and his family find themselves on different ends of the country, caught up in the aftermath of the event. As Stone races in hopes of making an escape to the rumored safe havens in the north, he stumbles across not only a possible explanation for the outbreak, but those who would see it continue for their own twisted benefit.

Yet all is not well for those left waiting either, as they find themselves ensnared in a bitter fight for survival against those who are more than willing to ensure their own existence by any means necessary, even if that means a few more dead. Pushed to the brink, in a new world where everyone finds themselves hunted, fighting for survival against one threat or another for days on end, the survivors just want to find a place that can truly be safe again.

What listeners say about Renaissance Nation