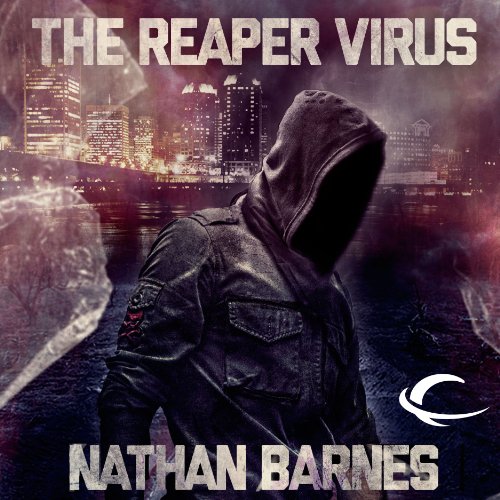 By: Nathan Barnes
Narrated by: Basil Sands
Try for £0.00

Enjoy the end of the world through the eyes of a desk-bound civil servant. Nathan is a middle-aged father and husband working as a police dispatcher for the campus police of a large university in Richmond, Virginia. During late night working hours he gathers details on the R33PR Virus, dubbed the Reaper Virus, as it spreads from the far reaches of the globe into a pandemic that begins infecting the city around him. As the city rapidly succumbs to the Reaper Virus, Nathan becomes trapped at the police station while his family waits in their barricaded home.

Driven by an obsessive determination to save the ones he loves, Nathan travels through a hellish world having to battle himself as much as the living and dead evils that plague the land.

What listeners say about The Reaper Virus


as the story opens, the main character, nathan, is at his job. he is a police dispatch officer at the vcu (virginia commonwealth university) police station. nathan works the midnight shift and between calls, he's been pouring over the news about the latest virus going around that's making people sick. the r-32 pr virus is highly mutable, and the latest version, 32, is starting to cause 3 out of 10 people to develop some strange symptoms- their veins become black and visible and are prone to violence.

when a call comes in that a bum is attacking a student, nathan's friend, lance, is sent to investigate. however by the time lance gets there, the bum is dead. the rookie officer shakily explains that the bum was attacking the student and wouldn't heed his calls to stop. then when the bum started to come after him, body shots didn't stop the bum. only an accidental face shot stopped him. lance is sworn to secrecy by his commander.

the next night, nathan finds a mysterious note from lance, saying to meet him after his shift and that he doesn't trust the phones. over beers, lance tells nathan about the scene he came upon- how the bum had bitten chunks out of the student's body and even bitten off the tip of the student's nose. lance tells him that if any of this gets out he'll be in serious trouble, and that he's only telling him b/c they're friends and nathan has a family. when nathan jokingly says that lance's story reminded him of the zombie movies they'd watched, lance acts as if he's been struck by lightning. but they both resolve that they need to make plans just in case the $h!t really hits the fan.

a couple of nights later, nathan and lance find themselves trapped in the police station. their commander has ordered a lockdown- nobody in and nobody out until help arrives. so, they scheme to sneak out to get home to their families.

i liked this story. even though nathan works for the police, he doesn't carry a gun on the job. he's a 30 something overweight dispatch caller. lance has the only gun as they flee, but it's a weapon of last resort. as they flee the police station, they decide to sneak through vcu's campus. it is an interesting perspective i haven't listened to.

plus, i may be a little biased, but i graduated from vcu so i'm really familiar with the surroundings. it was the first story i followed on google maps (just type in vcu police). it was kind of a thrill listening to a zombie story that takes place in my hometown. geezzz! the fictional character, nathan, lives 5 to 10 minutes away from me in south side. LOL

all biases aside, this is a pretty good zombie apocylapse story. the character makes choices opposite to those in other zombie novels. no, i'm not going to tell you what i mean! this is mostly an action story with some character development. the story is told in first person by nathan. i think the author does a good job describing the mental and physical hell a person would go through trying to get home to his family.

the narration is pretty good. there aren't a lot of characters, but i was happy with the performance. the narrator, basil sands, reminded me of ray porter from joe ledger stories.

the epilogue is kind of weird. it was the only part that threw me. i was like WTF? how am i supposed to take this? i won't spoil it. but, i'm hoping there's a second book.

What disappointed you about The Reaper Virus?

The main character is an annoying guy. He either spaces out and doesn't pay attention or gets hyper worried about doing something dumb that gets him killed before he gets home. In the end you are actually rooting for him to die.

Would you ever listen to anything by Nathan Barnes again?

Too many uses of the same analogy and meatphors so probably not. Also logic flaws in what he has main character do.

Did Basil Sands do a good job differentiating all the characters? How?

Ok for what he was given.

I can't believe that this story---zombie apocalypse, of all things---was so boring! I gave up 3/4 of the way through. The writing is stilted and the author makes very awkward and obvious attempts to use "big words" to make the writing seem more literary. I felt kind of sorry for the narrator having to read this, but his performance was also stilted and fairly monotone.
The author drags the story on and on with overly verbose descriptions of each zombie the main character sees. Okay, okay---black vomit, missing limbs, head twisted around---we got it! Enough already!
Perhaps it wouldn't have been such a bad story if there were other narratives braided in, such as what the wife and kids were doing at home, what the fate of the dispatch center was, how his cop friend survived/didn't, etc.
If you want a good ZomPoc story, 'Day By Day Armageddon' is a thousand times better.

This book is right up my alley, love the premise and the story.

Definitely a great zombie story, right up there with a lot of my favorites.
Kept my attention, and I'd definitely be up for reading/listening to more from this author :)

The narrator, Basil Sands, is AWESOME!! I first discovered him when listening to Peter Meredith's The Undead World series (which is at the top of my favorite list), and he's one of my favorite narrators of all time.

Definitely worth a check-out, give this one a whirl. :)

This was a good story. very enjoyable and the narration was Excillent. the narrator brought a depth to the story that makes the story come to life.

More excitement, less boring story and get a different narrator.

Would you recommend The Reaper Virus to your friends? Why or why not?

The narrator sounds like he's giving orders to troops throughout most of the story. His attempts to do other voices, especially female voices, is awful until he gets to a character named Phil at which point he suddenly seems to master the ability. The female voice issue isn't that his natural voice is too low, it's how he imagines feminine voices appear to sound. It's grating.

At some point in the story I either developed an appreciation or Stockholm syndrome type feelings towards the readers vocal style or he softened and got better, I'm not sure which.

Phil, the character we meet half way through/

The story reads like a prep list for the Zompacalpyse at first and later like a "how to escape" for various exercises added to a "here's how every zombie I passed looked" list. It's meh.

Halfway through the story the character, Nathan who was cleverly named after the writer, started mentioning God when it hadn't really come up before. I wouldn't actually care except it started getting pretty heavy, but not in the "I'm starting to believe because holy crap I might be eaten in a few mins" kind of way. In one line he calls God cruel and then talks about how he can't wait to see him. I can't say much without spoiling the story, but it was illogical. There was zero point to the epilogue. The ending was too hurried and the words spent in the pointless epilogue could have been used to enrich the ending. It didn't feel hurried in the "gotta do it!" kind of way; more like the writer ran out of juice. It was...disappointing.

Would you try another book from Nathan Barnes and/or Basil Sands?

if you are reading this, don't waste your time and money on this audiobook. the story itself; was actually pretty good but the narrator sucked. he mispronounced words, like ancient; he says ankshint. that was not the most annoying thing. the narrator barely ever changes his voice, tone, or has ever heard of timing in between entries in the book. seriously where did you learn to read an audiobook? Cooking school!? i'm getting my money back. if audible seriously pays this guy to narrate audiobooks; i'll re-narrate this book FOR FREE!