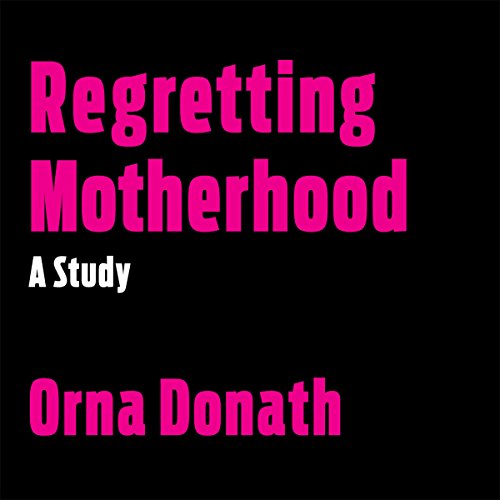 By: Orna Donath
Narrated by: Mandy Kaplan
Try for £0.00

Women who opt not to be mothers are frequently warned that they will regret their decision later in life, yet we rarely talk about the possibility that the opposite might also be true - that women who have children might regret it. Drawing on years of research interviewing women from a variety of socioeconomic, educational, and professional backgrounds, sociologist Orna Donath treats regret as a feminist issue: as regret marks the road not taken, we need to consider whether alternative paths for women currently are blocked off. She asks that we pay attention to what is forbidden by rules governing motherhood, time, and emotion, including the cultural assumption that motherhood is a "natural" role for women - for the sake of all women, not just those who regret becoming mothers.

If we are disturbed by the idea that a woman might regret becoming a mother, Donath says, our response should not be to silence and shame these women; rather, we need to ask honest and difficult questions about how society pushes women into motherhood and why those who reconsider it are still seen as a danger to the status quo. Groundbreaking, thoughtful, and provocative, this is an especially needed book in our current political climate, as women's reproductive rights continue to be at the forefront of national debates.

"Donath breaks open what she describes as an 'unspoken taboo,' bringing the notion that women regret becoming mothers into the public discourse with her latest research....The most valuable elements of the book are the different perspectives provided by the interviews, which reflect a striking amount of self-awareness (and, often, suffering) from women who have otherwise largely kept silent." (Publishers Weekly)

"Forthrightly feminist ... Donath's study fills a gap in discussions of women's lives and choices. While it will undoubtedly be a hard pill for many to swallow, it is also a necessary one." (Foreword Reviews)

"Donath carves out a much-needed space for these women to share, in their own words, stories about how they got to where they are, and how they manage now. Mixed in with these interviews is analysis by Donath, who expertly examines and questions the structures of a capitalistic, patriarchal society that not only contributes to women finding themselves in this position, but also prevents them from speaking about it. Many have never heard sentiments like the ones shared by Donath's interviewees - and that needs to change." (BUST Magazine)

What listeners say about Regretting Motherhood

This is a grest study!

If you have the slightest doubt about becoming a mother you should most definitely listen to this book before taking a final decision.

Brilliantly written by Orna Donath, well narrated by Mandy Kaplan. This subject I found very interesting and one that should be talked about much more. Don't just have kids because everyone else are having them, ask questions etc

The research revealed in this book is eye opening. It gives a voice to women who had children but wished they hadn't. Most of these women love their children, but have found the role more or less miserable.

I walk away with these thoughts ...

Motherhood is overtly and covertly pushed on many women.

Women are not permitted to talk about their feelings of regret after motherhood, or warned, in advance, about the unhappiness, discontent ... that defines motherhood for some.

This mechanism is perpetuated by society to preserve the social order which depends on women having children and serving families selflessly for free.

Perhaps, in part, more truth about motherhood sooner, so women have a better understanding of what motherhood can cost, so women can make better choices before becoming pregnant.

More acceptance for child free women, so its a valid choice without penalty.

Much more support for mothers, division of labor with fathers and such.

As a childfree woman who is constantly pressured and badgered to make choices I do not want, I found this book vindicative. Your important work has reaffirmed my own thoughts and decision to stay true to myself. Please continue your work - you are helping women everywhere! To the mothers who participated in this research, thank you from the bottom of my heart. you are the real heroes for speaking your truth.

I hope this study becomes more and more available to young people so that they can make a more informed decision about becoming parents.

being a female in her early 20s this book gives great insight into the said of mother hood that is looked over.

Refreshing read! No judgments just factual real women having the courage to say how they feel. Be open minded when reading and listen to others perspective. Love this book!

I loved this book from the beginning to the end. Helped me a lot. I never wanted to be a mother, and after I turned 30 and got married, the questions about kids started to make me feel uncomfortable, but I was always afraid to hurt people’s feelings for saying “ I don’t want to have kids”.
After this book , I’m a proud child free woman !!!!

Fantastic and everyone should listen!

This was very well constructed and clearly narrated. I didn't think this would give me any more new viewpoints, but heck, it did. I am now 100% sure i will go through sterilization, as this book repeated my feelings and gave them even more substance from mothers' view.

Work like this is absolutely vital to seeing women as multifaceted people with complex emotions. Boldly and thoughtfully written.

This is a qualitative study on a handful of women from Israel who regret motherhood. I love the distinction made about how one can regret motherhood/parenthood without regretting the children it created. I definitely think this is a topic that needs to be discussed more and more, in all areas and facets of life. I feel like I have more information to truly analyze and consider if motherhood will one day be the right choice for me.

If you’re child-free or on the fence, this is a great listen to expand your awareness of different perspectives.

Semi easy listen because it's a lot of emotion to take in, but much needed listen for anyone who pressures others to become others, as well as anyone debating motherhood. Good narration.