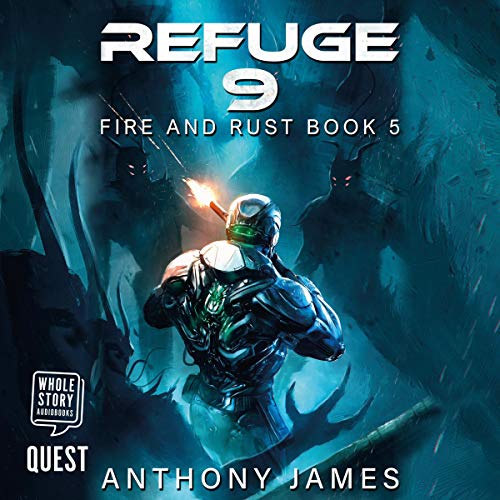 By: Anthony James
Narrated by: Andy Ingalls
Try for £0.00

Refuge 9 is a fast-paced military sci-fi shooter filled with spaceships, guns, tech and warfare. It follows on from book four in the Fire and Rust series, Death Skies.

The Sekar aliens have already killed billions, and nobody knows where they came from or how to defeat them. The enemy’s only weakness is tharniol - the rarest substance in the known universe. Desperate times call for desperate measures, and a shaky truce is made with the Raggers.

The Raggers claim knowledge of data that will assist in the fight. Unfortunately, the data is buried deep in a subsurface facility on a fringe planet called Glesia - a facility which is crawling with Sekar. The mission to recover it goes wrong from the outset, leaving Captain Tanner Conway and his squad the task of rescuing an impossible situation. With limited ammunition and no chance of a resupply, they must fight their way to the mission goal.

What listeners say about Refuge 9