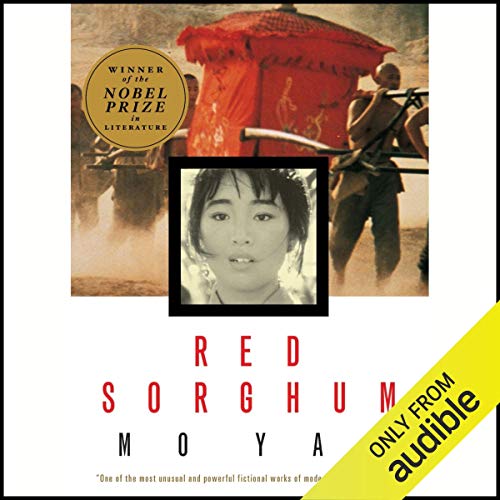 The acclaimed novel of love and resistance during late 1930s China by Mo Yan, winner of the 2012 Nobel Prize in Literature.

Spanning three generations, this novel of family and myth is told through a series of flashbacks that depict events of staggering horror set against a landscape of gemlike beauty, as the Chinese battle both Japanese invaders and each other in the turbulent 1930s.

A legend in China, where it won major literary awards and inspired an Oscar-nominated film directed by Zhang Yimou, Red Sorghum is a book in which fable and history collide to produce fiction that is entirely new—and unforgettable.

What listeners say about Red Sorghum

I feel battered and bruised

I finished this book, because, dang it, I finish what I start. But it was a slog. I felt like I was pushing through an endless sorghum field being randomly battered by criminals hiding in the thick. The writing is vivid and powerful, but the story, and the pain, and the violence, and the utter lack of Hope, leave me feeling tired, with no desire to revisit the story or the pages. I appreciate the look into pre war, post war, pre revolution, post revolution China, but I couldn't lose myself in the pages. it's been since I read Love in the Time of Cholera that I just felt relief at getting to the end of a book, rather than pleasure and accomplishment. I do appreciate the rich symbolism. the red sorghum is at once the source of the family's income, a setting for their pain, and a symbol for their loss. But my overwhelming feeling is relief at being done, and I'm not going back

The narrator was hands down the best I've heard on audible. he spoke with passion that really made you feel the story. the novel itself can be a little hard to follow, switching between various timelines, but the imagery and realism both in the novel and performed by the narrator makes this a must listen!

Vivid! And narrator is great

This book was awesome. At some points i had trouble “putting it down” and was flying through it with relish. Though towards the end it started to get slightly repetitive. The prose was simple but painted an extremely vivid picture...it was very easy to imagine exactly what the setting was like. It also captures aspects of life and relationships that are rarely captured in novels and they felt extremely realistic/believable. Finally it does an amazing job of painting the horrors of the Japanese invasion of China and the struggles of living in poverty. Also, the narrator was fantastic. One of the best

Beautiful book, less so the narration

Eloquently written with amazing imagery, but not as insightful as one may like, and alas the narrator left many characters sounding whiney and dimmed their expression and potential development.

Very violent plotline. i strugled a little bit with it cause it is a bit long.

Not One Hundred Years of Solitude

A poor copy. Entertaining, to be sure, but it is an initiation, and imitation is its flaw.