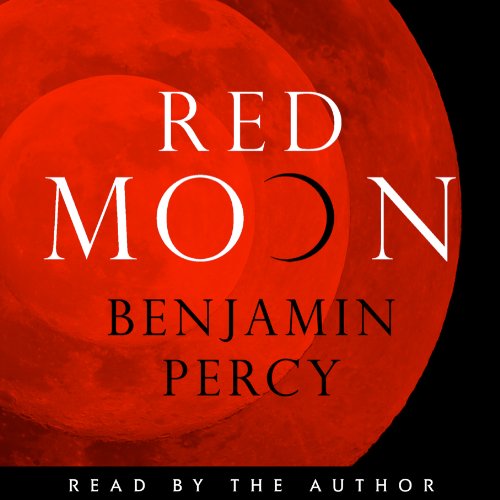 They live amongst us. They are your neighbour, your mother, your lover. You think they are safe. They change.

Every teenage girl thinks she's different. When government agents kick down Claire Forrester's front door and murder her parents, Claire realises just how different she is. Patrick Gamble was nothing special until the day he got on a plane and, hours later, stepped off it, the only passenger left alive. A hero. President Chase Williams has sworn to eradicate the menace. Unknown to the electorate, however, he is becoming the very thing he has sworn to destroy. Each of them is caught up in a war that so far has been controlled with laws and violence and drugs. But an uprising is about to leave them damaged, lost, and tied to one another for ever.

The night of the red moon is coming, when an unrecognizable world will emerge, and the battle for humanity will begin.

"Benjamin Percy is one of the most gifted and versatile writers to appear in American publishing in years.... His prose has the masculine power of Ernest Hemingway's, but also the sensibilities and compassion of Eudora Welty. His writing is like a meeting of Shakespeare and rock 'n' roll. Benjamin Percy knows how to keep it in E-major, and what a ride it is." (James Lee Burke, author of Feast Day of Fools)
“With Red Moon one of our most blazingly gifted young writers stakes his claim to national attention. Benjamin Percy has one great advantage over most writers who attempt "literary horror": he understands the literature of real horror from the inside out, and he speaks it like a native. This is a novel with the power to thrill and transport, also to lead the reader well out of her comfort zone and into emotional territory few people have ever seen." (Peter Straub)

What listeners say about Red Moon

I have given up reading this book
I got to within the last 4 hrs but can't be bothered going on
The slow reading style really does my head in.
To the point I had to put it on a faster speed.
And the reader has a really deep voice
So slow in fact I thought my iPhone was going wrong.
When he puts on a voice for someone with a deeper voice I was expecting him to say
" hello ..... I want play a game"
Then make me escape some death trap.
Anyway this storY starts with lots of promise then total gets lost in itself. Flicking from scene to scene and leaving the listner thinking.
Did I miss something or did the mp3 skip somehow?
Won't be looking for anymore from this writer

I wouldn't choose another book by Benjamin Percy.

What could Benjamin Percy have done to make this a more enjoyable book for you?

The story was bad enough, but (sorry Mr Percy) the delivery was so slow, every sentence drawn out for gothic effect, it almost succeeded in putting me to sleep.

Would you be willing to try another one of Benjamin Percy’s performances?

No, I found the pace of the delivery, milking the 'atmosphere' into thick slurry, extremely boring.

If you could play editor, what scene or scenes would you have cut from Red Moon?

Most of the totally unnecessary graphic gore, descriptive death scenes...

I can't recommend this book. Can I delete it from my library?

What disappointed you about Red Moon?

The narration. Pure and simple. I am sure Benjamin Percy is a great writer and I am sure his deep booming voice would be wonderful for some types of voice work...reading an audio book is not one of them.

It was too deep, too slow and I ended up losing interest. In fact it wasn't even that. I usually listen to audiobooks as I drive back and forwards to work and I just ended up lost in thought and paying no attention to the book. So I gave up. Sorry.

Who might you have cast as narrator instead of Benjamin Percy?

Just someone better suited to a long book. Deep and booming is effective, but not for hours and hours of listening.

Gave the Overall and Story 2 stars each as I can't really rate it one way or another having been put off by the narration. I will say I do want to read the book, but on this occasion it will be the good old printed version!

OMG The Narrator is sooo laborious!

It was time fairly well spent but at times I wanted to hurry through it.

The story was good but sometimes it was a bit visceral and unnecessary. If I could chuck bits out it would make it a better book.

Who might you have cast as narrator instead of Benjamin Percy?

Anyone with a less deep and slooooow voice.

Do you think Red Moon needs a follow-up book? Why or why not?

There must be a follow up as there were too many loose ends.

Interesting perspective on discrimination and ultimate what-if scenarios. Stop thinking werewolves; other ethnicities, gay, other religious convictions - this could happen. Maybe already has.

What would have made Red Moon better?

No just one read by this chap

Would you be willing to try another one of Benjamin Percy’s performances?

If you could play editor, what scene or scenes would you have cut from Red Moon?

didnt make it far enough to make a judgement on this

werewolves: a metaphor for clichéd writing.

What would have made Red Moon better?

The story would have been much better if it didn't involve werewolves. The use of them just seemed to be a tired metaphor for any other civil rights/genocidal/persecuted minority throughout history. By using werewolves as the oppressed it gave the author the lazy ability to inject some sort of action and drama into an otherwise lacklustre plot.

The book has only put me off other Benjamin Percy books.

Listening to Benjamin Percy was like listening to advert voiceovers for hours on end esp. Carlsberg: "probably the worst werewolf romance in the world."

Some descriptive sequences were very evocative and atmospheric.

Thankfully not a 'Twilight'

I started writing a long detailed review on this book but realised there was so much to cover that the review was getting too long.

I suspect that is what happened with this book. The author has a great idea set against the political backdrop of 9/11 but with Werewolves not Islamic Extremists (We will ignore the 9/11 conspiracies for now). But then the story got away from him and he didn't quite know how to tie up the loose ends and too much got edited out.

All of this, in my opinion, lead to a book which feels incomplete and lacking detail. Not to mention characters who I couldn't remotely like or even relate to. By the end of it I was rooting for Baylore as he seemed to be the only one with a personality and a plan (all be it evil) he stuck with. The others seemed like self indulgent muppets.

The narration was both brilliant and poor. There were times when the slow deep style of narration really built up the suspense, but more often than not the rhythm and tempo could have been sped up a little to keep the already jarring story line flowing.

Overall I am glad I finished the book as I was getting very little enjoyment from it.

Ok, I have to admit, in deference to comment in others' reviews, that the allegory this book draws between the treatment of the werewolves in the novel and the treatment of minorities and the terrorist/freedom fighter dichotomy in the world today is rather belaboured and less than subtle and is the only reason for pulling a star from the story rating.
The novel depicts an alternate world where the same kind of prion mutation responsible for the BSE/human-variantCJD transition results in some humans mutating into lycanthropes and this difference has resulted in their being discriminated against. As the reader joins the story the lycanthrope fight for equality becomes much more direct and bloodthirsty (terrorists and planes ring any bells for anybody?)and relations between the two communities degenerates precipitously.
We meet characters from both sides of the battle-lines as well as very believable characters caught in the morally ambiguous hinterland of innocents dragged into machinations beyond their control.
As I said, the political allegory isn't vastly original or deftly handled but the writing itself is an absolute pleasure. Yes, Percy can sometimes linger a little too self-indulgently in the occasional description but overall the quality of the writing is very high and an important part of the pleasure which I found in this book. The plot is also a key element: it is well thought out, convoluted and fast-moving and though for me the climax felt a little too fast for such a long novel this is of little detriment to the whole novel. Then of course there is the barration, which is carried out by Mr Percy himself and my, but what a voice he has on him: so deep and baritonal that I thought it might start to grate but I needn't have feared as he was a pleasure to listen to and having the author narrate means that many of those jarring mis-inflections and stresses which jump out in other audio books do not happen. So, like the English teacher I am, I must congratulate the author not only on his writing but also his reading.
I heartily recommend this novel: it is an original approach to a werewolf themed novel and a well written "horror"/thriller romp.

An Edge of the Seat Story

When i downloaded this, I had no idea really that it was about Lycans... however, I was on the edge of my seat and 'into' the book from the start. The Author's Voice is like black velvet, or smooth chocolate, a delicious and sensual walk through a deep and dark novel. I listen to this on my drive to work, and have been just itching to get in the car at the end of the day just to find out what happens next. Highly recommended.