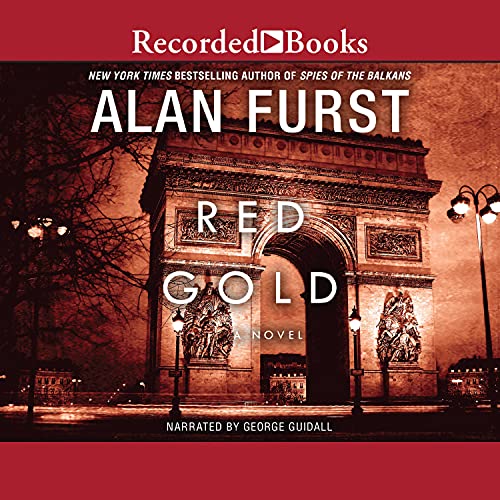 By: Alan Furst
Narrated by: George Guidall
Try for £0.00

In this sequel to the acclaimed The World at Night, reluctant spy Jean Casson returns in another haunting and atmospheric thriller set in the shadows of occupied Paris.

In The World at Night, Alan Furst introduced film producer Jean Casson, who is forced by the German occupation of Paris to abandon his civilised lifestyle and falls into the world of espionage and double agents - until he is forced to flee the country.

In Red Gold, Jean Casson returns to Paris under a new identity. As a fugitive from the Gestapo, he must somehow struggle to survive in the shadows and back streets. He is determined to stay clear of trouble, yet as the war drags on, Casson begins, inevitably, to drift back into the dangerous world of resistance and sabotage.

"This innovative and gripping novel eloquently transports us back to a different era and a different world." (Amazon.com review)

What listeners say about Red Gold

Superb in every way

Fantastic book by Furst, read by a master. Its just doesn't get any better than this.

Continues the saga of Jean Casson

A decent follow-up to 'The World At Night', 'Red Gold' continues the saga of Jean Casson's struggle to survive both morally and physically in Nazi occupied and collaborating France.

I prefer Furst's novels that center on Eastern European characters ('the Polish Officer', 'Dark Star', 'Night Soldiers') instead of French, but it is hard to deny that even though it isn't a major Furst novel, it is still a highly readable one. Using Jean Casson allows Furst to explore the world of those French collaborators, profiteers, and elites of Pétain's France who refused to see the German occupiers for what they were. Furst clearly demarks the fragmented France that was left after Germany's invasion and the Vichy collaboration.

This novel should be read closely with 'A World at Night'. Like I wrote about that novel, even though I find this to be a minor Furst novel, it is context that matters. Most spy novelists don't approach the art or the skill of a minor Furst novel. So enjoy.

This latest Furst is another great, atmospheric story of Europe during World War II -- the ordinary and not-so-ordinary human beings who lived every day through terrible times, doing what they thought they had to do just to survive but also to make the world better. Furst takes the reader back into a world we can only imagine now, and brings it completely to life. The grubby details of daily life under totalitarian regimes (in this case, Paris during the Occupation)are very real in Furst's telling, as is the nature of heroism -- ordinary people impelled, for their own reasons, to brave acts of resistance, sabotage, and espionage. George Guidall's reading heightens the atmosphere and brings the characters to life -- his dry, wry, world-weary tone is just perfect for Furst's works, and his adept characterizations help us visualize these people.

Not a good choice for one's first Furst

The author continues to do a remarkable job of vividly painting a portrait of war-torn Europe. However the storyline drags oh so slowly. Would not recommend this to the novice Alan Furst reader.

Great book, perfectly read. It's hard to go wrong with Alan Furst. If you like his other books, you won't be disappointed with this one.

A bit hard to follow, several characters, several story lines but Furst is a master of spy-noir and his history is perfect. Guidall is a master. I'd listen to him read a phone book. Accents, voice levels, genders and nationalities are all spot-on.

Same lead character as book one, but the story just didn't grab me. Felt like too many different threads maybe, and not enough holding it all together? not sure, but just wasn't as good as previous.

Well, its about Nazi's crushing the human soul. I love George Guidall, but this story was depressing and kept on with a main character that had few redeeming qualities. For me, a very bad choice.

Good but getting a bit repetitive.

The Paris occupation and the evolving resistance through the story of one man and god various friends associates and others in the movements. Well written and a good story but after a while it goes on a bit and gets a bit repetitive. Could probably have been shorter and maybe even combined into the other book with the same character.

another excellent example of the underground

I often hope to hear new elements of the French Underground during WW2 and find Mr Furst has knowledge of operations that are, if entirely made up, then very imaginative, and if they're historical, they show some real research. I like his characters and their attitudes which betray hints of noir and 'very french' indifference.

Another exceptional book, replete with both history and excitement

I am excited for the next installment of Jean Casson’s life in WW2 Paris.
As nasty and evil as the Nazis were, they could not have managed such murder and mayhem without the active and enthusiastic complicity of large segments of the populations whose countries they occupied. Because of France’s successful rewriting of WW2’s history, we tend to forget just how extensively the country collaborated with their German masters.
This book provides a window to this shameful episode in French history.