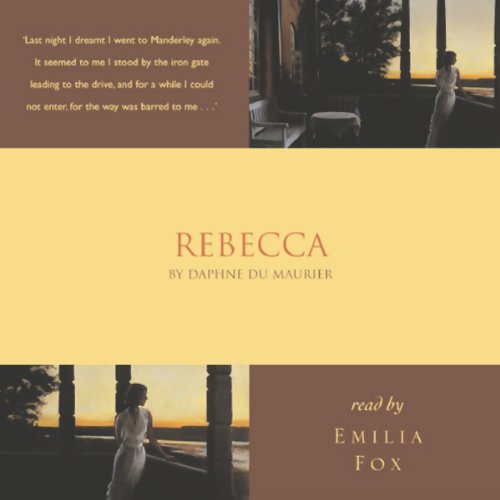 By: Daphne du Maurier
Narrated by: Emilia Fox
Try for £0.00

"If Daphne du Maurier had written only Rebecca, she would still be one of the great shapers of popular culture and the modern imagination. Few writers have created more magical and mysterious places than Jamaica Inn and Manderley, buildings invested with a rich character that gives them a memorable life of their own." (Richard Kelly, Professor of English, University of Tennessee)

What listeners say about Rebecca

I read this some 20-odd years ago and ended up buying the audio version to accompany me on a long train journey. Not only was I locked away in my own private little world I can honestly say I think I got more enjoyment out of it being read to me than reading it! Funnily enough I was travelling to Cornwall were the book is set!

What disappointed you about Rebecca?

When I purchased this I didn't realise it was a shortened version. Had I realised I wouldn't have bought it. It was very heavily edited. You might as well watch the Hitchcock version of the film.

Would you recommend Rebecca to your friends? Why or why not?

I like Emilia Fox's narration of Mrs De Winter, but that's all. I wouldn't recommend it unless you can't be bothered with the full story.

What does Emilia Fox bring to the story that you wouldn’t experience if you had only read the book?

I saw her in play the character in the TV version and I think she was well cast. She comes across well as Mrs De Winter in this version and also doesn't overplay the other characters.

If you could play editor, what scene or scenes would you have cut from Rebecca?

I wouldn't cut anything from this version. It's already too heavily cut.

Brilliant narration - perfect for this book

Emilia Fox was an inspired choice to narrate this version of Rebecca. I must have read this book many times and seen various TV versions - but listening to this was every bit as gripping as encountering it for the first time. I'm always amazed how brief the novel is when you consider how powerful it is - Daphne du Maurier doesn't spend a lot of time on descriptions of secondary characters, but with Emilia Fox's narration it is completely compelling and you are one hundred percent inside the head of the second Mrs De Winter.

I really enjoyed listening to this classic, I'd never read it before.
Emilia Fox does a fabulous job with the performance - of course!

I really enjoyed this version of Rebecca. It is great for a long drive.

Great story - well-balanced and well-told. However, it's very much of it's time regarding the motivations of the characters.

love this story and Emilia Fox reads it brilliantly, would recommend this book to anyone.

Love this book, one of my go to novels on a rainy day. Enjoyed "listening" to it for a change, makes it feel like a brand new story.

This book made me think quite deeply. It is very thoughtful.. a very great book to listen to

It was ok, I loved the narrator but it felt too abbreviated to really hit home. Maybe go for a longer version.