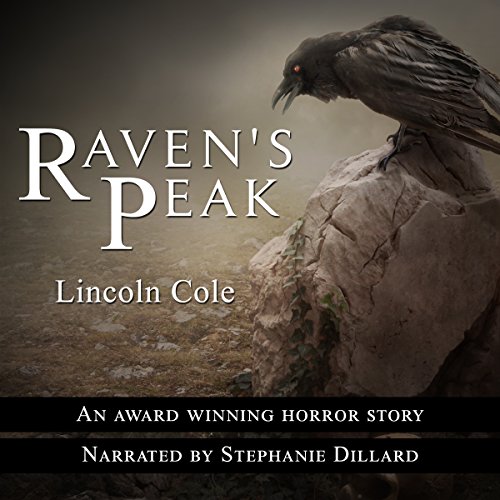 A quiet little mountain town is hiding a big problem. When the townsfolk of Raven's Peak start acting crazy, Abigail Dressler is called upon to find out what is happening. She uncovers a demonic threat unlike any she's ever faced and finds herself in a fight just to stay alive.

She rescues Haatim Arison from a terrifying fate and discovers that he has a family legacy in the supernatural that he knows nothing about. Now she's forced to protect him, which is easy, and also trust him if she wants to save the townsfolk of Raven's Peak. Trust, however, is considerably more difficult for someone who grew up living on the knife's edge of danger. Can they discover the cause of the town's insanity and put a stop to it before it is too late?

What listeners say about Raven's Peak

Intense from the start!

Loved it! Such a great book! Demon’s, hunters, secret societies, the innocent bystander who becomes embroiled in the story, magic, guns and... well, you should listen and find out! Honestly, so well written with deep characters whose story unravels as you go with great fight scenes and intricate storyline. And Stephanie, well, she does any amazing job with narration. Great pacing, brilliant character voices and differentiation. Literally, there’s nothing to dislike; I need to get book 2 on the go quickly!!

I had to start this book a few times. I had a hard time staying focused and as the plot moved along I became less and less interested. I don't think this was a bad book, but there wasn't anything that particularly stood out to me. I also wouldn't call this horror at all. To me it was more fantasy with a demonic presence.
The start of the story, after the forward, took off in a decent direction with potential. From there it started to turn weird and unbelievable. With all the books out there in this genre I just couldn’t find anything exceptional to make me want to continue on with the series. Even the ending was quite predictable. I hope I am in the minority on this.

Stephanie did a great job. I liked her difference voices and oddly really enjoyed her voice for Haatim.

Rough Start but well worth sticking with.

The beginning of the story was a little confusing because it just drops into the middle of something we know nothing about. As the story progresses, the beginning gets explained and becomes much clearer. I know this technique is used quite often, but this story opening expects you to know something about where it is going.
Beyond this (about the first half hour or so), the story is really good. Well written from that point out and thoroughly enjoyable. The concept was interesting and the story progression was fast paced.
The Narrator was great. Struggled a little in the beginning, but I think that was more the story than the narrator, but after that, she did a fine job.

I received a free copy of this audiobook and I am leaving a voluntary review.

This is full of adventure and excitement.I enjoyed it.Abigail is a cop,of sorts.She is part of a team that takes care of things.Hateen is just a nobody caught up in a chase,or is he?The play off these two is really interesting,though at times too repetitive.Stephanie Dillard was a very good narrator.“I was voluntarily provided this free review copy audiobook by the author, narrator, or publisher.”

While the beginning of this book didn't do the story any favors (it was slow and confusing, I almost stopped listening) if you hang in there, it turns into an interesting book. I wouldn't classify this tale as horror despite the content being about demons and demon hunters, I would consider it more of the paranormal-thriller genre. It wasn't scary or unsettling like horror should be, in my opinion.

I only finished this book a day or two ago and I can already barely remember the details. It was interesting enough while I was listening but if I can't recall much of the story, then I don't think I can recommend it to my friends. It just didn't grab me like most horror/paranormal/thriller content does. That said, Stephanie Dillard did a great job with the narration - her performance definitely added to the experience.

Love her so much! This is a great story. The world is slowing coming into focus! Love this book!

What a story for the first one in the series. Impossible to stop listening until the entire story is finished. The narrator was easy to listen to.

Better than when I read the story

I love Lincoln Cole' work and Stephanie did a great job. Thank you very much

I had a hard time getting into this book. I stopped and restarted 2-3 times but, I am so very glad I gave it another chance! After the first 20-30 minutes, it picked up and I couldn’t stop listening. I’m off to by the 2nd in the series because I have to know what happens next right now! That is really my only complaint, the cliffhanger. The narration is fabulous. I received a review copy at my request and voluntarily reviewed.

I really enjoyed this story. It reminds me of supernatural and Buffy but with a more serious note. Like how they fit in the real world while fighting in the supernatural world.

This series is going to be great. I want to find out more about all the characters. I received this audio book for free at my request and voluntarily reviewed