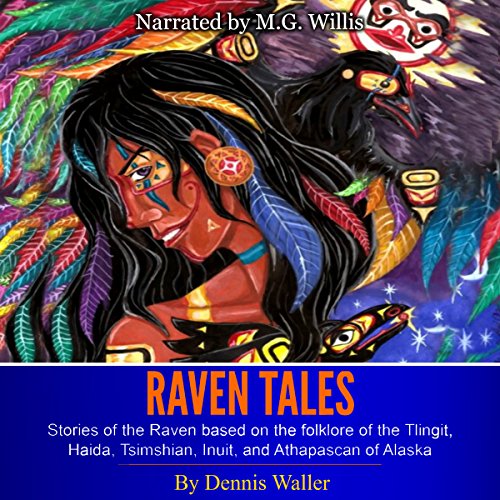 The Raven is as much a paradoxical creature as he is important in the myths of many native cultures. The central character of these stories, the Raven is considered the benevolent creator, filling the world with beauty and harmony, the master mind behind all that is good and looked upon with warm admiration. On the other hand, he is often viewed as a malevolent conniving, scheming trickster with self-gratification as his only goal. Including stories of the Raven eating the unsuspecting victim out of house and home or bidding someone to do his work, he is still the ultimate larger-than-life heroic figure within the myths. Whether it is creating animals or chasing down a woman to marry, one thing for sure, the Raven has left us with a rich and colorful history recorded in the myths and legends of the indigenous people. While the Raven appears throughout the world in mythology, our focus here will be centered on the Tlingit, Tsimshian, Haida, the Yupiit and Inupiat also known as the Eskimo, and the Athapascan Peoples of Alaska. What follows are 30 stories that seem to contradict each other adding to the confusion as to what or who this Raven really is. The cornerstone of this book is the Tlingit Creation Story which shows why the Raven is regarded as a grandfather to the people and is thought of with respect in asking for good health, good hunting, and for good fortune. It was the Raven that created man, the forest and the animals that inhabited them, the rivers and the fish that live in the water. In this context, the Raven is revered. However there are other stories that portray the Raven as a lazy scavenger, living off the hard work of others, or seeking sexual pleasure, the Raven is a shining example of how multi-faceted a myth can be.

What listeners say about Raven Tales

the tales are great

the tales in this book are told very good. some of the little details varried from my actual tribe stories but they did a wonderful job reiterating and weaving the stories together. I love this book and put it on for road trips with kids. we listen over and over. the next best thing to having an elder with us.

The raven stories are well written and the narration was strong. The narrator has a bit of an odd accent when he reads some of the stories, but I'm sure it's intentional. That took a little getting used to. I absolutely loved some of these stories and some were way too short. But I'm so glad I decided to buy and listen to this very inexpensive book. I started with books about Alaska and this was the 6th (another was by a Nunavut Inuit woman from Canada). I wish I had listened to this earlier; I think knowing about the mythology of people helps one understand them just a little more. I would recommend this as it's a quick read or listen and some of it will bring laughter. The narrator would be great reading kids' books I think