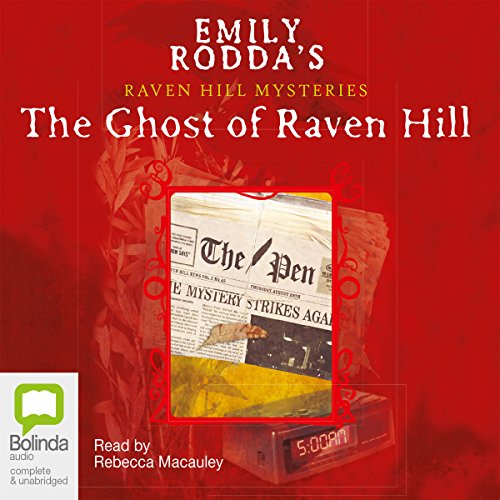 By: Emily Rodda
Narrated by: Rebecca Macauley
Try for £0.00

"Emily Rodda" is the penname of Australian author Jennifer Rowe, who has won numerous awards for her children's, middle grade, and young adult fiction. The Raven Hill Mysteries series was originally published as Teen Power Inc., a reference to the odd job agency that drives the risky adventures of the collection's six protagonists.

In The Ghost of Raven Hill, Rebecca Macauley's youthful and chipper voice captures Liz, the first narrator of the series, who serves as the creator and de facto leader of Teen Power Inc. Macauley has acted on the legendary Australian soap opera Neighbours, but she has also found an exemplary niche in performing children's literature.

Mystery and adventure are the last things Liz has in mind when she forms Teen Power Inc., Raven Hill High's own job agency. All she and her friends want to do is make some money, and they'll do just about anything. But mystery and adventure are both in store. They are soon confronted with a puzzle they just have to solve - with a little help from the Raven Hill ghost of course.
©2000 Emily Rodda (P)2002 Bolinda Publishing Pty Ltd

"A good, sound mystery story." ( Aussie Reviews)
"Narrator Rebecca Macauley is a master of voices, able to deepen and raise pitch remarkably as well as varying breathiness and tone to give a separate identity to each character." ( School Library Journal)

This was a very enjoyable book, had some twists and turns, some were predictable while there were a few that you didn't see coming.