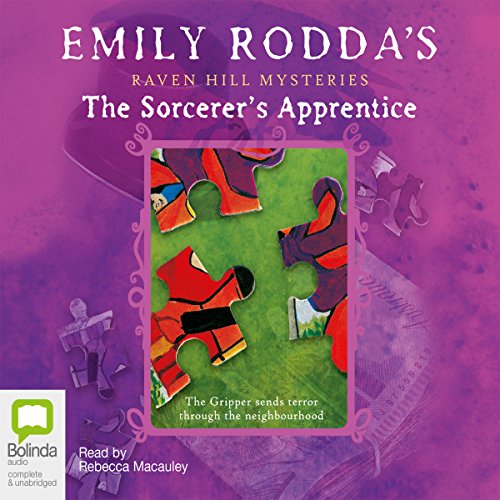 In the style of The Famous Five, the Raven Hill Mysteries involves a gang of friends who work together to solve mysteries with their detective skills. In this second installment, Tom takes the narrative reins to recount the Teen Power gang's latest adventure. The friends have been hired to clean up the local magic shop, and Tom is the only one who is excited. He loves magic and needs something to take his mind off the Gripper, a mugger who's been attacking people in Raven Hill at night. Narrator Rebecca Macauley performs with zest, her flexible voice drops to tense whispers and just as easily explodes into shouts of excitement and fear. Listeners are guaranteed boisterous fun with this audiobook.

From the internationally bestselling author of the Deltora Quest series.

Book 2 in the Raven Hill Mysteries series - involving detective work in the style of Secret Seven/i> or Famous Five: each book features a different character.

When the Teen Power gang is hired to clean up the local magic shop, Tom is the only one who is pleased. The others think the shop is creepy, and that its owner, magician Sid Foy, is weird. But Tom is looking forward to exploring the magic shop's secrets. He needs something to take his mind off his troubles, especially his fear of the Gripper - a vicious mugger prowling the streets of Raven Hill at night.

Emily Rodda has won the CBCA Book of the Year Award a record five times!

"Plenty of action, a touch of humor, and a smattering of clues to help would-be sleuths unravel the mystery." ( Aussie Reviews)