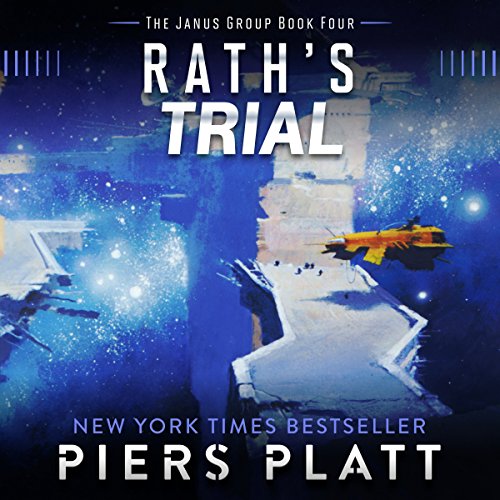 Rath thought that defeating the Janus Group and stealing back his hard-earned fortune might help ease his guilty conscience. But when he returns to the planet Scapa to find the woman he loves, his past crimes finally catch up to him. And the police aren't Rath's only concern: someone's put a price on his head. Rath will need to figure out who his new enemy is if he wants to stay alive. His old friend Beauceron can't help him - especially not when Rath's former colleague, Paisen Oryx, is the primary suspect in the detective's latest investigation. The three former allies each work to unravel the truth in a growing conspiracy, but will fate bring them together as friends or enemies?

Great continuation to the series. It takes an efficient step to the next book while weaving a wonderful story in this series.

Piers Platt is clearly establishing himself as a consistently solid author and brings us the first of three additional books in the Janus Group series. Our favorite characters are still going strong and we're invited to join Rath as he faces charges for his crimes and Payson as she does what she does best!

This legal thriller is set in the future and is Book 4 in a series. I have not listened to any of the prior three books, nor will I. The novel is interesting so I can well understand why many people love it. It is simply not for me.

Can't run from the past

Rath's Trial is the fourth installment in Piers Platt's Janus Group series (although the Janus group is now defunct). Rath returns to Scapa to attempt a reconciliation with his former girlfriend Jamie. Unbeknownst to him, a former client from Scapa, now making a play for Federacy power has been on the lookout for him in an attempt to eliminate Rath to avoid the possibility of exposure. An ensuing incident results in his capture and Rath is put on trial for his past assassination on Scapa. Meanwhile Pasien is organizing a group of former contractors as as espionage unit for the Senate intelligence committee. All the while, the territories are becoming restless and a new mystery player is coming back online. Finally, Dazi is having a rough time at the Interstellar Police Academy, but receives a gift from beyond the grave.

The sci-fi elements are in line with former volumes. The energy teleportation weapon is back in play. While the plot has definitely become more complex with multiple, independent players (although Rath always has a connection), the action remains crude and unsophisticated. There's quite a bit of pettiness all around and everyone seems to have caught Boursaran's "Boy Scout" virus with killing being frowned upon in all situations. Rath's prosecuting attorney is most annoying as she is totally focused on getting Rath the death penalty, but seems totally uninterested that the client that paid him for that murder is still walking free on Scapa.

The narration is a solid rendition with a good range of voices.

every book in this series is so exciting. there are so many twists and turns in the plot