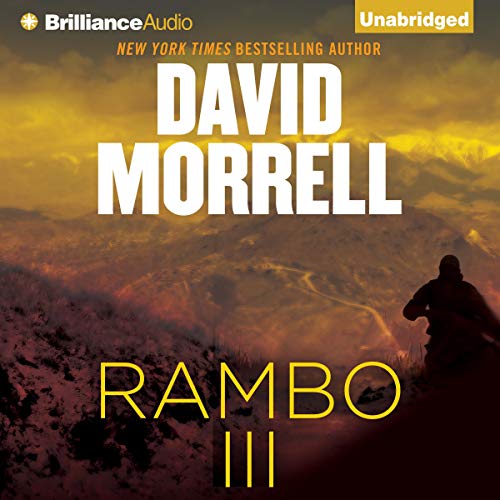 The most dangerous man in the world is back.

David Morrell's First Blood introduced Rambo, who joined the ranks of Sherlock Holmes, Tarzan, James Bond, and Harry Potter as an international thriller icon. In this further adventure, Rambo is in exile far from home in Thailand, vowing to renounce violence and war. When his country calls him once again, he refuses to accept. But then he learns that his former commanding officer, Colonel Trautman, the only man he trusts, has been captured by the Soviets on the Afghan border during a mission that Rambo rejected. For Rambo, it's a call to arms - and a mission back into hell. This novelization and the film have many differences. Listen to the story that the film could have had.

"Morrell, an absolute master of the thriller, plays by his own rules and leaves you dazzled."
--Dean Koontz, New York Times bestselling author of 77 Shadow Street

What listeners say about Rambo III

Loved this last book, thanks David Morell for creating the Rambo character, Eric G Dove did soooo well with the narration of this audio :)

better than the movie

If you like the movies check this out, builds out the character of much more and gives him more depth

This title was another novelization that came out after the film had, and the author made some changes that were subjectively improvements but more realistic at any rate. Still, I appreciated how the cinematic Rambo relied on his skills to infiltrate the Soviet base rather than insider knowledge. To his credit, David Morrell did well in developing the Russian and Afghan characters and had done considerable research on all subjects from archery to religion to military science. The literary Rambo makes an obvious allusion to the point that the filmmakers were trying to make, that is, if you want peace, you must prepare yourself for war. Buddhism is a pacifist religion that experienced pressure in Communist-controlled Vietnam and strong persecution in Taliban-held Afghanistan, so he says "What I want is peace." In the first book, Morrell used the metaphor of fishing to describe the protagonist-antagonist conflict as the surname Trautman confirms, but this book uses the metaphor of hunting and how the hunter can become the hunted. Lastly, the narrator does an astonishing job with the Afghan accent that validated the "accented" dialogue, and he and sounds as though he were struggling to carry a stretcher.

Can't lose with any Rambo adventure

David Morrell delivered the goods again. Can't wait to enjoy his other books. David's other series have great reviews also.

amazing, great book. love Rambo very entertaining .. on the edge of your seat. loved it

Great performance by the narrator and great story

What made the experience of listening to Rambo III the most enjoyable?

Rambo sounds just like he does in the movie, which I saw before I purchased and listened to the book. If you liked the film, you'll love this book as well. The only disappointment for me was the ending, otherwise a great and enjoyable listen.

What other book might you compare Rambo III to and why?

The other RAMBO books, apart from the first one, which was written in parts that distracted from the enjoyment of the first in the series.

What about Eric G. Dove’s performance did you like?

Mostly the realistic voices which Eric Dove did his best to make sound just like in the movies of the books which I saw first before listening to the books.

An action packed story with a fantastic actor - Sylvestor Stallone who in my opinion, was absolutely perfect for the part.

If you liked the film(s), you'll love the books. Highly recommended.