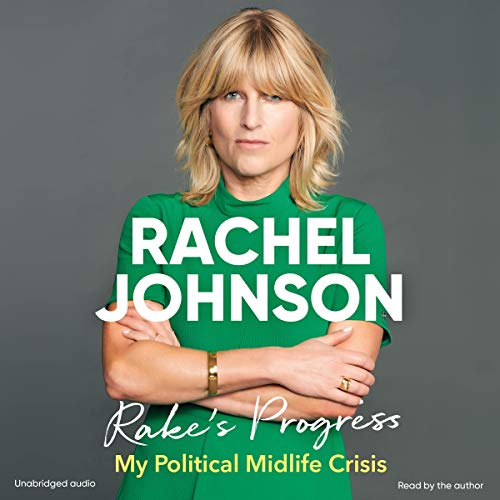 A unique, revealing and entertaining insight into the political dramas of recent times.

Rachel Johnson was born into what has been described by some as the UK’s most famous political family and by others as ‘Poundshop Kennedys’. She was always keen to avoid the family business at all costs and plough her own furrow as a broadcaster, novelist and journalist. But, after the referendum to leave the EU in 2016, she felt the heavy hand of fate. When an insurgent centre party burst onto the scene in 2019, she felt compelled to stand for something rather than nothing – which happened to be just as her own older brother, Boris, was making his final assault on Downing Street. As some joked, she went into politics to spend more time with her family.

Rake’s Progress tells the extraordinary story of what happened next. From long silences on the radio when asked tricky policy questions to loud curses from David Cameron during tennis matches, Rachel reveals all about her brief political career. Taking on Ann Widdecombe and the Brexit Party, would she and her party make history – or become a forgotten footnote in the rolling omnishambles of British politics?

Beyond her own story, Rake’s Progress highlights the importance of standing up for your beliefs and the challenges of life in the public eye and takes the listener behind the scenes, from the campaign trail to the ‘Westminster bubble’ and the carpeted corridors of power. Written with great honesty and self-deprecating humour, this is an audiobook that reveals the very human side of politics.

"Spectacular. The only honest thing I've ever come across about political campaigning." (P. J. O'Rourke)

"There will be weightier political tomes this year than Rake’s Progress, but you will not find one more entertaining." (Roger Alton, Daily Mail)

What listeners say about Rake's Progress

A hugely entertaining romp through a dismal period of history. Rachel J is a fine humourist, but gets in some enjoyable jabs at her great nemesis, Miss Widdecombe, and the grim figure of Chuka Umunna ... whose folly it was to hire RJ as lead candidate for Change UK in the first place. Despite her efforts to keep things soufflé light, there’s some real depth here too - genuine anger at the B****t debacle, and anguish at her beloved bro’s recklessness. Enjoyably indiscreet, and the description of Cameron’s tennis swearing is worth the price of admission alone. It’s pretty short, and the occasional fluff in reading was not remedied, but if you’re already inclined to like RJ then you’ll probably like this too.

Thrilled that Rachel read her story.

I loved this so much. Couldn't put it down. Such a self-deprecating, modest, fun and very clever woman. The end is fabulous. What Al said to her. Makes up for everything else he's ever done or said in haste. It's an important background to the logistics of the politial world and who it attracts into it.

Quite hastily dashed off in bits and of course Change UK (or whatever) is just a footnote in history and Brexit now seems dwarfed by Coronavirus, BUT this book was still good, funny in bits and quite sad in others, though not self-pitying. I just really enjoyed it. For people who like their political content human, ambiguous, grey-areaed and gossipy

A remarkable insight into the Johnson family, British Politics, especially the Change party.
At one stage, the European Election Campaign, I thought I was reading a Tom Sharpe novel. At another I had wondered if the only reason Rake had stood in that election was to write this book.
But her sincere belief that we're better in than out, won through.
I'd personally like to thank Rachel for her honesty and her passion. A remarkable book by a remarkable person.
Thankyou

Really enjoyed this well read,very funny and a great story.
look forward to reading other book by Rake.

How very down to Earth and normal she is.

I downloaded this after watching Rachel on Britain’s Best Home Cook (!) The book is a very honest record of her attempt to stop Brexit. Will look for more of her stuff.

I really enjoyed this book. As always, Rachel is funny, articulate and very engaging. I really liked her anecdotes about her childhood. As always, she is polite and pleasant about people who have clearly been less than friendly towards her (Ann Widdecombe).
This is definitely worthy of a listen, regardless of where your politics lie.

I couldn’t stop listening to this. The author reads with warmth and vigour and is an excellent story teller. Loads of amusing moments during a tale of losers and winners It’s certainly worth listening to from start to finish. Rachel tells it as it is ..

Wanted to enjoy this, but couldn't. Seems detached from general everyday life? Not sure 🤔

Jumping on a sinking ship

"If I hadn't been born, Boris would never have been Prime Minister," Rachel Johnson claims in this gutsy, guileless account of her lamentable failure to stand as an MEP candidate for the new-born pro-Remain Change UK party which was doomed to ignominious failure despite the Herculean efforts of its dis-organised members to keep it going. Rachel (Rake to her family & hence the book's witty title) was, as she quipped catastrophically in a Times interview, the rat that jumped ONTO the sinking ship. The gargantuan human effort, time and money poured into the run-up to the ultimate failure of Change UK is detailed at breathless speed as Rachel whizzes between London and the West Country.

Yes, Boris probably wouldn't have been PM if he hadn't had his little sister only 15 months younger than he was, fiercely clever, tough, determined, ambitious, savagely competitive snapping at his heels. No wonder as a child Boris said he was going to be 'king of the world'. The book is fascinating in its absolute honesty as Rachel's faults and shortcomings are ruthlessly laid bare. Her rapier-sharp facts and opinions about people are deliciously indiscreet. Her arch Brexit enemy outspoken Ann Widdicombe probably loathes Rachel as much as Rachel loathes Ann; Meghan Markle's ordered home birth ended up as a Medivac to hospital; Rachel's friend and foul-mouthed tennis partner David Cameron is described in print as an 'egg-faced c***'.

Rachel's fierce love for Boris is obvious, even though she is sick of always being called Boris's sister, and the soreness of her star sinking as his was rising astronomically must have been extremely galling. What I found most interesting was the family background - her mother who sat her finals pregnant with her first child, an artist who displays paintings of herself and Rachel's stepfather on the walls, and above all her father Stanley (currently seemingly on every celebrity show there is) who has achieved the life he never had through his eldest son. Rachel admits to the Oedipal in this, and you can't help feeling sorry for the man for whom his son's Brexit is viscerally against all that he holds dear. Rachel ponders whether Johnson family Christmas dinner can happen again.

There's no denying Rachel's phenomenal powerful cleverness. Her writrng is crisp and witty filled with literary and cultural allusions, inventive metaphors and similes and laugh-aloud playing with words - the 'poo-nami' which is baby-care, and the 'catastrof***' which is Change UK's trajectory. You may lose patience with Rachel at times - having been criticised for having two Agas, she justifies it by saying that she has two houses! But you have to admire her. It takes guts and commitment to fight a public battle you know you'll lose - and it all makes great listening.