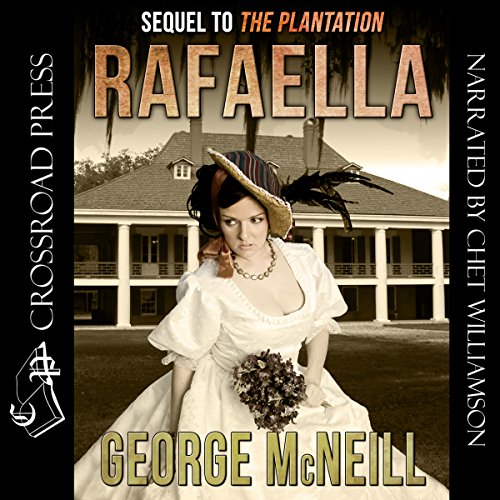 By: George McNeill
Narrated by: Chet Williamson
Try for £0.00

They lived in a world of secret guilts.

Rafaella: At 17 she had a beauty that could possess and destroy. No man was safe from her, not even her father.

Wyman: He would do anything to gain Rafaella's favor. His pursuit of love would lead to disaster.

Lawton: He knew the secret of Rafaella's past - a secret his lust would never let him reveal.

What listeners say about Rafaella

I had to stop listening to this story a few times. There are some graphic scenes and unnatural scenarios that take you into Rafaella's inner thoughts as she slides into madness. The story is a bit over the top.

The author repeats things from the previous book WAAAY too much, and repeats events in this book over and again, like the reader is too stupid to follow the story. the end was completely unsatisfying. The main character is dead, nothing is ever said about what happens to the rest of his family in the story. there's no mention of what happens to the main character's first love from the first book and their illegitimate son, in the end. Shortly before the end of the book, he offered to care for the boy, send him to school, provide for him, etc but then there's no mention of that in the end. I could see if there was a 3rd book in the series where these loose ends are tied up and new stories evolve, but the book was written in the 70s and there's no third book. what a waste of time and money. I'm requesting a refund.

Horrible end to a great trilogy!

The first 2 books I loved! This one, SMH! Oh where should I start?! Now it would have been an okay book if the author had used someone else for the narrator, I wanted to break my phone every time he voiced Rafaella! I liked some parts of the story but thought some parts were not very well thought out. It was very disappointing based on how good the first 2 books were.

This book picks up where the first leaves off and has pretty much the same pros and cons. Great story, excellent writing and extremely well narrated. But also very offensive language, and taboo gratuitous sex.

Would you listen to Rafaella again? Why?

No I would not

Have you listened to any of Chet Williamson’s other performances before? How does this one compare?

Who was the most memorable character of Rafaella and why?

Rafaella she is NOT the sounth

I just do not like the story, just to sick.