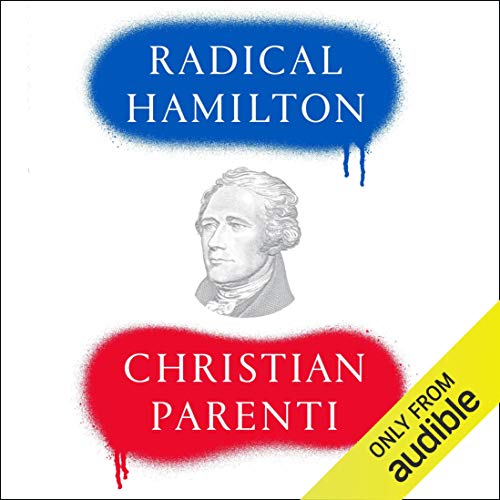 By: Christian Parenti
Narrated by: Jason Culp
Try for £0.00

A dramatic reevaluation of the founding of the United States and the history of capitalism.

In retelling the story of the radical Alexander Hamilton, Parenti rewrites the history of early America and global economic history writ large. For much of the 20th century, Hamilton - sometimes seen as the bad boy of the founding fathers or portrayed as the patron saint of bankers - was out of fashion. In contrast his rival Thomas Jefferson, the patrician democrat and slave owner who feared government overreach, was claimed by all. But more recently, Hamilton has become a subject of serious interest again.

He was a contradictory mix: a tough soldier, austere workaholic, exacting bureaucrat, yet also a sexual libertine and a glory-obsessed romantic with suicidal tendencies. As Parenti argues, we have yet to fully appreciate Hamilton as the primary architect of American capitalism and the developmental state. In exploring his life and work, Parenti rediscovers this gadfly as a path breaking political thinker and institution builder. In this vivid historical portrait, Hamilton emerges as a singularly important historical figure: a thinker and politico who laid the foundation for America's ascent to global supremacy - for better or worse.

What listeners say about Radical Hamilton

Fantastic reinterpretation of the American Rev

This is a fluid, highly readable narrative and analytic history that manages to break new ground in the interpretation of the American Revolution and the Industrial Revolution. Very well written and (re the audiobook) nicely read, although I did turn up the speed to 1.25x and sometimes 1.5x. In this book you get a sweeping overview of the long arc of the American Revolution that also drills down on key historical junctures in novel ways. My favorite parts were those dealing with: the economics of the wartime supply effort; the political and military crises of the war and how those drove a transformation in Hamilton’s thinking; the economic and environmental portrait of the Critical Period – that is the great depression of the 1780s; and the reinterpretation of the US Constitution as an economic document sketching the outline of the modern “developmentalist state.” This is bracing stuff and totally original. The take away is that Hamilton was not a free marketeer but rather was very much a champion of government planning and government led economic transformation. This upends the typical understanding of the relationship between government and the private sector. The author argues that modern industrial capitalism is, believe it or not, as much the product of “socialistic” state planning as it is of entrepreneurial innovation and risk taking. It’s counterintuitive but he makes a very convincing case and does so while telling a gripping tale of swashbuckling adventure, constant crisis, and barely avoided disasters.

Listen to or read this book!

Regardless of whether your politics lean to the right or left, this book will challenge what you took for granted about Alexander Hamilton

Parenti offers a fresh perspective on Hamilton and the importance of his Report on the Subject of Manufactures, under-appreciated in America, and demonstrates that central planning was a key element of the US’s rise to global power.

Parenti brings exacting, well-documented academic research to bear on a complex topic and presents it in a journalistic, engaging style. It offers a salutary antidote to the obscurantist jargon salad one finds in so much academic writing. A book on such an apparently dry topic shouldn’t be so engaging, but it is.