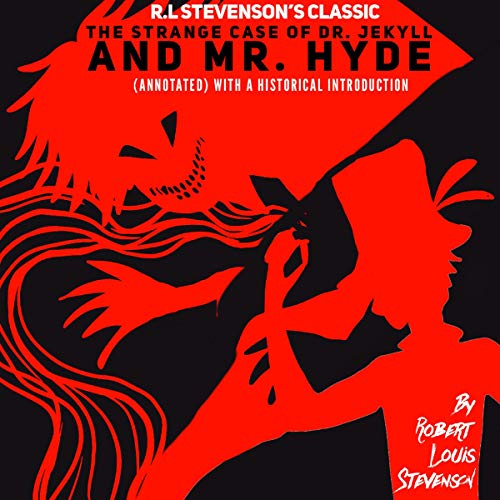 By: Robert Louis Stevenson
Narrated by: Karen Allen
Try for £0.00

Unique to this title is:

You may, of course, skip all of it and go straight to the main title if you do not want any spoilers and come back later to the beginning.

Robert Louis Stevenson, Scottish essayist, poet, and author of fiction and travel books was born in 1850 in Edinburgh, Scotland, as an only son of a prosperous civil engineer. He entered the University of Edinburgh at the age of 17 and studied to be an engineer to follow his father in the family business, however, he soon realized that he was not cut out for that profession. His father agreed to let him study law instead and although Stevenson graduated from the law school, he never practiced law because, by then, he knew he wanted to be a writer.

He started writing in his teens, and when he was 16, he wrote "The Pentland Rising", a story based on a historical event, and his father paid for 100 copies to be printed in pamphlet form. He published his first book at the age of 28.

Stevenson enjoyed adventure and used every opportunity to travel and that reflects in his fiction. Unfortunately, the main reason he spent a lot of time abroad was his poor health.

The novel revolves around an investigation carried out by a London lawyer Gabriel John Utterson concerning the strange relationship between his client - Dr. Jekyll - and Mr. Hyde. The novella had a huge impact on modern culture, so much so, that the phrase “Jekyll and Hyde” became a common way of describing someone's dual nature.

What listeners say about R.L. Stevenson's Classic: The Strange Case of Dr. Jekyll and Mr. Hyde

I suggest skipping these until you listen to the story. Then going back to these if you are interested in them. I learned from a past audiobook that these introductions and overviews could give away some of what happens in the story.

Dr. Jekyll is a brilliant man who is trying to understand the human psyche and used himself for his experiments. Unfortunately, things do not go well and he has unleashed his evil side, Mr. Hyde.

”It came about that Edward Hyde was so much smaller, slighter, and younger than Henry Jekyll. Even as good shone upon the countenance of the one, evil was written broadly and plainly on the face of the other. Evil besides (which I must still believe to be the lethal side of man) had left on that body an imprint of deformity and decay. And yet when I looked upon that ugly idol in the glass, I was conscious of no repugnance rather of a leap of welcome. This too, was myself.”

It has been years since I read this book so I was excited to get the audiobook and see if it was as good as I remembered. It was. I enjoyed this horror story (more than my last horror classic) and will most likely listen to it again in the future.

If you are looking for a horror, or a classic to read/listen to I suggest picking up this one.

*Audiobook provided for free for an honest review by Audiobook Boom.*

It's been years since I've read the story, so I was excited to see an audio version to listen to. Listening to the story I found it a bit convoluted at times, but the overall story is a very interesting one and a great commentary on human nature. I enjoyed the audio version and thought the reader did a great job performing the story. Her voice was pleasant and easy to listen to. She used inflection in all the right places and spoke at a good speed. I was given this free review copy audiobook at my request and voluntarily left this unbiased review.

Into is great, narration fairly good

This is the second book I’ve read/listened to by this author and Second audio rendition of this book. I like the historical intro and overview given at the beginning of this rendition. I think it adds to the overall audiobook experience.

This is the first book I’ve listened to by this narrator ( Karen Allen ) and I would listen to another. She narrated this like retelling a story, not just reading one, except she had subtle variation in character voices. Her tone is pleasant.

I really liked that this had a historical introduction about the Author. It gave more meaning to listening to the story. This is the first time I’ve heard this story. I knew of it through television but not by the book itself. The narration was easily heard and understood and the narrator’s accent helped with the depiction of the story she did a great job of narrating the different characters. It was a short and easy listen. I would recommend this story to fans of the Author and the classics. Just the historical introduction itself was an added bonus. I would listen to this story again. I was gifted a preview copy of this audiobook and downloaded it and I am voluntarily leaving my own opinion in this review.

This is a wonderful telling of this classic, and the historical forward was informative and interesting. I received a free review copy of this audio book in exchange for an honest review.