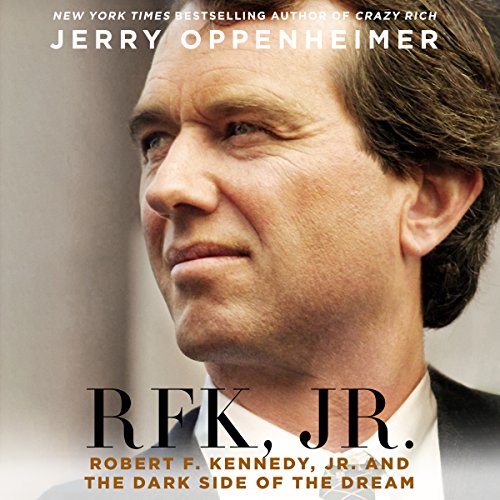 By: Jerry Oppenheimer
Narrated by: Holter Graham
Try for £0.00

From New York Times best-selling author Jerry Oppenheimer comes a sensational biography of the son of the legendary senator and troubled standard bearer of America's most fabled political dynasty. Robert F. Kennedy, Jr., inherited his assassinated father's piercing blue eyes and Brahmin style, earning a reputation as the nation's foremost environmental activist and lawyer - the "toxic avenger" - battling corporate polluters. But in this, the most revelatory portrait ever of a Kennedy, Oppenheimer places Bobby, Jr., leader of the third generation of America's royal family, under a journalistic microscope. Based on scores of exclusive, candid on-the-record interviews, public and private records, and correspondence, Jerry Oppenheimer paints a balanced, objective portrait of this virtually unaccounted-for scion of the Kennedy dynasty. Like his slain father, the iconic senator and presidential hopeful, RFK, Jr., was destined for political greatness. Why it never happened is revealed in this first-ever biography of him.

What listeners say about RFK Jr.

a most unprepossessing biography subject

Much is made of the opportunities and adoration which the Kennedy family enjoy (or are subjected to) simply because of who they are. The same holds true for this book - it is unlikely to have been written if the subject had been an everyday Joe Blow. Some sympathy must attach to RFK Jr for the extraordinary series of tragedies which have blighted his life and family, and his genetic inheritance boded ill from the start, but I just found 'Bobby' to be a big bore. The author has put it together in a readable somewhat gossipy style, and the narrator does a fine job with the material, but from about the halfway point I was looking forward to the end. Sex, drugs, and irresponsible behaviour, even when attached to a famous name, are not enough to carry a full-length biography.

This is a snarky, lightweight author who can't even get the date of JFK's assassination right. One crumb of gossip after another. Poorly researched and dependent on rumor and hearsay. He is also clearly biased against gays.
The narrator is also sarcastic and no fun to hear. Not even one star! I returned it.

Confirmation of an adult spoiled brat!

Tells what everyone knows but is afraid to say out loud due to the "Kennedy repercussions". Entitled from birth, raised to be a selfish, self serving spoiled adult leave a trail of destruction everywhere he goes and sees nothing wrong.

Would you recommend RFK Jr. to your friends? Why or why not?

I would but why spend money to confirm what you already know?

I liked it. Tried to represent the book accurately.

This book is awful!

This book is gigantic waste of time. Poorly written, all gossip and innuendo...save your money!

This book seems to be a paid-for bashing of a human being with inhuman descriptions which resemble Nixonian campaign tactics. The accusations, mostly without source credits are only as bad as the endless innuendos which portray Robert F. Kennedy, Jr. as being, literally a dirty, person, on drugs and hardly worthy of recognition. The fact is that RFK Jr. may have had some issues but they were surmounted and the man is doing valiant work against some of the most abusive corporations on the planet. How Jerry Oppenheimer has avoided a fat law suit for defamation of character is a mystery to me. RFK, Jr. is embattled with some very large and dangerous groups, who would think of nothing to drop a low 6-figure sum to get a book published to demean Bobby, Jr. I have never read a book with so little redeeming aspects as this one. Don't bother unless you are predisposed to hate members of the Kennedy family, for, in that case, this book will leave you thrilled with prejudices validated, albeit without documentation.

Many people believe that only the top tier Kennedys are fascinating: JFK, Jackie, John, Jr., etc., but the author, who wrote a shocking 1993 bio of Robert F. Kennedy Jr.'s mother Ethel, obviously picked up where he left off and decided to profile the most charismatic, talented, and intellectually gifted of the famous widow's eleven children. Oppenheimer paints a proverbial warts-and-all portrait of the second son of the brood, noting Bob's positive attributes, but detailing much more of the negative ones, mainly his arrogance, which nearly all of the Kennedys seem to possess to a certain degree. Like most of the clan, Robert Junior has a fast reputation and an extremely strong sense of entitlement. He would make a better politician than his brother Joe, but there would be a tremendous price to pay for seeking high office.

Not worth ur time

The author seemed to have a vendetta out for Robert Kennedy Jr. I really love the work RFK Jr is involved in, this book seemed to only paint a negative view of his life.

Also, the narrator trying to talk like a Kennedy was poor taste!

You need a high tolerance for this one.

I felt like I needed a shower half way through this book. Nothing to be gained by this story. Not even a cautionary tale. Just a trash heap of a train wreck of a life.

Very well written and well researched biography. Unfortunately, the subject is a very uninteresting and uncompelling fellow, who really didn't merit an entire book devoted to him.