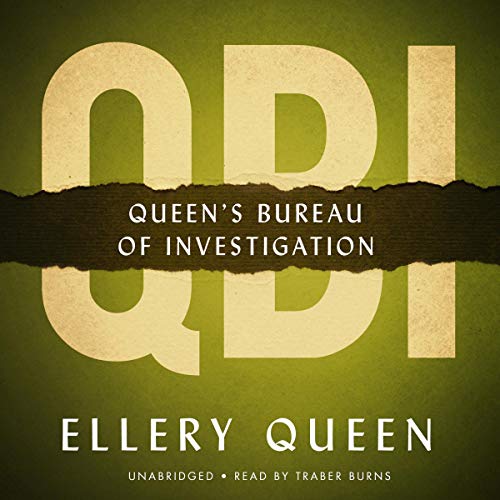 Queen's Bureau of Investigation is now open for business - and in each department of this new enterprise, Ellery finds ample opportunity to exercise the brilliant, ingenious, and at times startling talents of his crime-lab mind. For to the bureau come some of the most plaguey cases in Queen's career.

In "The Three Widows", two of Theodore Hood's wealthy widow daughters, as well as his own widow, are caught in a murder that Ellery reluctantly relegated to the Impossible Crime Department. In "The Myna Birds", old Mrs. Andrus' bequest of a million dollars to 38 observant and talkative birds sets off a chain of violent events leading straight to the Embezzlement Department - and the only bird detective on record! "A Question of Honor" is a matter of considerable international delicacy, involving indiscreet letters, a Shakespearean scholar from Scotland Yard, and a crime at once assigned to the Suicide Department.

Numerous other criminals, crimes, follies, and felonies find their way to the bailiwicks of the QBI as well. From the files of the Buried Treasure Department comes "Miser's Gold"; from the Narcotics Department, "The Black Ledger"; from the Kidnapping Department, "Child Missing!"; and many others. In each case, Ellery Queen demonstrates the powers that make him unique among detectives.

What listeners say about QBI

I find that I sometimes like these short stories and novelettes better than the novels. These two writers were imaginative and constant in their quality and inventiveness. No one like them around these days it seems. Too bad.

These are little puzzlers, and no attempt is made at making them 'fair play' mysteries. They are so quick they tend to blur, with just the barest nod to anything but using the skeletal story. Yet they are just right for walking the dog or running an errand

The stories were typical Ellery Queen tales of deductions. There were two Wrightsville stories For fans but there were no special stories that stood out to make this a must have set.

Ellery is a good writer too

I had forgotten that Ellery is a talented wordsmith and efficient plotter. Sometimes his sentences are long but as often he turns a clever phrase. This is classic literature.