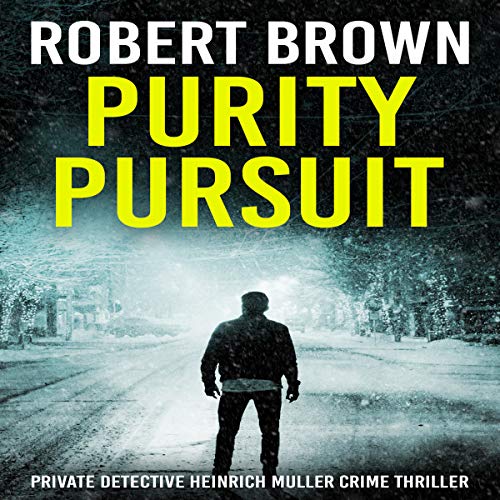 Following on from the success of “Deadly Illusions” Robert Brown returns with his second book “Purity Pursuit”.

Heinrich Müller did not like the sound of this assignment. The widow sitting in front of him, with her frail voice scratchy and warbling as if it came from an old 78 record, was telling him the most remarkable things, none of them good.

Heinrich Muller is a private detective with a past he’d rather forget. When he is asked to investigate the murder of an antiques dealer with a history of dealing Nazi memorabilia it opens a case that is as personal as it is professional.

Muller’s investigations soon take him to Europe, where he chases down dealers in Nazi memorabilia and comes up against Europe’s far-right parties. He soon uncovers a plot to find the missing gold train. Teaming up with him is a beautiful Polish civil rights campaigner and a troubled teen boy Muller tries to pull away from the influence of a neo-Nazi militia.

Can Heinrich get to the bottom of this case or will he succumb to the overwhelming pressure.?

Robert Browns second book is a master class in thrilling suspense that will sure to excite the fans of his first novel Deadly Illusions. If you love fast paced thrillers, then Purity Pursuit will not disappoint.

This was my first listen to a Robert Brown book, and I can confidently say that it won't be my last.
Purity Pursuit is a gritty fast paced thriller, with our reluctant PI Heinrich Muller on the trail of some of Europe's most fierce far right groups, whilst investigating the murder of an antiques dealer specialising in Nazi memorabilia.
The case soon takes a personal twist, and it soon becomes evident that the search is on for the missing Nazi gold train.
Very well narrated by Josh Horowitz. Very accomplished differentiation between characters, and some good special effects.
Recommended..

I received this copy for free, in return for an honest review.

This is the first novel by Robert Brown that I have encountered, and also the first one narrated by Josh Horowitz. Brilliant for both.

Lost treasure was the temptation to read and then I was amazed at how involved I personally got about the militant social groups encountered in the story. So true of the present day social problems. Girl interest included but didn't get too involved, and the good guy didnt end up with the girl. A positive future for the teenager was good, and I just had to laugh out loud about Heinrich's visit to the bathroom at the end - silly, but good retaliation!!
I'll look out for further books by this author.

Josh Horowitz's narration was top class. His characterisation was very good, and the electronic disguise of his Eritraen (? Spelling, sorry) friend's voice was fitted in very well. I'll certainly look out for more books narrated by him. I

A great adventure that’s left me waiting for more. Well paced, well written with enough action and sass to keep you interested the whole way through!
Can’t fault the narrator at all, he clearly defines each character, leaving no confusion as to who’s who and am looking forward to hearing more from both Robert and Josh! I especially like the use of sound effects when having phone conversations etc, very well done!
This is an honest review of a free review copy

A wise book with a great performance

A very wise and impressive book that managed to open my eyes. The author is a very smart man and I will be interested in reading more of his books.
The performance of Josh Horowitz was so impressive that I felt that I was totally transformed into that time. He is very versatile with his ability to demonstrate various ages and genders.


I think, I will read this book again and again.

Thank you very much to the author and the book’s narrator.

delving into the dark side of neo-Nazi militia...

Private detective, Heinrich Muller, is hired by the widow of an antiques dealer to investigate her husband's murder. This dealer worked with Nazi memorabilia. Heinrich travels to Europe and, when he learns that his client's husband may have uncovered a lost Nazi train, goes undercover and is pulled into the dark side of neo-Nazi militia, aka the Purity League. Heinrich's 'credentials' is a past that he'd rather forget...his grandfather was a Nazi officer. With the aid of a Polish civil rights leader and a disillusioned teen boy, Heinrich races to solve the mystery and stay alive. This is a fast paced, action packed story with some humorous moments. Excellent narration that pulled you into the characters, and great ending. This is a new-to-me author, as well as narrator, and will definitely look for more of their work.
I voluntarily accepted a complimentary copy of this book in exchange for an unbiased review.

I enjoyed the book. Heinrich felt a bit preachy about things at times but I get he's a complex guy with a complex past. Maybe in the future he will just live and let live. But Josh the narrarator I really did enjoy and elevated the story on Audible.

Loved this fast-moving investigation and the narration really drew me in to the story! Will be looking out for more books by Robert Brown and definitely more stories narrated by Josh Horowitz!

Just how anachronistic is a curmudgeony, pugilist PI in today's gentrified, iPhone-in-hand, hipster-dominated, Starbucks-WiFi-everywhere New York? It turns out, not very anachronistic after all. Part Sam Spade, part Indiana Jones, Heinrich is a rough-around-the-edges (must be a Gen Xer) linguistically adept PI hired for a murder case that puts him on the track of the mystery of a missing Nazi train loaded with 50 million dollars of gold. But the Neo Nazi groups that he's infiltrated have plans of their own. Can Heinrich get the gold before they can? Beautifully narrated by Josh Horowitz.

I didn't care for the main character's attitude

Ok, so, I have a confession to make. I didn't finish the book.
I understand the attitude of nazi and the attitude that comes with facing that life. I understand if you have history with that life, you are going to be angry and unyielding. However, to just be an ass because you can...because someone is new in your gym, because you feel you are better and then talk so much trash...well...in real life, I would walk away from that kind of attitude. So, therefore, I walked away from this book.
The audiobook narrator was very good. I enjoyed the timber of his voice and the cadence of his story telling. I just didn't finish it.

I very much enjoyed the story and the narration of this book. this is a new author to me and a new narrator so I will definitely be looking for books by both of them.
Muller, who is not proud of his Nazi history, finds himself on the trail of Nazi relics. along the way he meets many dangerous people that threaten his life and the lives of his Newfound friends. the story is just over 4 hours which makes it a nice listen for shorter commute( I get to listen about a half hour a day} or a day trip.

Excellent story that only takes a few hours!

A private detective was hired by a widow of an antique dealer to investigate his murder. The detective didn’t want to take the case because he didn’t want to get involved with Neo-Nazis. Then a large fee made him change his mind. Now the adventure starts....

This was my first listen/read from this author and it was an ok listen. It was fast paced and fun, but the characters didn’t draw me in as much as I would have liked.