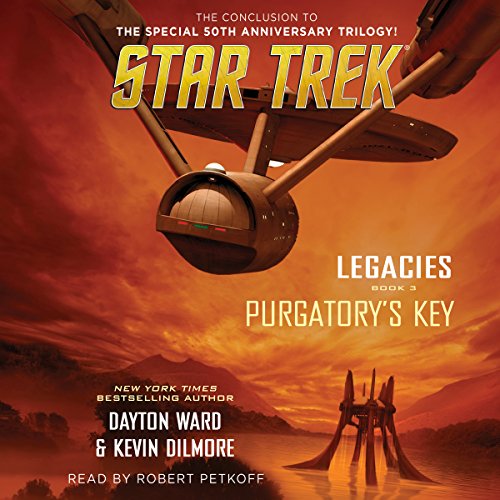 By: Dayton Ward,Kevin Dilmore
Narrated by: Robert Petkoff
Try for £0.00

Eighteen years ago the Starship Enterprise thwarted an alien invasion from another universe, and Captain Robert April took possession of the interdimensional transfer device that made it possible. Since then each captain of the Enterprise, from Christopher Pike to James T. Kirk, has guarded this secret with his life.

Now Romulan agents have succeeded in stealing the device and are using it to banish Ambassador Sarek and Councillor Gorkon to an unknown realm in the midst of their groundbreaking Federation-Klingon peace negotiations. With time running out as interstellar war looms in one universe - and alien forces marshal in another - will Captain Kirk and his crew preserve the tenuous peace and reclaim the key between the dimensions?

What listeners say about Purgatory's Key

Ok, not great but good conclusion

The awkwardness and forced natured of the ‘hit’/‘ze’ supposed gender neutrality is distracting. This third part also suffered from numerous skips in playback and skips in the sound. The narrator’s attempts at different voices is ok but sometimes it is hard to tell them apart.

A good story - I've listened to all 3 parts now and have to say that although the narration is pretty good overall, I found myself becoming more and more irritated by his constant inability to pronounce the word 'her', whenever referring to any female in the story.
The narrators accent sounds quite American - quite normal.
So WHY does he always say HEAR, or HERE (Same pronunciation.) instead of HER.

Once noticed, you can't fail to HEAR it...

a real pleasure to listen to. can't wait to start the next one. Thank you

I love this in depth adventure into the unknown!

I would recommend it to trekies and non-trekies alike. great ending to the trilogy. enjoy

sometimes you can read or listen to a Star Trek book and think, "is that it", but not this one, i enjoyed it throughly ....
and you have the rare joy of it being unabridged ....... i wont give away any plot twists, but surfice to say its well worth getting ...... 😎

Loved this story. The story was great. It kept me company on my long trips.

Weakest of the trilogy, still good

Robert petkoff's ability to mimic the voices from the original series is spot on. This story is typical Star Trek: great if you're in to it, otherwise a bit cliché. However, it IS pure escapism and the reading is engaging; it's easy to lose oneself for a number of hours without needing to pay close attention.

This the third and final book was just as good. And I still could not see how this would end.
Think I listen to it again 9/10

The other two novels in the series were great, this is slow and ponderous and way too long.

I am halfway through and I have given up.

Good narrator, interesting story, terrible dialogue. I heard they wrote these books on a very tight deadline. It shows.

Great ending to the trilogy

I enjoyed all three books of this series. The third was better than the second but not as good as the first.

Book three ties up everything nicely. Moves along a little faster than the second. It’s worth a listen if you are a fan. Robert P does a stellar job as always. He helps put you in the setting.

The last book in the series was

the best! The journey of the Enterprise is never easy. The third and final chapter is the conclusion of an 18 year secret that previous captain's of the Enterprise knew. Robert Petkoff the narrator performance of all the characters on the Enterprise was excellent. Read all 3 books and enjoy the journey.

Not as good as book 1, better than book 2

Everything is relative, and while none of the books in the series were great, this one was much better than the second. I listened to it only for closure and my expectations weren't high going in.

Overall, I think only a Star Trek fan could tolerate it, though they might cry at the illogical storylines.

Where does Purgatory's Key rank among all the audiobooks you’ve listened to so far?

I'll compare to book 1 and 2 of this series: book 3 is easily the weakest of the 3. It's mildly entertaining, but felt like a regurgitation of the first two books. Some good action here and there, decent interactions among the characters, but overall the book only served to conclude the overall story arc. With some editing, books 2 and 3 could easily have been combined.

If you’ve listened to books by Dayton Ward and Kevin Dilmore before, how does this one compare?

This is my first by the authors.

Which character – as performed by Robert Petkoff – was your favorite?

In book 3, I enjoyed his Checkov performance.

No. It started off strong, but it felt like work about a quarter into the book.

As a fan of the original Star Trek TV series it was just okay overall and I struggled to listen to it all the way through. (The first book in the series was really good, the second is the same as the third.) The story is okay, but you have to be fan to really like it. Robert Petkoff's performance is the best part. He has each Star Trek character down and is near spot-on with the accents. I would only recommend this book to Star Trek fans.

The best was the little bit of time spent with the original series crew. The least was all the time spent away from the crew.

Would you recommend Purgatory's Key to your friends? Why or why not?

no, I don't think so

There is no way this is ever going to be made into a movie so, no.

Disappointing part 2 of a 3 part series.

If you read the first two, you sort of have to read the third. As a lifelong Trekkie I can deal with some disappointment. Overall, the end story-line was entirely predictable and boring. The character interactions are the the only highlight. I suppose if you have come this far with book 2 then completing the series is not a total waste of money, after all its still Star Trek!