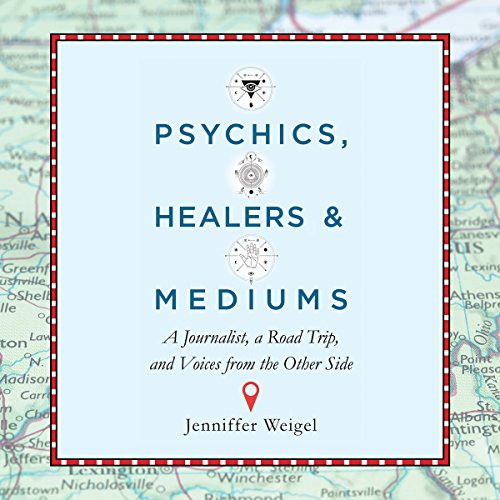 Since the dawn of time, people have been fascinated by those who claim to have extraordinary psychic abilities. The fascination has reached a fever pitch with the rise of modern media.

It is safe to say that many of these folks are either extraordinary frauds or extraordinarily deluded. But could some of them be legitimate? Do some people actually possess psychic gifts that can be used to help and heal?

For 20 years Emmy Award-winning journalist Jenniffer Weigel has been interviewing and investigating mediums, psychics, and healers. She became particularly interested in this topic after the death of her father in 2001. "I felt that as a journalist, it was my duty to go behind the scenes with these people who claim they can talk to dead people or heal the sick and really pull the curtain back on these so-called gifts."

Not a psychic junkie already? You will be!

I loved this so much! Jennifer’s experience as a professional storyteller is what makes this such a sparkling listen. She understands setting, tone, expectation (and humor) and puts all of this into the story—and her narration. I grew up in a very intuitive household so I knew a lot of the people she wrote about, but a couple were new to me and I was thrilled to have new people to research. My only criticism is her use of repetiton to drive a key point home...we know, we get it, not everyone is so dense or linear that we can’t reach meaningful conclusions on our own. But, this is a forgivable tactic as the stories are so great!

I enjoyed this book a lot. Jenniffer Weigel's delivery of the content was a solid match for her writing--lively, friendly, down-to-earth, and engaging. This book offers a good introduction to the world of mediumship--the variety of ways psychic and mediumship abilities manifest in different gifted individuals, how these abilities can offer healing to people, as well as a nice introduction to some of the more well-known mediums on the circuit, for those who might like to attend one of their gatherings/events or read their writings. Weigel is successful in her efforts to capture each of her interviewees' personalities as she relates their interviews. When I bought this title I misunderstood and thought it was basically a series of podcasts, where I'd hear the voices of each medium or psychic she interviewed. This was not the case. She interviewed them, wrote a book relating those interviews--along with her own thoughts and connections to the content--and then read the book aloud. Though it wasn't what I expected, I wasn't disappointed either. I especially appreciated her efforts to bring along neutral or even skeptical parties unknown to the people she interviewed to see what would transpire. All of the mediums and psychics interviewed were impressive indeed. I would definitely read more of Weigel's books.

When I was young I had some experiences, and still do, as I did on election day... I saw my dad, who passed away, once when I was hospitalized, but never knew what this was. I was on vacation, we put the tv on for our dog if we leave him alone, and saw an episode of the Dead Files. After that, I knew I had to learn more. This book is a great introduction, and Jennifer is definitely doing what she is supposed to do, wake us Light Workers up!
Thank you Jennifer, know you have made a difference! I love you!

Great read for those interested in the other side or grieving looking for answers. I lost my 17 year old son to suicide I'm March, 2016. I feel like he is always sending me messages to be happy, gather myself and get back to myself while reaching out to others grieving loss. This book gave me comfort and confirmation. Thank you to the author for taking the time to do this research. It's so helpful for the bereaved.

Amazing book for mind the heart and spirit

I do not have any special gifts but I believe in those who do. This book was brilliantly written and narrated by Jennifer. She is witty & professional. The book is easy to listen to, the interviews & stories are amazing. I even found it to be inspirational and educational!

I love this book💜

You won't regret getting this book💜 Love how real she. I would definitely listen to it again.

Loved listening to Jenn! This was my favorite book so far! She had many of the same questions I did.

This book gave me a stronger understanding and healing of some experiences I have had with mediums. I would definitely recommend to anyone wanting to know and understand more.

This book has helped me in so many ways. The words were spot on with everything. The author is the narrator. She’s amazing. I’m thankful for her and this book

I came to this book at just the right time. I laughed cried and found myself deep in thought as the words resonated with my younger self who has been locked away. Thank you Ms. Weigel.