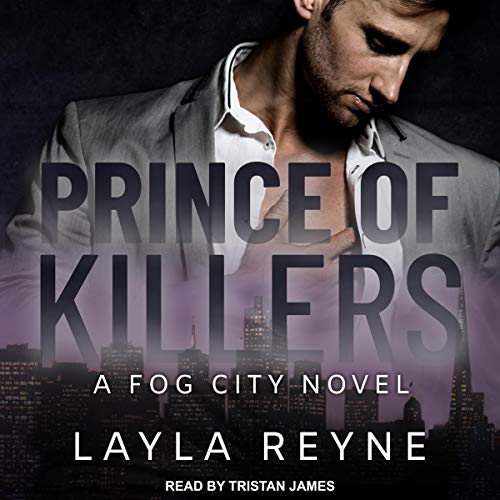 By: Layla Reyne
Narrated by: Tristan James
Try for £0.00

No indiscriminate killing. No collateral damage. No unvetted targets.

These are the rules Hawes Madigan lives by. Rules that make being Fog City's Prince of Killers bearable. Soon, he'll be king - of an organization of assassins - and the crown has never felt heavier. Until the mysterious Dante Perry swaggers into his life.

Dante looks like a rock god and carries himself like one, too, all loose-limbed and casually confident. He also carries a concealed weapon, a private investigator's license, and a message for the prince. Someone inside Hawes' organization is out to kill the future king.

In the chaos that follows the timely warning, Hawes comes to depend on Dante. On his skills as an investigator, on the steadiness he offers, and on their moments alone when Hawes lets Dante take control. As alliances are tested and traitors exposed, Hawes needs Dante at his back and in his bed. But if the PI ever learns Hawes' darkest secret, Hawes is sure to get a knife to the heart - and a bullet to the brain - instead.

What listeners say about Prince of Killers

Very enjoyable. Hope i can find next part of story. What will happen nextt.

ONE book cut into 3 audiobooks

While this was an interesting listen, before you start the series, know that this is one book cut into 3x5hr audiobooks. I hate it when publishers do this to get as much money as they can from audiobook listeners. Shame on you Tantor Media, this is so not cool. I won't be continuing with the series.

I’ve written a similar review for the second book. The story is great is good narration. However, this 3 book“series” is easily ONE book. It’s utter thievery to charge $13 per book for a FIVE hr narration, when I have purchased better titles that’s three times as long with better writing and the best narration at the same price. I won’t be purchasing from this author again. And if I didn’t love most narrators with Tantor Audio... I wouldn’t be buying any of their titles either. But y’all lucked out on that one. I can’t blame the author alone since I’m sure it’s a joint effort with every money-hungry individual & entity involved. Do better with your selections audible. Just cause y’all can doesn’t mean you should.

Don't purchase the title! This author uses Cliffhangers to strongarm the reader into purchasing her next book, and not even well made Cliffhangers.
A good author has a myriad of tools available to entice the reader into continuing a series. None of those are used here.
Cliffhangers can be used if the reader is rewarded frequently through the book with developed characters and plot and subplot resolutions. that does not happen here.
As a reader I feel cheated and will not subject myself to an author who knowingly damages a story and treats readers so poorly.

This book has everything that I like in an mm romance, who done it, mafia, slow burn, steamy sexy times and a great narration. Be warned it does end on cliffhanger but the next book has already been released on audio.

Narrator Tristan James gave a good, performance. His cadence and different voices are good. At times I do feel a little bothered by his lack of emotion, but overall I love the sound of his voice and I think its fitting for the genre.

Sexy, action packed crime mystery. This was such a treat for me. I love vigilantes and I love crime families. The book kicked of extremely fast and I hoped it's because the next book will give us more in depth look at the different characters. I was not able to connect emotionally to any of them. I felt the Prince was too trusting and inexperienced and very unsure of himself. This made me latch onto Dante and I kind of hoped he get his revenge. The Prince in my eyes is an idiot who doesn't deserve to be King.
The book does end in a cliffhanger. I hope the next audiobook come out soon, I would hate to wait another year to hear the next one.
The sex scenes are hot M/M action. It was a little too short, I hoped the book was a little longer with more world building and character development. It is fresh and promising.

I do recommend this audiobook as part of the series. The cliffhanger is horrible.
Happy Listening.

Great start to the series!

This was a great start to what promises to be a fantastic series. Hawes is the heir to a mob style family, but as his parents are both dead he is young to be carrying the weight of such a responsibility on his shoulders. His self appointed role in the family is looking after everyone else before looking after himself, but who looks after him? This position finally gets filled when Dante comes into his life and it was great to see him providing Hawes with the emotional support he needed so much. This book follows Hawes as he tries to work out who in his gang is trying to kill him. There are twists along the way and the end of the book was fantastic and has left me itching to start book 2 straight away!

I first started this book the moment it released. But I got 60 % in and realized I still had two more books to wait for so I stopped. Now I have finished this and I loved it! It kept me on the edge of my seat the entire time!

what a book oh my God, it is amazing, every minute , narration great !