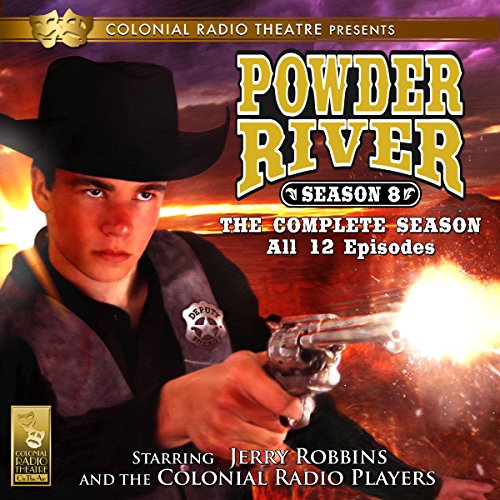 All 12 episodes from the eighth season of the award-winning Colonial Radio Theatre's long-running Western series, Powder River, are collected here as a complete set.

Powder River opens its eighth season with "A Single Bullet", in which Jacob (James McLean) is finally promoted to deputy of Clearmont. His first day on the job proves to be one of the town's darkest. Meanwhile, Doc (Lincoln Clark) is still struggling with guilt from the fire that destroyed his wife, Millie's (Diane Lind), general store, restaurant, and hotel. He is driven to "The Point of No Return", and when he becomes a danger to himself and others, faces a show-down with Britt MacMasters (Jerry Robbins). In the episode "From the Ashes Will Rise", the town of Clearmont discovers that through all the trials and tribulations, they will continue to survive, overcome adversity, and rebuild - on the foundation of their past.

Twelve exciting episodes are included in Season 8, Vol. 1: "A Single Bullet" , "The Man of the Week", "Point of No Return", "Look Towards the Sunrise", "From the Ashes Will Rise", "The Law and His Son", "The Dying Breed" , "Mrs. Octavia Hudson", "The Happy Times", "The Cheyenne Kid", "The Prisoner Transfer, Part 1", and "The Prisoner Transfer, Part 2".

Powder River is a full-cast audio drama written and directed by Jerry Robbins and produced by MJ Cogburn, with music by Jeffrey Gage and cover art by Jeffrey Hayes.

What listeners say about Powder River: The Complete Eighth Season