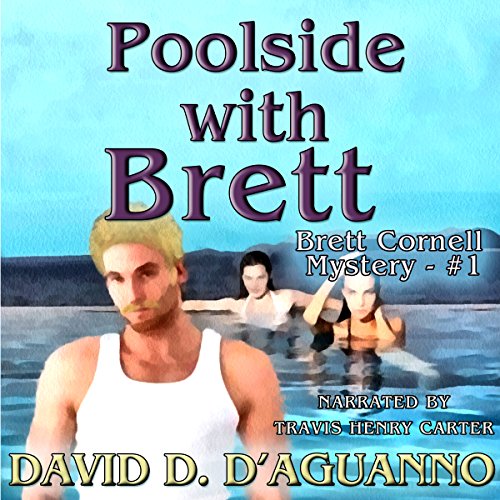 Private detective Brett Cornell believes that he's never had it so good.

He's been on a winning streak playing poker in private games being held in the back room of one of his favorite night spots. He's recently been "discovered" by an exotic-looking beauty who specializes in homemade adult films.

In addition, he's been hired to track down a certain missing husband and bring him back home to his anxious wife. His life, however, takes a sudden turn for the worse when he opens the trunk of his car one evening and finds the missing husband's murdered corpse stashed away inside of it. A set-up for a murder rap?

Set in the late 1980s, Poolside with Brett is the first in a series of novels featuring the tough and crass "unscrupulous bastard" himself - a rude, wise-cracking private detective who happens to be a hugely successful ladies' man, thanks largely to what he immodestly refers to as his "Adonis-like features".

In a tale involving murder, blackmail, an unexpected suicide, and other assorted acts of violence and deceit, Brett learns the hard way that there's a steep price to be paid for being such an unscrupulous bastard - and listeners may very well feel that he gets exactly what he deserves, and more!

This audiobook is entertaining although at times occasionally the humour went a bit too far but then again we are witnessing Brett and not the author talking. The book is well written.

I love Brett, my mistake was that I started with the 3rd one firs and even so that each book can be read separately, you can see the author getting better as he moves on.
Still I wouldn't miss it for the world, the performance is perfectly done especially that Jersey accent totally amazing.
The best part about Brett is that he speaks what's on his mind none of the politically correct stuff and even that he is such a fool which is what makes him so funny he is also straight with the law and because all those flaws he somehow solves his cases.
It's impossible not to love Brett which is why I hope that all his books will go audio and that there will be more written.
Truly I never loved a character personality like I do with Brett which is why there is no way for me not to recommend this book !!!

Some kind of out of date neanderthal

Brett Cornell is the sort of PI anyone would have to be desperate to employ since he doesn't believe in working for his retainer. Instead he spends his time mostly drinking Heiniken, gambling and indulging his fantasies about his sexual prowess and a hoped for retirement with loads of money..He is a rude, egotistical, sarcastic, Marlborough smoking, lager swilling, spitting,. aggressive, loud mouthed, chauvenistic blonde moustached sleazeball. But he certainly does appeal to the ladies (even when they loath him). He's the larger than life, almost comic hero that the reader can love to hate.. He's great!

Surprisingly, he does have a client - an older woman whose husband is missing and she want Brett to find him and bring him back. But he quickly has other things on his mind, and body, which distract him from the search. Then, just when everything seems to be going his way, things turn messy,. Someone seems to be targeting him.

Narrator Travis Henry Carter does a superb job of becoming the obnoxious hero, who is himself relating the story, conveying character with every line and doing a good job with voicing the other protagonists.

Good story,, great character, the biggest mystery, though, is how did he live to be 36? My thanks to the rights holder who gifted ma a complimentary copy of Poolside with Brett, via FAFY. Really enjoyable fun - this is a series I will certainly want to follow.

Would you listen to Poolside with Brett again? Why?

No, it is a pretty simple story and it was easy to keep track of what was happening throughout the book. I will be reading the next in the series as I want to see what Brett gets up to next.

I found all the characters reprehensible, especially our leading man. I really can't think of one redeeming feature I can give to Brett. He is a misogynist, sexist,mean,ego driven,vain and in some instances a buffoon totally unlikable , BUT there is almost something endearing about him. You want to see how he handles the situations he gets himself into. You can't believe he treats people the way he does and yet they come back for more.

Have you listened to any of Travis Henry Carter’s other performances? How does this one compare?

No have not listened to him before. His execution of the many characters is exceptional, even his women. I actually had to make sure it was not a dual narration and that Travis is the sole narrator. His accent reminds me of Dean Winters, the actor.

Moved me to anger perhaps. We first meet Brett in a club at a poker game, after he has failed to pay his bar bill, he gets hit on by a couple of pornographers who recruit him for their next film. He is so arrogant he belives all the praise they heap on him.
BUT, Brett is also a private detective and in the middle of this filming stint he gets a case of a missing husband. Things go wrong as can be expected as Brett doesn't make his case a priority he is too busy getting laid- constantly and trying to talk himself out of tricky situations.

Initially this character made me so angry and I was going to give up on the audio, but I kept giving it one more chapter, then another and even though I rolled my eyes a lot it is quite a fun "read".

I was gifted this book by the author in return for an unbiased review.

The start of something great...

If you're a mystery lover, and this is your first Brett Cornell experience, here's what you can you can expect: Do away with your cunning detective or weathered cop and replace him with a dashing, sociopathic lunatic with a lucky horseshoe up his a**. Replace your repetitive, stereotypical-character interviews with drunken, violent, sexual escapades. In essence, replace your hackneyed mystery novel with something wildly compelling and truly unique. Easily my favorite mystery series ever written. Highly recommended!

Poolside with Brett is an outstanding listen....

Would you consider the audio edition of Poolside with Brett to be better than the print version?

I've only listened but the voice acting was spectacular.

I liked the place in time shout outs and apparent homage to classic mystery writers of a bygone era.

Have you listened to any of Travis Henry Carter’s other performances before? How does this one compare?

While I would have liked to have listened to the book in one sitting it was ideal for workouts and varied tasks though some of the rougher moments made it inappropriate for the school commute.

Poolside with Brett was well written and well voice. It is a bit blue at moments and somewhat a product of its time but with suspension of disbelief an acceptance that Brett is a douchewaffle who is a bit delusional about the legendary status of his man-beastliness, it a very good listen.

I loved this book so much because Brett is the type of character that you love to hate. He thinks he's Gods gift to women everywhere and his cockiness works so well with the story.

The narrator was perfect for this story. He really pulled off what I would think a misogynist from Rhode Island would sound like. His narration of the other character was great as well and he really made the story great!

Overall the story is fun and interesting. Anyone who isn't afraid of some cursing or vulgar content will love this story! I just got the second book and can't wait to start listening!

By the synopsis' own description, to call the main character an unscrupulous bastard is really an understatement. To best characterize him, i'd say it is a Jersey Boys meets ultra-
misogynist. If you happen to be a big fan of men who think they are god's gift to women while simultaneously treating them like objectified garbage, then this book is for you. I was convinced the main character was a farce or a satire until i realized that simply wasn't the case. Not being a fan of that type of character, nor a big fan of gratuitous &amp;quot;adult content&amp;quot; (of which there is plenty), i have a hard time rating the story very highly. I did give the story a 3-star rating because i know there are plenty of people out there that love this stuff, so to them i'm sure it is perfect.

The narration was well done and captured the characters very well. I am impressed with the narrators ability to deliver some of those god-awful sexist lines while not breaking character. No way i am talented or professional enough to be able to do that! Props to you Mr. Carter.

Overall: If you love hearing women objectified, treated like mere sex objects with zero IQ and posses no societal value otherwise, then you will love this book. For all else, you've been warned.

Brett is such a jerk that I can't help but like him! Is he crude, lacks morals and downright idiotic, yes. But he is a character and having read the other books in this series, I was totally prepared for the beginning. The narration was excellent. The author does a great job with the characters and plot. I like the wit of the author and if you truly get it, you won't be so offended (Brett is a Grade-A Douche)! I look forward to reading the other books in this series. I was given this free review copy audiobook at my request and have voluntarily left this review.

you can't help falling in love with this megalomaniac man. brilliant writing and narrating. love this book.

Brett is hilarious! Women dig him and he knows it. It’s interesting how he’s still able to solve mysteries. I can’t wait for the next story.

This was my first David D. D'Aguanno's book. It's a good and hilarious story. Brett is a womanizer and a jerk and we love to hate/love this guy. The narration was good. Good start for this Series.

A character you will love to hate.

Brett is one of those characters you will love to hate. When he is faced with murder charges part of you hope he can't talk his way out. Seriously, a good storyline, and a good start to a series.

The narrator does a very good job with this book and his characterizations are excellent. I wish I could say the same for the story. Brett is not a character that you can like. He’s a narcissistic bully who really doesn’t care about anything but his own pleasure. I just couldn’t get invested in him as a “hero” or even as an anti-hero.