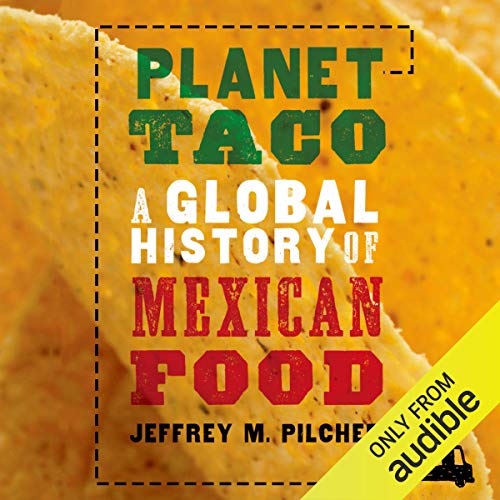 As late as the 1960s, tacos were virtually unknown outside Mexico and the American Southwest. Within fifty years the United States had shipped taco shells everywhere from Alaska to Australia, Morocco to Mongolia. But how did this tasty hand-held food - and Mexican food more broadly - become so ubiquitous? In Planet Taco, Jeffrey Pilcher traces the historical origins and evolution of Mexico's national cuisine, explores its incarnation as a Mexican American fast-food, shows how surfers became global pioneers of Mexican food, and how Corona beer conquered the world. Pilcher is particularly enlightening on what the history of Mexican food reveals about the uneasy relationship between globalization and authenticity.

The burritos and taco shells that many people think of as Mexican were actually created in the United States. But Pilcher argues that the contemporary struggle between globalization and national sovereignty to determine the authenticity of Mexican food goes back hundreds of years.

During the nineteenth century, Mexicans searching for a national cuisine were torn between nostalgic "Creole" Hispanic dishes of the past and French haute cuisine, the global food of the day. Indigenous foods were scorned as unfit for civilized tables. Only when Mexican American dishes were appropriated by the fast food industry and carried around the world did Mexican elites rediscover the foods of the ancient Maya and Aztecs and embrace the indigenous roots of their national cuisine. From a taco cart in Hermosillo, Mexico to the "Chili Queens" of San Antonio and tamale vendors in L.A., Jeffrey Pilcher follows this highly adaptable cuisine, paying special attention to the people too often overlooked in the battle to define authentic Mexican food: Indigenous Mexicans and Mexican Americans.

What listeners say about Planet Taco

This is a pretty interesting survey of the history of Mexican food, especially of the last hundred years or so, with particular interest in Mexican food as it exists in public places (in restaurants, and as a commercially manufactured product). Lots of interesting discussion of the way that the cuisine has changed over time and how those changes have informed ideas of perceived "authenticity", as well as other historical and sociological insights. My one complaint, and it felt like a substantial issue, was that the narrator, while having a a pleasing voice to listen to, seems to have almost NO understanding of the pronunciation of Spanish and Mexican words. I can forgive the occasional bad vowel or confusion about letters like j, h and g, and I'm certainly not saying an English speaker has to imitate an accent or pronounce every word perfectly, but this guy has clearly had so little exposure to Spanish that he pronounces a huge percentage of the words flat-out wrong. Accents on the wrong syllable, incorrect vowels (o for a, for example), transposed or added letters, and of course all the usual mistakes that we English-speakers usually make in Spanish, but oh man, on almost every word! It was distracting and cringe-inducing. Additionally, he would often pause strangely before the foreign-language words, as if he was screwing up his courage to attempt the difficult task just ahead of him, and giving the reader a little heads-up that he knew he was about to mess something up. There were also some factual errors that I noticed, like translating "naranjo" as "orange". ("Naranjo" is the orange *tree* that produces the fruit, not the fruit itself.) Not a huge deal on its own, but incorrect details like that give me doubts about the rest of the research and scholarship. All and all, a fun and interesting book, but it would have been a much better listen with a narrator who had more ease and familiarity with speaking Spanish.

This interesting book about the history and globalization of Mexican food was ruined for me by the narrator's mispronunciation of Spanish, French, and even English words. I don't think he has ever heard Spanish spoken and would basically make it up as he went along. I almost crashed my car when he said "pan dulce" with the Italian "ch" sound, or when he pronounced "diario" like the English "diary" with an "o" at the end. And when talking about the Zapatistas in Chiapas (mispronounced as well), he said that they covered their heads with "baklavas" - I assume he meant "balaclavas" and not the sticky pastry. There are some English words that may be unfamiliar for many Americans but as a professional narrator, he should know how to pronounce "affluent" and "eponymous".

For this reason, I would not recommend this audiobook to anyone. The print book, yes.

Well researched and fascinating, but I wish I had read it instead of listening. The reader is downright languid, and his monotone approach saps the text of too much of the obvious passion of the author.