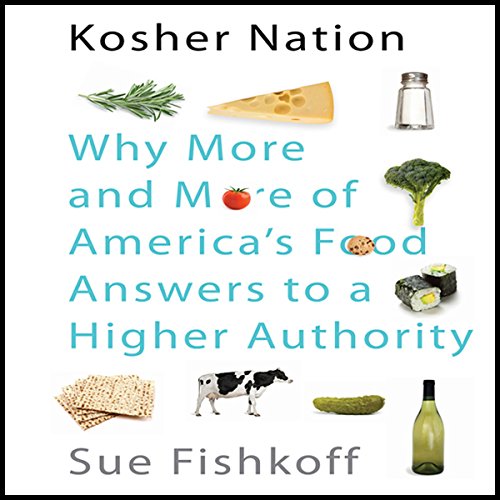 Why More and More of America's Food Answers to a Higher Authority
By: Sue Fishkoff
Narrated by: Walter Dixon
Length: 14 hrs and 34 mins
Categories: Home & Garden, Food & Wine
5.0 out of 5 stars 5.0 (1 rating)

Kosher? That means the rabbi blessed it, right? Not exactly. In this captivating account of a Bible-based practice that has grown into a multibillion-dollar industry, journalist Sue Fishkoff travels throughout America and to Shanghai, China, to find out who eats kosher food, who produces it, who is responsible for its certification, and how this fascinating world continues to evolve. She explains why 86 percent of the 11.2 million Americans who regularly buy kosher food are not observant Jews—they are Muslims, Seventh-day Adventists, vegetarians, people with food allergies, and consumers who pay top dollar for food they believe “answers to a higher authority”.

Fishkoff interviews food manufacturers, rabbinic supervisors, and ritual slaughterers; meets with eco-kosher adherents who go beyond traditional requirements to produce organic chicken and pasture-raised beef; sips boutique kosher wine in Napa Valley; talks to shoppers at an upscale kosher supermarket in Brooklyn; and marches with unemployed workers at the nation’s largest kosher meatpacking plant. She talks to Reform Jews who are rediscovering the spiritual benefits of Kashrut and to Conservative and Orthodox Jews who are demanding that kosher food production adhere to ethical and environmental values. She chronicles the corruption, price-fixing, and strong-arm tactics of early-20th-century kosher meat production, against which contemporary kashrut scandals pale by comparison.

A revelatory look at the current stat of kosher in America, this audiobook will appeal to anyone interested in food, religion, Jewish identity, or big business.

What listeners say about Kosher Nation

Must read on for those interested in food culture

This book is well written and well paced. It covers many topics surrounding kosher law without becoming repetitive or tedious.

I enjoyed the content and narrator spoke clearly but it was obvious that he was not familiar with some of the words he needed to read. I cringed every time he read a transliterated Hebrew word the way it was spelled rather than the way it should have been pronounced.

the law of god mostly

every thought about how this all work and what it takes this book will make you rethink if you should or should not eat this way. it could be a great way to get safer food you would think. it would and does for the most part but there cost to it to take a listen and see what answering to a high power means.