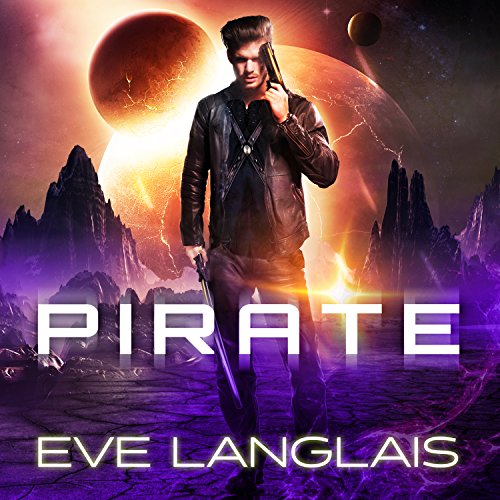 Earth: a space pirate's dream when it comes to booty but not a good place to hide when bounty hunters come looking. Pulling up stakes means Rafe must leave his vintage trailer behind, but in the process he acquires a passenger, a mouthy female who seems to think she's calling the shots. She'll soon learn who's the captain. And it isn't Annabelle, his sassy ship.

A true red-blooded male, Rafe does his best to teach Emma her place in the universe, but her human attitude gets in the way. So why doesn't he sell her when he gets the chance? Damned if he knows, but despite his motto of "the universe revolves around me", he finds himself putting his life in peril to save hers. But that doesn't mean he's letting her in on all his secrets. Some things a man has to carry alone, and some revelations a pirate will kill to keep.

The universe might be out to get him, but he's not giving in without a fight.

What's Not Too Love?

From first to last, the story is enthralling. Be warned, the story does contain a cliffhanger, and nothing is resolved in this tale, but don't let that deter you as it is a hell of a ride.

I really love listening to Eve Langlais stories, and it sadness me to say this, but I could not finish Pirate. I tried multiple times but think I will have to read the story versus listening to it.

Chandra Skyye is a great narrator. She did a good job with the dialogue, used various tones, and inflections to convey the different emotions, but I just don't know if this is her "genre". I could be wrong, but I think Pirate was intended to be a funny, and Chandra Skyye's narration was more on the serious side. This is just my opinion, but when you are reading a funny story, it's like telling a joke, you have to get the timing and punch line right for the joke to be funny. I believe the same is true for delivering funny, witty, sarcastic dialogue in stories, you have to put emphasis on the right words. I would definitely listen to more audios by Skyye, but would look for audios that were more on the serious side rather than funny.

Since I did not finish the story, I wanted to be fair and gave the audio version three stars.

This is actually a second “reading” for me, in preparation for the rest of the series. I had forgotten how funny it was. I do have to say, I think my favorite character is the sarcastic Ship’s AI. The main characters were pretty good too:-) Eve Langlais never disappoints.

Held my interest throughout the entire story. Audio reader kept the story thrilling and interesting. will be purchasing the rest of the series in the future. Can't wait to hear what happens with Raph and Emma

Disappointed in this one

Thank goodness I didn’t waste a credit and got it as part of the Romance thing. I’ve enjoyed Eve Langlais before but not this time. It was too incomplete like half a story, not just a cliffhanger (which I don’t mind sometimes). I found the computer AI personality to be annoying and the comments about her programming being bad repetitive. Nothing was resolved in this story other than they jumped into bed. It was a waste of my time I’m afraid. Performance was okay not great but okay.

Taming of the Shrew

Mostly the plot is about the characters adjusting to each other. And a lot of tedious background. The plot is so slim you can miss it if you skip ahead. Ends in a cliffhanger

If you enjoy men and women fighting until one of them gets Tamed, go ahead.

I hated the main guy in this, he came across as very chauvinistic and overly sexually aggressive. I like a dominant character but this was the opposite of sexy to me. I made it over a little half way hopping things would get better or at the very least the story line would pick up, but alas I DNF. I’m glad I could try this with the Romance package versus wasting a credit.

This book is action-packed; never a dull moment. Witty banter between the lead characters keeps you smiling. I am looking forward to the next book in the series.

The narration was YUCK.

Made it through 10 min. The voice of the male character was ridiculous. Imagine a teenage boy failing to pull off a Russian accent. Combined with over the top sex talk about the size of his junk, and convenient holes...*shudder*. I gave the book 4*, benefit of the doubt since it might have improved as it went along. Narrator was otherwise fine, tragic decision to use weird accent.